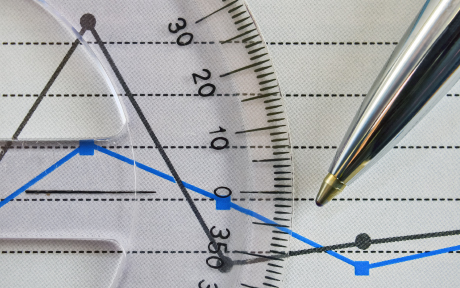 As a complement to core inflation measures and other approaches to estimate trend inflation, we have constructed the UIG. A more extensive discussion of this measure can be found in this Economic Policy Review article, with further details provided by our New York Fed staff report “The FRBNY Staff Underlying Inflation Gauge: UIG.” Here, we highlight several key features of the UIG to help motivate and explain the methodology and model specification used in its derivation. Most importantly, the design of the UIG is based on the premise that movements in trend inflation are accompanied by related changes in the trend behavior of other economic and financial series. Consequently, we examine a large data set to identify the common component of other economic and financial series and then focus on the persistent part of the common component.
To do so, we apply statistical techniques to extract a small number of factors. These factors can be thought of as proxies for the fundamental shocks that drive the common fluctuations in the series and explain a significant amount of their co-movement. The statistical technique—known as a dynamic factor model—provides a very tractable framework to use large information sets, with the extracted factors serving as the basis to construct the UIG. In particular, the UIG is the common persistent component of monthly inflation.

Estimated UIGs for CPI Inflation
We apply our estimation strategy to two data sets. The first data set includes 223 disaggregated price data series in the CPI. The second data set includes the disaggregated price data as well as a wide range of macroeconomic and financial data for a total of 346 series. Importantly, these additional series include variables measured at a monthly frequency, as well as at a weekly and daily frequency. We refer to the first measure as the “prices-only” UIG and the second measure as the “full-data-set” UIG. The UIGs are estimated using data for the period January 1993 through April 2017, with the post-1995 series plotted in the chart below along with the twelve-month change in the CPI. 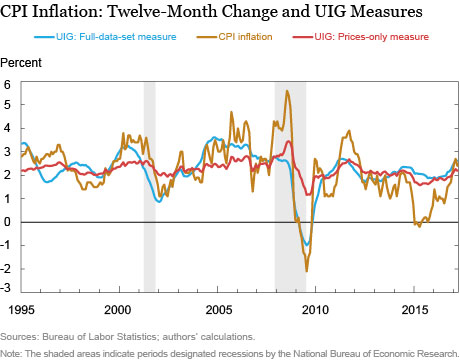 The UIG versus Traditional Core Inflation Measures
While the previous discussion focuses on the behavior and features of the UIGs, it is also useful to provide a comparison of the UIGs to alternative measures of trend inflation. Because of their popularity and widespread use, three core inflation series were selected for comparison: the CPI excluding food and energy prices, the weighted median CPI, and the trimmed mean CPI. The latter two series are produced by the Federal Reserve Bank of Cleveland and their construction is described here. For the comparison, it is important to recall that the main difference between the UIGs and the core inflation measures is that the UIGs add, rather than remove information to signal changes in trend inflation. The chart below depicts the full-data-set UIG along with the twelve-month change in the various core inflation measures.


Marlene Amstad is professor of practice in economics at the Chinese University of Hong Kong, Shenzhen, and research fellow at the Federal Reserve Bank of New York.

To readers inquiring about updates to the UIG:

Thank you for your interest in the post. Currently we are not in a position to release the UIG data series. The New York Fed will start providing monthly updates of the UIG charts for the CPI later in 2017.

This is obviously an interesting tool, not least from an investor’s point of view.

Do you plan to publish updated UIG estimates? If not, is it possible to somehow get access to the numerical data on the UIG?

What makes you think that there is an underlying rate of inflation that is different than the actual data? This is not quantum mechanics, where you can indirectly test for the wave function. It's possible that inflation has become more like the markets, with non-continuities and instantaneous jumps.