« Just Released: More Credit Cards, Higher Limits, and . . . an Uptick in Delinquency | Main | “Hey, Economist!” How Was Your Ph.D. Internship? » 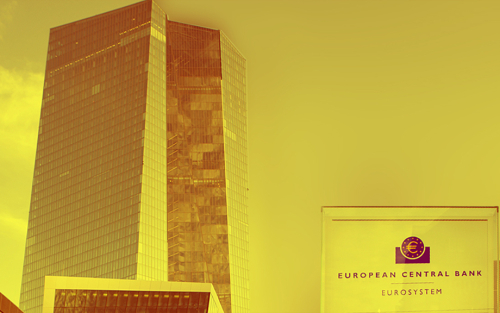 In a previous post, we compared the Federal Reserve’s discount window with the standing lending facilities (SLFs) at the Bank of England (BoE), the European Central Bank (ECB), and the Bank of Japan (BoJ). We showed that the Fed’s discount window was less integrated with monetary policy than the SLFs of the other central banks. In this post, we observe that the counterparty and collateral policies of the Fed’s discount window are similarly less integrated with the practices involved in monetary policy operations, in comparison with the other central banks.

Counterparty Policies: Who Gets to Borrow?
The three foreign central banks allow a broad set of counterparties—including banks and nonbank financial institutions—to access their SLFs, although actual practices vary widely (see table below). Access to the BoE’s SLFs had previously been limited to banks, but in 2015 certain broker-dealers and financial utilities deemed critical to the financial system were also permitted access to the lending facilities. Since its inception, the ECB has in principle allowed all regulated monetary financial institutions, including nonbanks, access to its monetary policy operations and facilities. In practice, however, only institutions with banking licenses have thus far been able to participate in the ECB’s monetary policy operations and facilities. The BoJ is the least restrictive of the four central banks, allowing a wide range of banks and nonbanks access to its SLF with no distinction made by institution type. Besides banks, counterparties of the BoJ include securities companies, securities finance companies, and money market brokers (or “tanshi” companies). 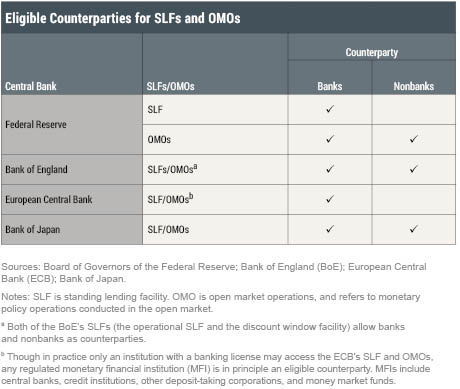 In contrast to the three foreign central banks, the Fed is limited by statute (Section 10B of the Federal Reserve Act) to make discount window loans only to banks. Moreover, not all banks are eligible to borrow under the primary credit program; financially weaker banks must borrow under the secondary credit program, where the terms are more punitive and the borrowings more scrutinized. Of the four central banks discussed in this post, the Fed is the only one to use separate programs for banks in different conditions. The other central banks allow all solvent institutions to borrow under the same SLFs, provided they have adequate collateral.

Despite its bank-only access policies, as the crisis of 2007-08 spread beyond banks to the financial system more broadly, the Fed created temporary lending facilities that enabled it to lend to nonbanks such as securities broker-dealers, under the authority of Section 13(3) of the Federal Reserve Act. But since passage of the Dodd-Frank Act in 2010, the Fed’s ability to invoke these special authorities has become more constrained.

Collateral Policies: Against What Assets Do Central Banks Lend?
Like many lenders, central banks mitigate the credit risk of lending by requiring collateral. They may differ, however, in the range of assets they accept as collateral at their SLFs (see table below). The BoJ and ECB accept an array of investment-grade fixed income securities and loans to the private and public sector, although only if these assets are denominated in the domestic currency. The BoE has two SLFs, one of which serves a monetary policy role and accepts only liquid, high-quality sovereign debt as collateral, while the other serves a financial stability role and accepts a broader set of investment-grade securities and whole loans as collateral, in exchange for high-quality sovereign debt. Note that the BoE accepts securities in both domestic and foreign currencies. Similar to the other three central banks, the Fed accepts a broad range of collateral at its discount window, including domestic and foreign securities and loans. 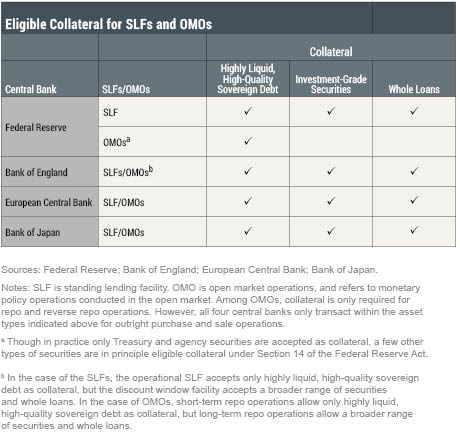 Why Do the Fed’s Discount Window and Open Market Operations Policies Differ?
One explanation for the difference may be that, for historical reasons, the Fed’s discount window and open market operations function under different statutory authorities with different counterparty and collateral requirements. The statutory provision governing open market operations (Section 14 of the Federal Reserve Act) specifies that direct obligations of, or obligations fully guaranteed by, the Treasury or any agency are eligible for the Fed’s open market operations; but the provision does not limit the potential counterparties. By comparison, the statute governing the discount window (Section 10B) states only that loans must be secured to the satisfaction of the lending Federal Reserve Bank, without specifying the type of collateral, but it limits discount window borrowers to banks.