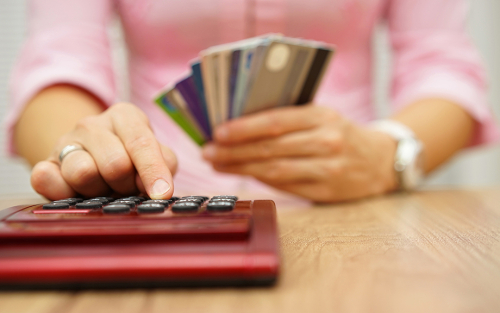 Today the New York Fed’s Center for Microeconomic Data released its Quarterly Report on Household Debt and Credit for the second quarter of 2017. Overall debt balances increased in the period, continuing their moderate growth since 2013. Nearly all types of balances grew, with mortgages and auto loans rising by $64 billion and $23 billion, respectively. Credit card balances increased by $20 billion, recovering from the typical seasonal first-quarter decline. The overall balance surpassed its previous peak in the first quarter. We wrote here about how the new peak poses little concern in and of itself—after all, the debt’s composition and characteristics are now very different than in 2008. There are, however, aspects of the household balance sheet that warrant close monitoring. For example, last year, we pointed out that there had been a moderate rise in the number of credit cards issued to nonprime borrowers. Separately, last quarter we noted an uptick in delinquency transitions for credit card balances, and we observed another climb in this quarter. So here, we further investigate how credit card balances, accounts, and delinquencies have evolved over the past year.

The chart below depicts card issuance and account closure, by credit score band. On net (new accounts minus closed accounts) there’s been an increase in credit card accounts, a trend observed since the sharp decline prompted by the Card Act in 2009. Disaggregated by type of borrower, new accounts issued to nonprime borrowers (with scores below 660) were flat in 2016 after increasing the previous two years. So while overall issuance continued to increase this year, that’s due to more cards being issued to prime borrowers with credit scores over 660. 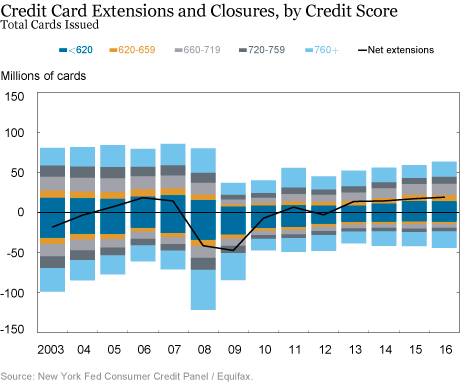 Similarly, we see continued growth in aggregate credit limits, with disproportionate increases to higher credit score borrowers (see chart below); aggregate limits have grown notably in the last year, but the growth is due largely to limit extensions to higher score borrowers. The median limit on new cards for borrowers with scores over 760 was $8,500 in 2016 while the median limit of borrowers with credit scores under 620 was $750, as banks manage risks inherent in unsecured debt to nonprime borrowers. So, while we see some moderate increase in the limits of nonprime borrowers, it’s a very small piece of the aggregate, and that mitigates risks stemming from the increase in card issuance to lower score borrowers. 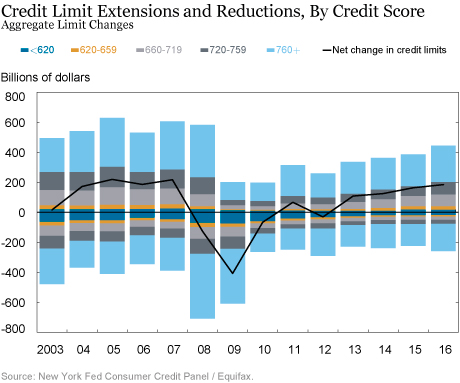 We noted last quarter that transitions into delinquency for card balances had increased, following upticks in the two previous quarters. The transition into serious delinquency is defined as the balances that have gone from current or early delinquency into ninety or more days late, as a percentage of the balance from the previous quarter that was less than ninety days past due. This growth is potentially concerning, particularly in the context of a strong economy and low interest rates. In the chart below, we disaggregate the delinquency transitions by credit score band. We don’t observe individual accounts in the Consumer Credit Panel for credit cards, so we use the credit score for each individual during the quarter that they’ve most recently opened a new card. We’ve smoothed our data using four-quarter moving sums to minimize seasonal changes. 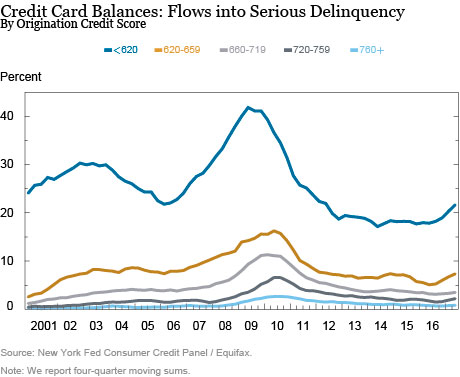 We see a notable increase in the transition to ninety-plus days delinquency primarily in the lower two credit score buckets, so the consumer distress appears to be limited to those borrowers (although there are small increases in the transition rates for the prime groups as well). The restoration of access to credit for lower score borrowers has been a long time in the making, and the lower delinquency transition rates between 2013 and 2015 might have been anomalous, primarily owing to tighter standards during the Great Recession and after. Looking over the full span of data, the latest transition rate of 22 percent per year for subprime accounts is still low. Nonetheless, the persistent rise in the recent series is something we will monitor.