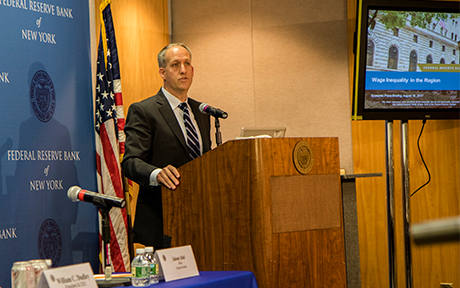 Importantly, the effects of these economic forces on workers have been geographically concentrated, which helps explain why the degree of inequality varies across the country. Most fundamentally, the demand for skilled workers has been especially strong in large metropolitan areas like New York and San Francisco, while it has been more subdued in other parts of the country. In addition, the decline in demand for lesser skilled workers has been highly localized, particularly in the Great Lakes region where the number of manufacturing jobs has plummeted over the past few decades. Reinforcing these geographic patterns of demand, agglomeration economies—that is, the benefits that arise when people and firms locate in large numbers near one another in cities—have helped boost the productivity and wages of skilled workers, particularly in large urban areas. And skilled workers have been attracted to large metropolitan areas because of the availability of amenities as well as the high wages these areas offer for skilled workers.

These three factors—strong demand for skilled workers, agglomeration economies, and the selective migration of skilled workers—have worked together to push up wage inequality to particularly high levels in the largest metropolitan areas in the country. San Francisco, for example, ranks among the most unequal metros in the nation, as does the New York–Northern New Jersey metropolitan area. At the other end of the spectrum, many of the least unequal places in the country have seen more subdued wage growth for all workers, especially higher skilled workers. Much of the Great Lakes region fits into this category, including most of the metropolitan areas in upstate New York.