« The New York Fed DSGE Model Forecast–November 2017 | Main | How Much Is Priced In? Market Expectations for FOMC Rate Hikes from Different Angles » 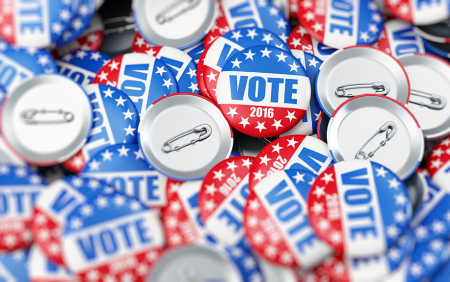 Yield spreads of high-yield (HY) corporate bonds measure, to a large extent, the additional credit risk of the bond relative to a Treasury bond. As shown below, yield spreads (red line) fell leading up to the election, increased in the two weeks just before election week, then decreased again following the election and through February 2017. Investor sentiment (blue line) is measured by the percentage of individual investors who are bullish minus the percentage who are bearish in surveys by the American Association of Individual Investors (survey-based sentiment measures are recommended). Sentiment improved sharply by 20 percentage points following election week and continued to be positive until January 2017, coinciding with the decline in yields during this period. 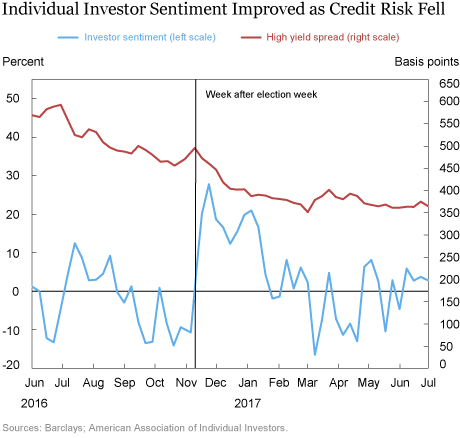 But Fundamentals Were Also Improving

In the last months of 2016 and the beginning of 2017, positive corporate and economic news likely supported lower yield spreads. For example, the change in twelve-month ahead expectations of company earnings per share had been rising since the summer of 2016 while the ratio of debt to equity, or leverage, was steady (see the following chart). 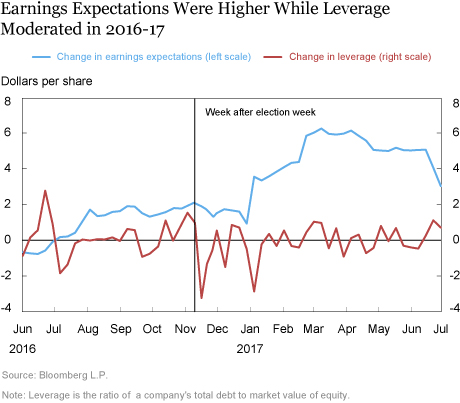 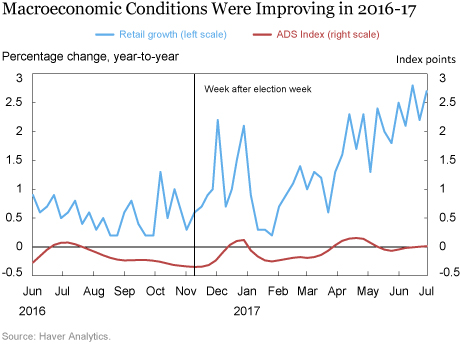 Was It All Fundamentals or Did Sentiment Also Drive Credit Risk?

The bar chart below shows the estimated contribution to weekly changes in yield spreads of changes in leverage and volatility (gold), macro indicators (dark gray), liquidity (light gray) and sentiment (blue) along with the actual yield spread change (black line). Lower stock volatility and higher stock prices (resulting in lower market-implied leverage) following election week implied a large drop in yield spreads. Positive news on interest rates and macro indicators also drove down yield spreads. In the three weeks before election week, sentiment changes contributed minimally to yield spread changes but did so moderately during election week and in the following three weeks. However, to the extent that stock market performance was driven in part by sentiment, the contribution attributable to sentiment may have been larger. 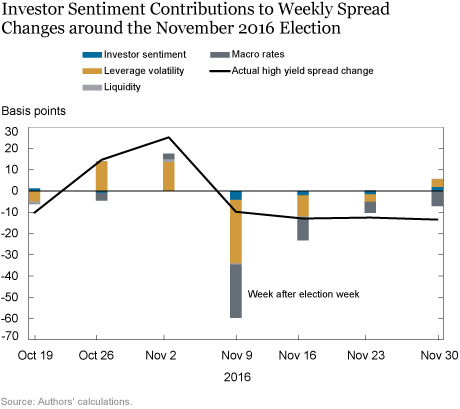 How Long Did the Sentiment Effects Last?

The effects of investor sentiment on yield spreads continued to be apparent through the first quarter of 2017 but died out by the second quarter. Therefore, while sentiment effects were associated with the election period and pushed up bond prices for some time afterward, they may not have affected the longer-term path of bond prices.