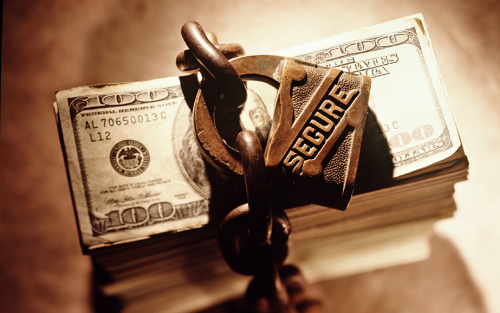 What Is a Safe Asset?

In an idealized setting, a safe asset is easy to define. It is an asset that pays off a fixed amount with absolute certainty at some future date. In the parlance of economics, it means investing in the complete set of Arrow‑Debreu securities. However, complications arise as soon as we consider this definition in more detail. Is there ever absolute certainty? Does the asset have to mature for the payoff to realize or can it be sold instead? Does the payoff have to be certain only at a particular date or over a whole time period? How far in the future is the certainty needed? Is the payoff amount fixed in real terms or in nominal terms?

Consider, for example, U.S. Treasury securities, which are considered to have absolute safety of repayment, making them the prototypical “safe asset.” Among U.S. Treasuries, there are ones guaranteeing nominal repayment and ones indexed to inflation, thus guaranteeing repayment in real terms. Are the latter—Treasury inflation-protected securities (TIPS)—necessarily the “safer” assets? Perhaps not to an investor who may have to sell the assets before they mature and therefore considers the higher liquidity of nominal Treasuries an important aspect of safety. In addition, investors in either of these securities have to worry about the fact that future changes in interest rates make the prices of long-term Treasuries risky.

In practice, safe assets are those with a very high likelihood of repayment, and are easy to value and trade. These assets play an important role in the financial system. Because of their safety they provide advantages above and beyond their risk-adjusted return. Examples are being a store of value, facilitating trade between counterparties, or being used as collateral to raise funding at a moment’s notice. Importantly, their high likelihood of repayment makes them immune to asymmetric information about their ultimate payoff, which allows investors to value them with a high degree of certainty and makes them easy to exchange for other assets or goods. Each of these features implies that investors are willing to forgo yield in order to reap the additional benefits safe assets provide. As a result, safe assets typically trade at a premium, known in the academic literature as a “convenience yield,” which reflects the nonpecuniary benefits investors receive for holding them.

Throughout history, safe assets have taken on many different forms, from precious metal coins, to bills of exchange, and fairly recently to government debt (Gorton 2017). In today’s financial system, the prime example of a safe asset is U.S. Treasury securities. These securities are considered to have zero credit risk, can be easily sold, and can be used as collateral either to raise funding or to post as margin in derivatives positions. Treasuries are immune to information asymmetries about their ultimate payoff, making them particularly useful as a store of value and to facilitate trade. There is substantial empirical evidence that because of these valuable features, investors in Treasuries accept a lower yield on these assets. Krishnamurthy and Vissing-Jorgensen (2012) estimate that Treasuries’ safe asset status translates into an average yield reduction of 73 basis points. This yield spread can be interpreted as a measure of the convenience yield embedded in Treasuries.

However, Treasuries differ significantly in maturity and that affects their safe asset characteristics. Treasury bills (T-bills) have the shortest maturities and are often thought of as “money-like” assets, that is, assets similar to physical currency. Because of this moneyness, yields on short-term T-bills are typically lower than those on comparable assets. We illustrate this difference in the next chart, comparing the yield on the four-week T-bill to the one-month overnight index swap (OIS) rate. 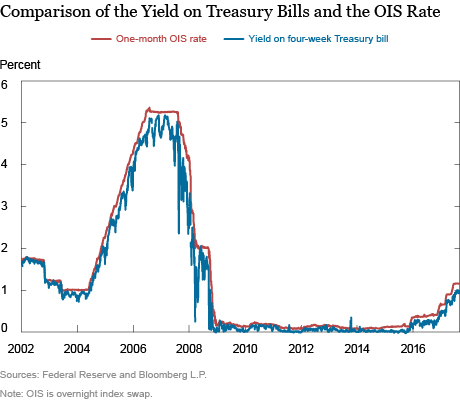 Both of these investment vehicles have identical payoffs, with very similar risks, yet the T-bill trades at a considerably lower rate. The main difference between these two investment vehicles is that the OIS is merely a contract between counterparties with an almost risk-free payoff but is lacking the other safe asset benefits of a T-bill.

A longer-horizon view of the convenience yield of very short-term T-bills is the term structure of their realized excess returns. Carlson et al. (2016) calculate the average one-month holding period excess return of T-bills with different maturities, shown in the chart below. The difference between the excess return of a three-month and a one-week T-bill is approximately 34 basis points, which is abnormally large for the relatively small difference in term risk between these two investments. This gap suggests that shorter-dated T-bills have a convenience premium over longer-dated ones. 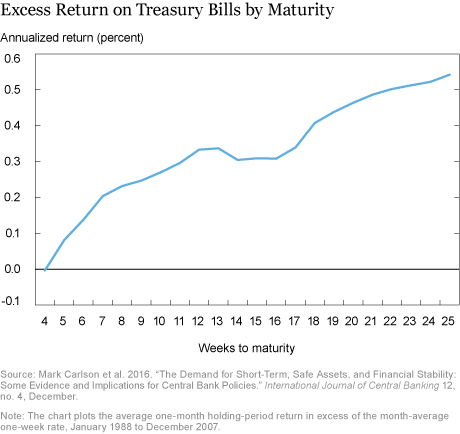 Although there is considerable focus on the safe asset properties of short-term T-bills, longer-term U.S. Treasury notes are also an important safe asset. Even though longer-term Treasuries are exposed to interest rate risk, they have zero credit risk, can be seamlessly used as collateral, and naturally do not suffer from any informational asymmetries about their ultimate payoff. In addition, longer-term Treasuries have a unique benefit which differentiates them from T-bills and makes them particularly useful as a safe asset for investors with longer horizons: they tend to appreciate in times of aggregate market downturns; that is, they have “negative beta,” providing investors with a valuable hedge for aggregate macroeconomic risks (Caballero and Farhi 2017). This example suggests that short maturity of an asset is not necessary for its usefulness as a safe asset.

Importantly, the additional premia embedded in T-bills and Treasury notes is good news for the United States. Their safe asset status implies that the U.S. Treasury can issue bonds at lower rates, reducing the government’s debt burden, and ultimately benefiting U.S. taxpayers.

Thomas M. Eisenbach is a senior economist in the Federal Reserve Bank of New York’s Research and Statistics Group.

Sebastian Infante is a senior economist at the Board of Governors of the Federal Reserve System.