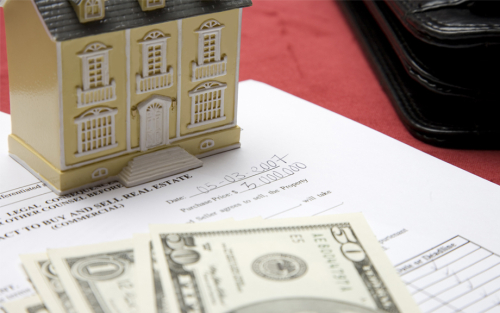 What Is a Jumbo Mortgage?

Most residential mortgages in the United States are securitized through the large and liquid agency mortgage-backed securities (MBS) market. (MBS are simply bonds backed by pools of mortgages.) Agency MBS carry a credit guarantee either from the government-sponsored enterprises Fannie Mae or Freddie Mac, or the government agency Ginnie Mae. This guarantee insulates agency MBS investors from credit risk.

Jumbo mortgages, by contrast, cannot be securitized into agency MBS. Fannie Mae and Freddie Mac are prohibited from acquiring these loans because they exceed a loan size cutoff known as the conforming loan limit. The national single-family conforming loan limit is currently $453,100, although higher limits apply in some geographic areas. Consequently, jumbos are generally kept on the balance sheet of the originator, usually a commercial bank, rather than being securitized.

Since credit risk for jumbo mortgages is primarily borne by banks rather than by the federal government, interest rates and availability of jumbos provide useful information about private-sector appetite for mortgage credit risk.

Jumbo interest rates are also affected by shifts in the yield curve as well as by mortgage demand and other factors. But since many of these factors also affect conforming (non-jumbo) mortgages, we can control for them—and isolate the influence of mortgage supply—by studying movements in the spread between jumbo mortgage rates and conforming interest rates. A decline in the jumbo–conforming spread, particularly for risky loans, can indicate an increased credit risk appetite of banks.

The left panel below shows that jumbo and conforming mortgage rates tend to move together. But even so, the difference between the two rates—the jumbo–conforming spread—fluctuates significantly over time (right panel). The spread spiked sharply during the 2007-09 financial crisis, reflecting heightened credit risk and a freeze in nongovernment securitization markets, where jumbo mortgages were often funded at that time. The jumbo–conforming spread has fallen significantly since then, although it remains elevated relative to pre-crisis levels. 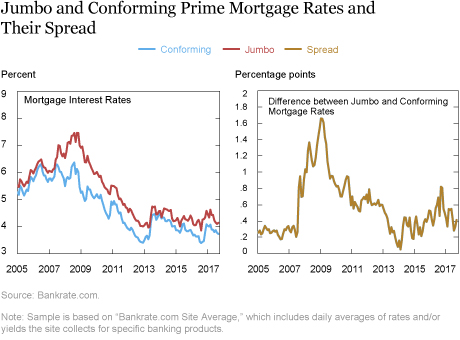 Jumbo Mortgage Pricing and Availability across the Credit Spectrum

The above chart, which is based on low-risk prime mortgages, provides only a partial picture of credit availability and pricing in the jumbo market. In practice, the jumbo–conforming spread is likely to vary significantly with the loan’s characteristics—credit risk in particular.

Below, we present a more nuanced picture of trends in jumbo mortgage credit availability, using data we have collected from an online mortgage platform called Optimal Blue Insight. This service allows lenders who process their mortgages through Optimal Blue (accounting for roughly 20-25 percent of all new mortgages in the United States) to compare their pricing against their peers. Institutions on the platform primarily act as correspondent lenders, meaning that they originate loans intended to be sold to large banks or other financial institutions.

From the Optimal Blue platform we are able to retrieve the distribution of mortgage offers (both interest rates and up-front points) for mortgages with different characteristics in a given local market. These are “firm” offers representing interest rates that would actually be paid by a borrower. Although the platform offers mortgages in many metropolitan areas, to avoid aggregation complications we focus here on a single city, Los Angeles. The trends noted below are generally similar in other large cities, though.

The upper panel of the chart shows the fraction of lenders willing to offer jumbo mortgages (availability) with different borrower credit scores (FICO) and loan-to-value ratios (LTV). The lower panel shows the monthly average offered interest rate, relative to a benchmark conforming loan with a FICO score of 750 and an LTV of 80. This is close to the modal loan originated in recent years. 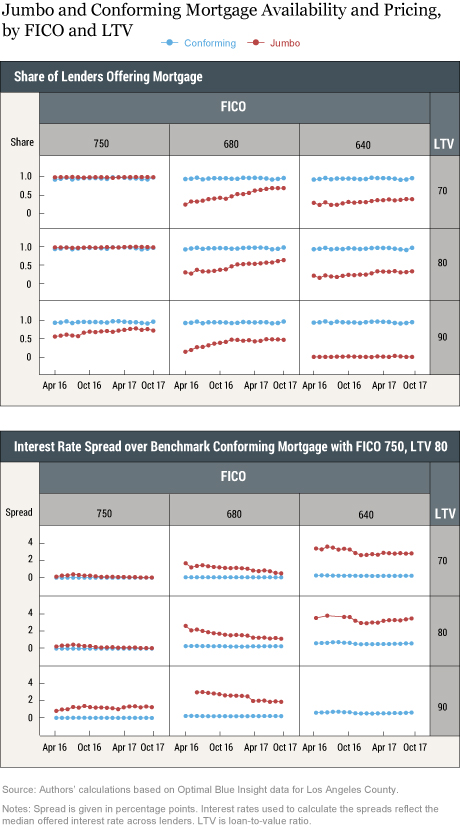 Nearly all lenders are willing to offer the safest jumbos (a FICO score of at least 750 and an LTV no larger than 80 percent), and the interest rate spread over the benchmark conforming mortgage rate is quite low, averaging only 21 basis points.

However, jumbo mortgage availability declines and interest rates rise as credit quality falls (lower FICO, higher LTV). Lenders charge higher interest rates on these loans to compensate for their greater credit risk, and some lenders simply ration credit, choosing not to offer higher-risk loans at all. Notably, virtually no lenders are willing to originate jumbos in the riskiest category, with an LTV of 90 percent and a FICO of 640.

The story is quite different in the conforming market, where the chart shows that interest rates and credit availability are not very sensitive to credit risk. What’s the difference? Remember that conforming mortgages are generally guaranteed by Fannie Mae or Freddie Mac. These agencies charge up-front and ongoing guarantee fees, which are ultimately passed through to the interest rates paid by borrowers. But overall, these fees are only modestly higher for risky loans. (Conforming borrowers are, however, required to purchase private mortgage insurance for loans with an LTV exceeding 80 percent. The cost of this insurance is not reflected in the chart.) 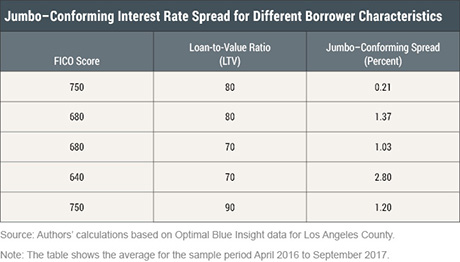 The Jumbos Are Jumping

The charts shown earlier reveal that jumbo credit availability has improved in recent years, consistent with anecdotal evidence (see this February 2016 Wall Street Journal article, password required). The increased availability is especially true for intermediate FICO scores (680 in our data), where the fraction of lenders willing to offer jumbo credit has approximately doubled for all three LTV categories.

Our analysis suggests that banks’ appetite for mortgage credit risk has been increasing over time. Our findings match other evidence that residential mortgage lending standards have eased in recent quarters (including this mortgage index and this Federal Reserve Board lending survey), while remaining substantially tighter than during the housing boom (see this housing credit index). As other observers have noted, banks’ greater willingness to originate jumbo mortgages is likely to continue, given the improving housing market and the attractive yield on such loans (see this October 2016 Wall Street Journal article, password required). Overall mortgage demand will, however, remain dependent on the evolution of long-term interest rates and the macroeconomy.

Akhtar Shah is a senior research analyst in the Bank’s Research and Statistics Group.

Thanks very much for your comment. Regarding the first part, it is difficult to isolate all the drivers of changes in jumbo mortgage supply; of course one cannot rule out that the stock market would have some effect on bank risk appetite. Regarding the second part, we track availability and pricing for mortgages with a constant loan-to-value ratio. Although rising home values would increase equity for existing homeowners, it shouldn’t necessarily lead to reduced interest rate spreads holding the loan-to-value ratio at origination constant. However, if lenders perceive that the likelihood of a home price crash is lower now than a few years ago, because of the strong economy and housing market, that could lead to lower interest rate spreads as we observe in the data. One could argue that lenders should be cautious in extrapolating recent home price trends: as the 2007-2010 period illustrated, the more home prices increase, the further they could potentially fall.

“The charts shown earlier reveal that jumbo credit availability has improved in recent years, consistent with anecdotal evidence (see this February 2016 Wall Street Journal article, password required).” Has the wealth effect created by the stock market has something to do with this improvement? Also, a lot of the markets where jumbo mortgages are common, like New York City, Seattle, San Francisco, have experience increases in home values, so banks may not see these jumbo mortgages as very risky since there is an option to sell and recoup their money in case of default.