Just Released: Is Housing a Good Investment? Where You Stand Depends on Where You Sit -Liberty Street Economics The SCE Housing Survey, which has been fielded annually every February since 2014, is part of the broader Survey of Consumer Expectations. Results are presented in the Center for Microeconomic Data’s SCE Housing Survey interactive web feature, which presents time trends for variables of interest for the overall sample as well as for various demographic groups. As in previous years, we are also releasing a detailed background report that describes the sample and presents summary statistics for a larger number of questions.

We now focus on one of the questions we find particularly interesting—namely whether people think of housing as a good financial investment. The response to this question presumably reflects households’ views on the expected return and risk of housing, but also may incorporate their views on taxes and the required upkeep associated with owning housing, as well as alternative investment opportunities they might have to forego when buying a house.

As the chart below illustrates, a large majority of our respondents view housing in their zip code as a “somewhat good” or “very good” investment, relative to other possible financial investments. Furthermore, this share has steadily increased over the last five years: In 2014, only 56 percent of respondents viewed housing as a good investment; that number now stands at 65 percent. 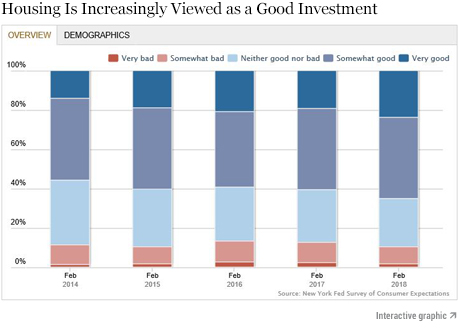 Although our respondents are very positive overall about housing, there are some interesting differences across regions of the country. This is illustrated in the next chart, which shows how the share of respondents who view housing as a good investment has evolved over time across the four main census regions. 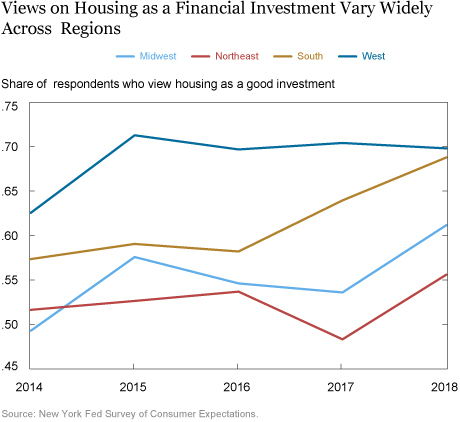 Households in the West are systematically the most bullish about housing, while those in the Northeast are least enthusiastic. This likely reflects differences in recent home price growth, which has been strongest in the West and weakest in the Northeast (although even there, price growth as measured by CoreLogic averaged a cumulative 19 percent over the last five years). Of course, it is also possible that households’ enthusiasm about housing as an investment—despite the negative experience from the 2007-12 drop in house prices—helped sustain the house price recovery post-crisis.

Finally, we take a look at whether perceptions about housing as an investment might be affected by the experience of natural disasters, which took a toll on various parts of the country last year. For this analysis, we classify a county as “disaster-affected” if mortgage servicers in the New York Fed Consumer Credit Panel reported that more than 10 percent of mortgages in a location were affected by a natural disaster at any point in 2017. This leaves us with sixty-three counties, most of which are in Florida, Texas and California. (Unfortunately, Puerto Rico is not a part of the SCE sample.)

We are interested whether the perceptions of housing as investment of respondents in these counties (roughly 100 per year) are different in 2018 compared with earlier years. The chart below shows that, perhaps surprisingly, more respondents in those areas view housing as a “good” investment than a year earlier (though slightly fewer consider it to be a “very good” investment). However, there is also a slight increase in respondents who state that housing in their area is a “bad” or “very bad” investment (7 percent in 2018 vs. 5.6 percent in 2017). Thus, overall the recent natural disasters do not seem to have dampened enthusiasm about housing, although views may have become more dispersed in response to this shock. 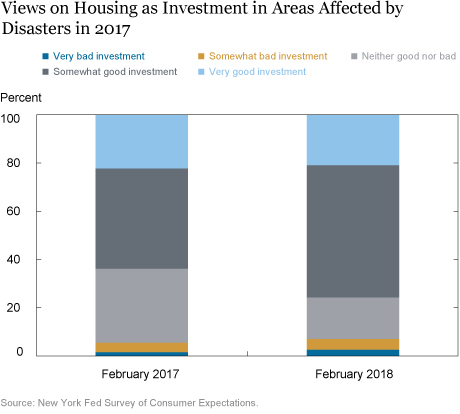 Conclusion
The 2018 SCE Housing Survey results mainly paint a picture of steady and perhaps even growing household optimism about the housing market. Although, as we have discussed here, there is some spatial variation in perceptions of housing as a financial investment. For more details, visit the Housing Survey home page, which offers a wealth of additional information.


How to cite this blog post:
Andreas Fuster, Andrew F. Haughwout, Nima Dahir, and Michael Neubauer, “Just Released: Is Housing a Good Investment? Where You Stand Depends on Where You Sit,” Federal Reserve Bank of New York Liberty Street Economics (blog), April 18, 2018, http://libertystreeteconomics.newyorkfed.org/2018/04/just-released-is-housing
-a-good-investment-where-you-stand-depends-on-where-you-sit.html.
Posted by Blog Author at 11:00:00 AM in Expectations, Housing