« Just Released: Are Employer-to-Employer Transitions Yielding Wage Growth? It Depends on the Worker’s Level of Education | Main | Regulatory Changes and the Cost of Capital for Banks »

The Effects of Post-Crisis Banking Reforms 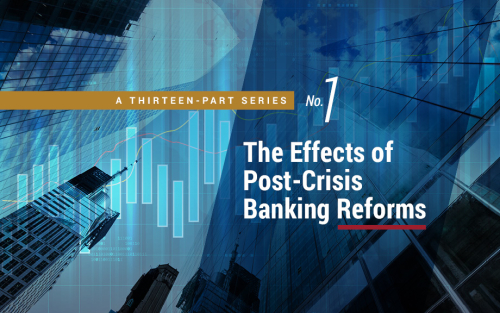 The financial crisis of 2007-08 exposed many limitations of the regulatory architecture of the U.S. financial system. In an attempt to mitigate these limitations, there has been a wave of regulatory reforms in the post-crisis period, especially in the banking sector. These include tighter bank capital and liquidity rules; new resolution procedures for failed banks; the creation of a stand-alone consumer protection agency; greater transparency in money market funds; and a move to central clearing of derivatives, among other measures. As these reforms have been finalized and implemented, a healthy debate has emerged in the policy and academic communities over the degree to which they have achieved their intended goals and the extent of any unintended consequences that might have arisen in the process.

In 2017, the New York Fed initiated a project to study the effects of these post-crisis reforms on bank performance and vulnerability. This project, completed in June 2018, consisted of twelve studies evaluating a wide set of regulatory changes, including the introduction of liquidity regulation, living wills, the supplemental leverage ratio, market value accounting to measure bank capital, and the Consumer Financial Protection Bureau, among other reforms. Each study was carefully designed to identify how these regulatory changes affected the risk-taking, funding costs, and profitability of banks, as well as liquidity levels in debt markets.

While understanding these effects is a critical first step in any attempt to evaluate post-crisis regulatory reforms of banks, it is important to acknowledge that these studies generally assess only some of the effects of new regulations. Further research is needed to assess the full spectrum of costs and benefits of the reforms.

Starting today, Liberty Street Economics will publish a series of posts, each summarizing one of the studies carried out under this project. Many of the findings align with theoretical predictions or with existing studies of the effects of post-crisis banking reforms, but they also unveil unexpected results and findings that run counter to the current academic and policy consensus. A prevailing theme from the twelve studies is that regulation is an important driver of the banking business. Put more succinctly: Banks respond actively and rapidly to changes in regulation. This highlights the importance of factoring in the expected reactions of banks when designing regulation.