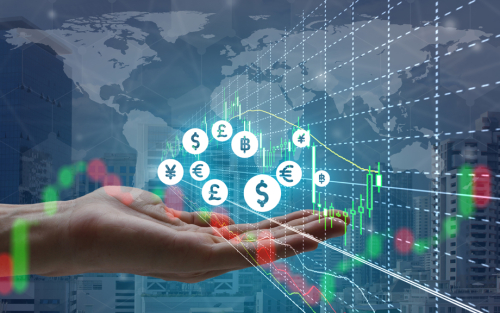 We consider a currency to be international based on its use in foreign countries as: a primary currency in official foreign exchange reserves; an anchor currency in exchange-rate regimes; a store of value and medium of exchange; and a unit of account, whether for transactions in foreign exchange and international capital markets, or for invoicing and settling in international trade. An assessment can also go beyond the traditional unit-of-account definitions and encompass the currency’s use in international clearing and settlements systems, financial markets infrastructure, and in reference rates in important financial contracts.

A Changing Environment
Major developments pertinent for the current international financial architecture include the introduction of the euro in 2000, China’s rising status in the global economy, and post financial crisis changes in the U.S. policy and financial environment. Various additional policy and operational developments have had and will have the potential to alter the desirability of using U.S. dollars.

After its introduction in 2000, the euro saw its status as an international currency deepen, peak around 2003, and decline in the aftermath of the global financial and euro-area crises amid slower growth in the euro area and uneven progress toward reaching a fuller financial and economic union. The euro’s international role remains close to historical lows, but it remains the second most important currency in the international monetary system. Its status could be enhanced with stronger economic growth, capital markets union, and a deeper and more liquid euro-area bond market. The euro-area economy is roughly comparable in size to that of the United States.

The international use of China’s currency has risen with the importance of China in global output, official investments to improve China’s institutions and governance, and deliberate promotional steps by the Chinese government. Such steps include establishing extensive networks of swap lines with foreign central banks, designating overseas renminbi (RMB) clearing banks, including in the United States, and rolling out a payments infrastructure for cross-border RMB payments. The “Belt and Road Initiative” along the Silk Road corridor dispersed large amounts of infrastructure investment funds globally, also paving the way for RMB expansion.

Developments in U.S. policy over the past decade supported the international role of the dollar. Crisis containment efforts during the global financial crisis—including enhancing the Federal Reserve’s lender-of-last-resort role around dollar funding (for example, through central bank swap lines) and shoring up bank resiliency under the Dodd Frank Act—supported the international use of dollars and the so-called safe-haven status of U.S. Treasuries. Countries outside of the U.S. central bank swap network have bolstered their dollar reserves to buffer against future dollar funding risks.

Potentially working against the international use of dollars are: a decline in correspondent banking, where banks seek out other banks to provide services on their behalf (occurring as banks de-risk); higher fiscal imbalances in the United States, to the extent that concerns rise about fiscal deficits and debt burden sustainability; and policy actions that could weaken international trade and financial ties.

FinTech developments can also have implications. Cryptocurrencies, set up to challenge the conventional structure of payments in official currencies, thus far are unlikely to meet criteria for international roles in the near to medium term. Widespread use of online retail platforms has not yet challenged dollar roles.

Status Check
By many measures, the dollar remains the dominant medium. Consider, for example, its status as a “reserve currency.” Global foreign exchange reserves totaled roughly $11 trillion at the end of 2017, with the dollar’s share at 63 percent, followed by a sizable portion in euros, then by significantly lower shares in yen, pounds, RMB, and other currencies (see the chart below). 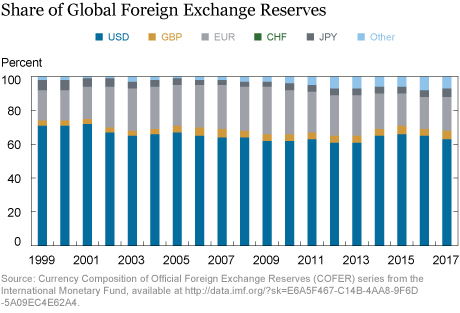 Since the global financial crisis, central banks have accumulated official reserves more extensively to self-insure against dollar-funding market disruptions. Indeed, many foreign investors and central banks are major holders of U.S. Treasuries, as these represent deep and liquid dollar investments. (See the next chart.) The dollar is the principal anchor currency for about 65 percent of countries with fixed or managed exchange rate arrangements. These countries account for approximately 75 percent of world output. 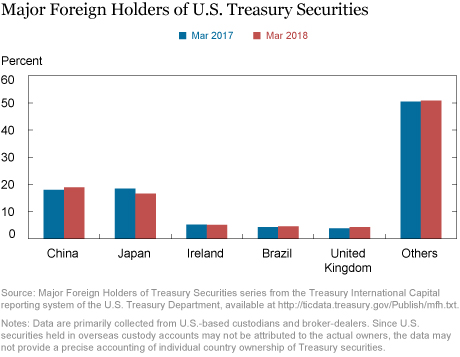 The dominant role of the dollar as a unit of exchange and as a transactions and settlement currency is illustrated by its continued broad use in 88 percent of foreign exchange transaction volumes and at least 40 percent of the invoicing of imports of countries other than the United States. Sixty-two percent of international debt securities issuance, 49 percent of all debt securities issuance, and 48 percent of all cross-border bank claims are dollar-based (see charts below). Roughly half of the $1.6 trillion of dollar banknotes in circulation are held overseas, fluctuating with economic and political uncertainty in foreign countries. In payments systems, roughly half of the $5 trillion of transactions settled daily through the CLS system are denominated in dollars, according to 2018:H1 data. 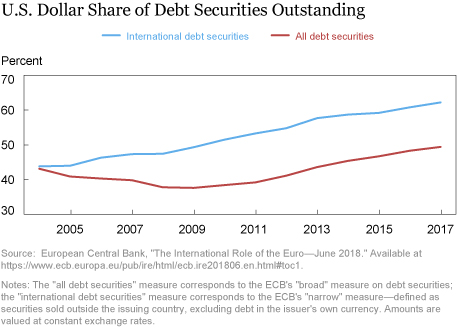 Developments have led to some changes to the dollar’s status, both positive and negative. For example: 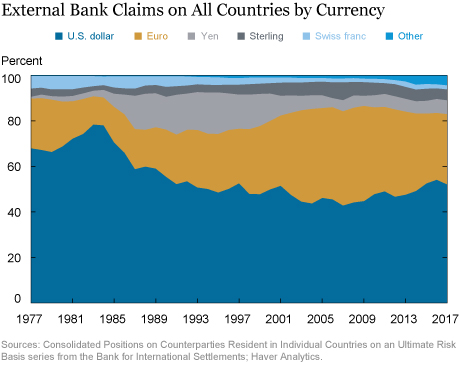 In sum, the period since the global financial crisis has not seen a widespread change in the international monetary architecture. While the dollar’s international status may have declined in some pockets, overall it remains dominant. Nevertheless, recent trends bear watching as history suggests that a currency’s dominant status is not immutable.

Robert Lerman is an assistant vice president in the Bank’s Markets Group.