Did Tax Reform Raise the Cost of Owning a Home? -Liberty Street Economics 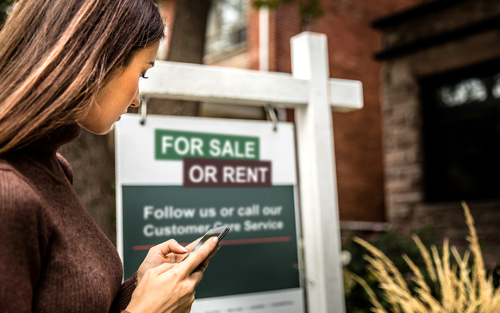 For taxpayers who itemize, the TCJA also limits the deductibility of state and local taxes (SALT) as well as mortgage interest. SALT deductions, previously uncapped, are now limited to $10,000, and the ceiling on mortgage interest deductions was lowered from $1 million to $750,000. These changes interact with a large reduction in the Alternative Minimum Tax in complex ways that make the effect of the law difficult to analyze.

Calculating the Price-to-Rent Ratio
To understand the way these tax changes affect the relationship between rents and prices, we adopt the standard user cost framework that reflects the opportunity costs of owning a home. From the user cost expression defined in the previous post, the price-to-rent (P/R) ratio is a measure of the (inverse) user cost.

To examine whether any effect of the TCJA is detectable in the data, we calculate P/R ratios using property-level data from the Multiple Listing Service (MLS); we obtain these data from CoreLogic. Our idea is to create unit-level price-to-rent ratios by estimating, for each owner-occupied unit that sold in a particular place in a particular year, what that same property would have rented for in that time and place. To do this, we start by using a “hedonic regression” to estimate the rental value of observable characteristics of the single-family rental stock, such as a property’s age, square footage, number of bedrooms/bathrooms, garage access, etc. We then use those estimates to predict what the recently sold owner-occupied stock would have rented for, given its observable characteristics. We perform this exercise only for owner-occupied units that are similar to the rental stock, and only for rental units that match some part of the owner-occupied quality distribution. There is a perhaps surprisingly high degree of overlap: We are able to find a matching owner-occupied home for almost all single-family rental properties, and a matching rental property for about 90 percent of owner-occupied homes.

We can then calculate a P/R ratio using the estimated rent and the close, or sale, price of the home. The advantages of our approach (in contrast with estimating P/R ratios using average prices and average rents) is that we control for quality and can examine detailed heterogeneity over space and units.

We are limited to the metro areas that CoreLogic’s MLS data cover, so our results are not necessarily nationally representative, being affected by changes in the composition of units that sell in a given period. Nonetheless, the MLS approximates the full universe of owner-occupied unit sales in the areas it covers, and we have large sample sizes, especially across MSAs in Texas, California, and Florida. The MLS also includes all newly rented properties that found a tenant through a real estate agent. Note, however, that properties not covered by the MLS data are most likely private rentals and sales made through a site such as Craigslist.

Converging Price-to-Rent Ratios
As noted in Monday’s post, many factors are currently putting upward pressure on housing user costs, and we would expect to see these factors reducing P/R ratios, especially in places where taxpayers were previously likely to itemize. When we add in IRS data that record the number of taxpayers that itemize in a zip code, we can break down our data into quartiles of itemization share (for example, identifying properties that are located in a zip code where the share of taxpayers who itemize is in the top 25 percent nationwide). When we do so, we see a decline in the median P/R ratios for properties located in areas that are likely to itemize relative to low-itemization areas. (In level terms, this change in relative prices stems from the ratios in high-itemization areas stabilizing while the ratios in low-itemization areas continue to rise.) The chart below shows that this narrowing of the differences in P/R ratios is most pronounced when we compare high-itemization areas to low-itemization areas (Q4-Q1) and is not very evident in the top half of the distribution (Q4-Q3). 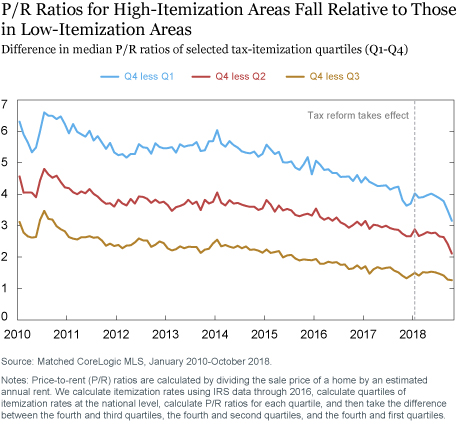 It is interesting to see what may be driving these trends. One possibility is the TCJA’s caps on SALT deductibility. In the next chart, we categorize states by tax regime, with high-tax states defined as the top ten in terms of total taxes collected per capita. We then compare the P/R ratios in high-itemization areas of high-tax states with those in low-tax states. (We use total taxes since the Tax Policy Center analysis indicates that the increase in the standard deduction will induce most of the reduction in itemized housing-related deductions, thereby increasing the user cost of housing and decreasing P/R ratios.) Our high-tax states include California, Connecticut, Massachusetts, Minnesota, New Jersey, and New York. The other high tax states—Vermont, Rhode Island, Maryland, Washington D.C., Illinois, and Oregon—are not represented in our MLS data.

As was evident in the first chart, P/R ratios are generally higher in high-tax, high-itemization areas, but that difference has been declining since April 2018. These results support the conclusion that the TCJA’s changes to the relative cost of state and local taxes are showing up in the relative pace of price appreciation across states. 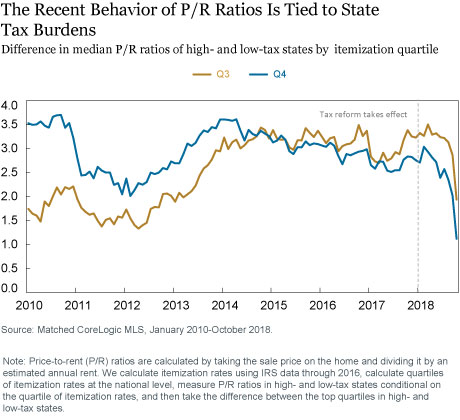 Despite declining differences in P/R ratios across space, we do not see large declines in the levels of P/R ratios anywhere—something we might have expected given the slowdown in the housing sector. Interestingly, widely followed repeat-sale measures of home prices, like the CoreLogic and FHFA Home Price Indexes, continued to rise through 2018 even as activity like sales and housing starts have fallen. The fact that P/R ratios are not yet declining much may be attributable to search frictions and selection of properties that actually sell when user costs are rising, consistent with the results in this recent paper by Anenberg and Kung. Indeed, while our method partially controls for unit quality, we still see a related form of selection in our data. There is substantial heterogeneity in P/R ratios and the share of properties in our sample from the highest P/R locations, especially in California, declined in the second half of 2018, consistent with the evidence presented in Monday’s post.

Overall, the country has seen a narrowing in P/R ratios between high- and low-tax states since the tax changes that started taking effect at the beginning of 2018. In level terms, the ratios in high-tax, high-itemization areas have stopped moving higher while the ratios in the rest of the country have continued to rise. We will continue to monitor these trends in P/R ratios for further insight into housing market dynamics during 2019.


Sonia Gilbukh is an assistant professor of real estate at Baruch College.

Rebecca Landau is a senior research analyst in the Bank’s Research and Statistics Group.