Did Changes in Economic Expectations Foreshadow Swings in the 2018 Elections? 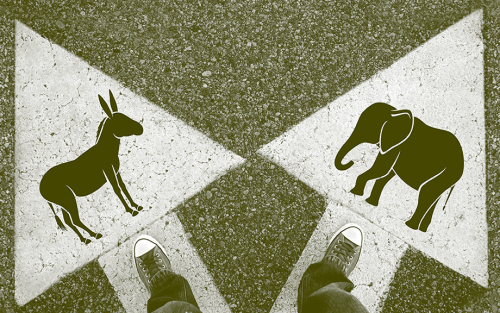 In all charts in this post, we split the survey respondents based on the party of the Representative elected in their congressional district. Specifically, we divide respondents into three groups: those represented by a Republican after both the 2016 and 2018 elections (henceforth “GOP‑GOP districts”), those represented by a Republican after the 2016 election and a Democrat after the 2018 election (“GOP-Dem districts”), and those represented by a Democrat after both the 2016 and 2018 elections (“Dem-Dem districts”). We do not have enough observations in the districts that flipped from Democratic to Republican control in 2018 to include these respondents as a separate group, and have dropped them from our analysis. We also exclude respondents from North Carolina’s 9th congressional district, where a new election will be held. In all charts, we indicate with vertical lines the timing of the 2016 election and the 2018 midterm election.

We begin by examining respondents’ assessments of their household financial situation. The left panel of the chart below shows the percentage of respondents who say they expect to be better off financially a year from now, while the right panel shows the percentage who report that they are better off financially now than a year ago. After the 2016 election, respondents who lived in GOP-GOP districts (shown in red) became dramatically more optimistic about their expected future personal financial situation. After some months, polarization between GOP-GOP and Dem-Dem districts (shown in blue) decreased, as pointed out in our previous post (where we split counties by 2016 presidential election outcomes). We also see an increase in optimism in GOP-Dem districts (in purple), but it is much smaller. While respondents in GOP-GOP districts and in GOP-Dem districts had the same level of forward-looking financial optimism in November 2016, a gap in their expectations had opened up by early 2017 and remained relatively wide through 2017 and 2018. 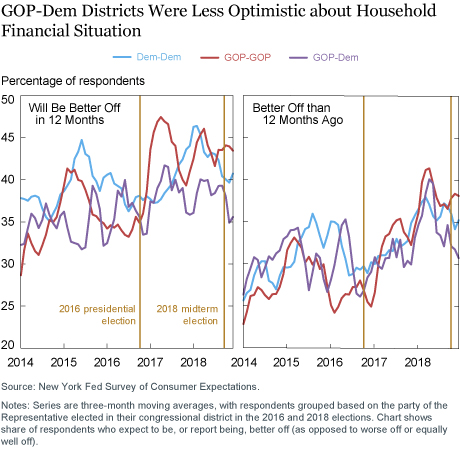 This pattern is consistent with respondents’ evaluation of their current financial situation relative to a year prior, shown in the right panel above, where a gap in expectations between GOP-GOP and GOP-Dem districts formed in early 2018. Notably, by the 2018 midterm elections, respondents in GOP-Dem districts were the least likely to believe they would be financially better off in a year and also the least likely to believe they were financially better off than one year before, even compared to respondents from Dem-Dem districts.

Next, we examine respondents’ expectations about the overall U.S. economy. The chart below shows the average perceived likelihood that U.S. stock prices (left panel) and unemployment (right panel) will be higher one year later. In the years before the 2016 election, GOP-GOP districts were consistently more pessimistic than Dem-Dem districts about the stock market, with GOP-Dem districts somewhat in between. Following a large increase in optimism in all three groups after the 2016 election, expectations about stock prices declined, nearly in parallel, for both GOP-GOP and Dem-Dem districts. Interestingly, though, stock market expectations decreased more in GOP-Dem districts than in the other two groups between summer 2017 and summer 2018. A small increase in optimism before the midterm elections returned the GOP-Dem districts to the same level as the other two groups. 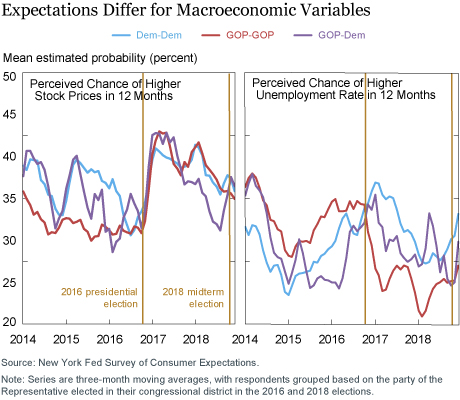 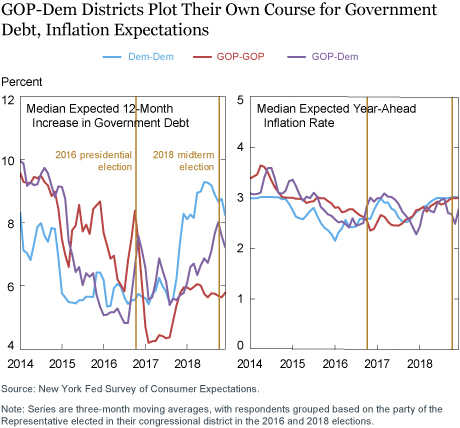