How Has Germany’s Economy Been Affected by the Recent Surge in Immigration? -Liberty Street Economics

How Has Germany’s Economy Been Affected by the Recent Surge in Immigration? 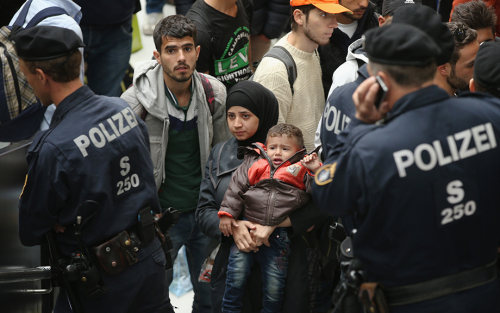 Germany emerged as a leading destination for immigration around 2011, as the country’s labor market improved while unemployment climbed elsewhere in the European Union. A second wave began in 2015, with refugees from the Middle East adding to already heavy inflows from Eastern Europe. The demographic consequences of the surge in immigration include a renewed rise in Germany’s population and the stabilization of the country’s median age. The macroeconomic consequences are hard to measure but look promising, since per capita income growth has held up and unemployment has declined. Data on labor-market outcomes specific to immigrants are similarly favorable through 2015, but reveal challenges in how well the economy is adjusting to the second immigration wave.

The Two Waves
Germany’s foreign population—that is, residents who are not citizens—rose during the early 1990s, but there was essentially no net increase from 1995 through 2010 (see chart below). Indeed, the 2011 census found more than 1 million fewer foreigners than had been estimated. The net data hide periods when there were significant gross flows in and out of the country: A typical year would see more than half a million foreigners take up residence in Germany and more than half a million leave the country. 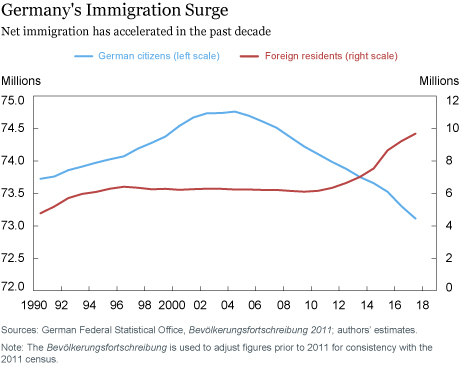 A wave of net immigration then took hold, with the number of foreigners residing in Germany rising by 1.4 million from 2011 to 2014. The data show that countries in Eastern Europe (particularly relatively recent EU members such as Poland and Romania) accounted for over half of this inflow, with the rest coming roughly equally from Western Europe, the Middle East, and the rest of the world.

A second wave of immigrants started in 2015, with a large inflow from Syria and other countries in the Middle East. All told, Germany’s foreign population rose by 2.1 million during 2015-17, with about 45 percent of this number coming from the Middle East, about 35 percent from Eastern Europe, and the rest from other countries.

The motives behind the two waves differ. Inflows from Eastern Europe have likely been driven largely by economic considerations, with immigrants drawn to the opportunities provided by Germany’s tight labor market. Recent immigration from the Middle East has been largely to seek refuge from civil conflict, especially given Germany’s relatively liberal (though recently tightened) asylum policies. According to OECD data, Germany received 1.4 million official asylum requests during 2015-17, roughly twice the combined number in France, Italy, and the United Kingdom. This second wave began to subside in 2017 and appears to have eased further last year.

The surge in immigration has had a material impact on Germany’s demographic profile. The country’s total population began rising again in 2012 despite an ongoing decline in the number of German citizens. (The top chart somewhat understates the contribution of immigration to the turn-around, since roughly 100,000 foreign residents have gained German citizenship each year.) By the end of last year, Germany had added a net total of 2.7 million residents. The working-age (20-64) cohort’s share of the total population, while still in decline, has been falling at a much slower pace relative to the previous decade because of the immigration inflow. According to European Commission data, 35 percent of immigrants since 2012, on a net basis, have been 19 or younger, with another 45 percent aged 20-34. Fewer than 5 percent have been over 50. Similarly, Germany's median age has remained roughly stable since 2012 after steep increases in the previous two decades.

Macroeconomic Performance
The macro data imply that the economy has absorbed many of the new arrivals into the workforce. Germany’s unemployment rate has been declining since 2010, a trend uninterrupted by the heavy inflow. Similarly, there has been improvement in the employment-to-population ratio over the period. To be sure, there was only a small increase in this ratio in 2015, the year with the heaviest inflows, but it then returned to its marked upward trend.

Germany’s labor market is very tight, with the unemployment rate now more than 4 percentage points below the weighted average for the rest of the EU-28. The employment-population ratio for the 20-64 age group is about 8 percentage points above the EU average. This robust labor-market performance has likely acted as a powerful magnet for immigration.

GDP growth was well balanced during both the first and second immigration waves, with private consumption growing somewhat more slowly than overall GDP and fixed-investment spending expanding somewhat more rapidly. Of note, residential construction was the strongest element of domestic demand during both periods, a development likely fueled by the country’s return to positive population growth in 2012.

Labor-Market Outcomes for Immigrants
Evidence on labor-market outcomes indicates that the immigrant population has benefited from Germany’s tight labor market. The European Union conducts an annual labor-force survey, collecting data on participation, employment, and unemployment for various demographic categories, including immigrant and native-born populations by age group. (The data set here differs from that used in the above chart by using foreign-born instead of non-citizen to define the foreign population. A little over 20 percent of Germany’s foreign-born population has gained citizenship.) From 2007 to 2017, the employment rate among Germany’s foreign-born population aged 20-64 rose by 8 percentage points, going from 62 to 70 percent. This is a somewhat larger increase than that achieved by the native-born population. Even so, immigrants remain less likely to be employed than natives, with more than 80 percent of this population having a job.

The labor-force survey also tracks outcomes for newly arrived immigrants, those with five or fewer years of residence. These data point to challenges in adjusting to the latest immigration wave. From 2007 to 2015, the employment rate for recent immigrants rose from 50 percent to 60 percent, a larger increase than those experienced by natives and all immigrants. The employment rate then fell back to 53 percent by 2017, pointing to underperformance by the most recent immigrants in gaining employment. 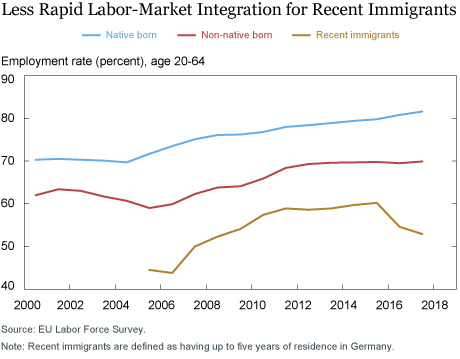 The German experience of a tight labor market having very strong benefits for integrating foreign workers into the labor force does not appear to be unusual. That is, employment gains by immigrants seem systematically related to gains by the native-born populations. In the chart below, a simple regression of EU countries, plus Switzerland and Iceland, shows that a 1.0-percentage-point gain in the native employment rates from 2007 to 2017 is typically associated with a 1.3-percentage-point gain in the employment rate for foreign workers. Germany’s experience falls almost directly on the estimated regression line and there are no large outliers among the thirty countries in the sample. 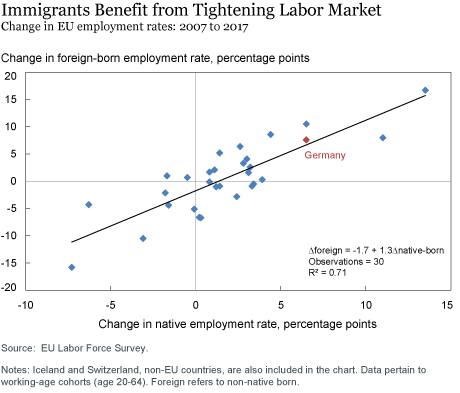 Conclusion
The German economy appears to have successfully adjusted to a dramatic increase in immigration since 2010. While the inflow of refugees has now slowed considerably, the country’s low unemployment rate suggests Germany will continue to be a magnet for foreign labor, with the benefit of moderating the aging of its workforce.


How to cite this blog post:
Matthew Higgins and Thomas Klitgaard, “How Has Germany’s Economy Been Affected by the Recent Surge in Immigration?,” Federal Reserve Bank of New York Liberty Street Economics (blog), May 20, 2019, https://libertystreeteconomics.newyorkfed.org/2019/05/how-has-germanys-economy-been-affected-by-the-recent-surge-in-immigration.html.
Posted by Blog Author at 07:00:00 AM in Employment, International Economics, Labor Market, Macroecon, Unemployment

Germany has practiced severe age-discrimination in the recent past, openly posting age-requirements (e.g. "under 35") in job solicitations.

Thanks you for your question. The immigration data include those from German enclaves in Eastern Europe.

Does this information reflect refugees or immigrants from East Europe who were from ethnic German enclaves in their country of origin?