« From the Vault: A Look Back at the October 15, 2014, Flash Rally | Main | Optimists and Pessimists in the Housing Market »

Does U.S. Health Inequality Reflect Income Inequality—or Something Else? 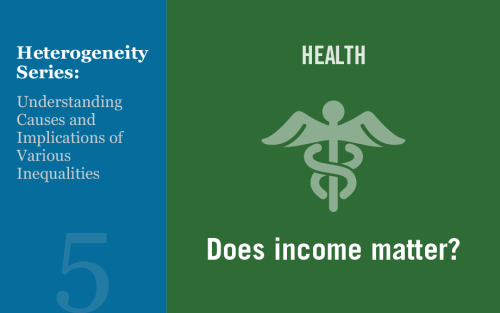 Health is an integral part of well-being. The United Nations Human Development Index uses life expectancy (together with GDP per capita and literacy) as one of three key indicators of human welfare across the world. In this post, I discuss the state of life expectancy inequality in the United States and examine some of the underlying factors in its evolution over the past several decades. 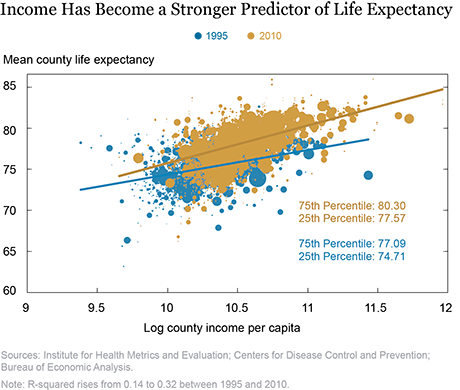 Looking at the chart, one may be tempted to conclude that the correlation it plots is causal –having a high income is now more important to accessing quality medical care, which in turn prolongs life. However, the story is more complicated. In a landmark 2016 paper in the Journal of the American Medical Association, Raj Chetty and his coauthors investigate the correlates of the life expectancy of the poor across U.S. commuting zones. They find that the biggest determinants of life expectancy among low-income individuals are behavioral variables, such as smoking, obesity, and exercise rates. Surprisingly, measures of access to health care, such as the fraction of poor people who have insurance, or the provision of preventive care, are not correlated with the life expectancy of the poor, and neither are measures of a county’s economic health, such as its unemployment rate.

An even starker illustration of the limits of health care goods as a means to a higher life expectancy comes from recent work by Chen, Persson, and Polyakova (2019), who investigate the mortality-to-income gradient in Sweden. Unlike the United States, Sweden has universal health insurance, guaranteeing access to a baseline level of health care services to everyone regardless of their income. However, Chen et al. (2019) show that although Swedish mortality (the probability of dying in the next year at age 59) is lower than U.S. mortality for both the rich and the poor, the slopes of the two gradients are similar. That is, moving up an extra percentile in the Swedish income distribution would yield a very similar mortality reduction as moving up a percentile in the U.S. income distribution. This suggests that access to care is not the issue, since Swedes’ access is generally unrelated to their incomes.

I conclude by showing that the strengthening of the relationship between county life expectancy and county income in the United States can be statistically explained by a third variable: the smoking rate. To do this, I use data on U.S. smoking prevalence by county from 1995 to 2010 from IHME. (This dataset runs from 1996 to 2012; I use the 1996 numbers for 1995 to match up with the county income dataset). The next chart shows that the relationship between smoking prevalence and income across U.S. counties has become stronger over time, mirroring the relationship between life expectancy and income. Not only did the smoking rate in the United States decline, on average, over these fifteen years, but it declined much more in high-income places than in low-income places. 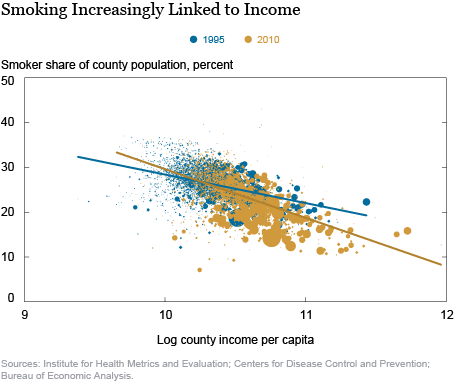 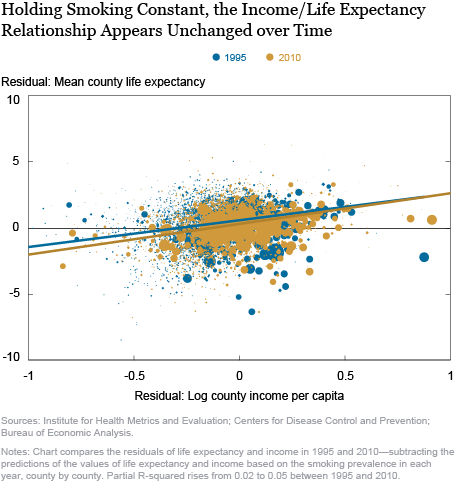 While income now appears to be more salient to health outcomes than it has been in a generation, paradoxically, redistributing income and the health resources that it buys does not seem sufficient to improve health outcomes for individuals in the bottom of the life expectancy distribution. Instead, a more promising approach might center on reducing adverse health behaviors that used to be widespread but are now increasingly concentrated among the poor. Figuring out how to do this will be the key to reducing health inequality.