« Since the Financial Crisis, Aggregate Payments Have Co-moved with Aggregate Reserves. Why? | Main | At the New York Fed: Fifth Annual Conference on the U.S. Treasury Market » 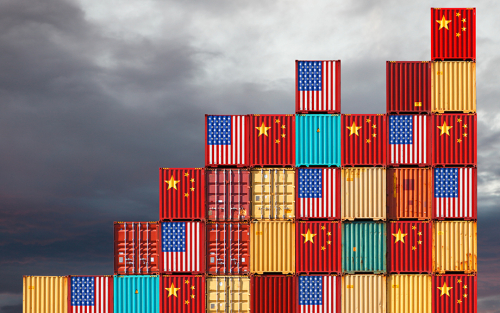 Global trade policy uncertainty has increased significantly, largely because of a changing tariff regime between the United States and China. In this blog post, we argue that trade policy can have a significant effect on firms’ organization of supply chains. When the probability of a trade war rises, firms become less likely to form long-term, just-in-time relationships with foreign suppliers, which may lead to higher costs and welfare losses for consumers. Our research shows that even in the absence of actual tariff changes, an increased likelihood of a trade war can significantly distort U.S. imports.

In a recent study, we examine how firms set up and operate their international supply chains, building on a theory of “optimal procurement” previously applied to firms’ domestic operations. In our framework, a U.S. firm chooses between two systems to import inputs at the lowest overall cost, while ensuring that suppliers provide high-quality inputs. Under the “inspection” system, the U.S. firm buys imported inputs from the lowest-priced foreign supplier, and then incurs additional costs to inspect each shipment for quality. Under the “relationship” system, a firm enters into a long-term relationship with a foreign supplier and, instead of inspections, incentivizes the supplier to provide high-quality inputs by paying a premium over the supplier’s costs. The foreign supplier values the relationship because of this premium. The U.S. sourcing firm prefers the relationship system if the premium it pays to incentivize the supplier is less than the inspection cost.

The choice between these two systems depends on the cost of inspections relative to the premium paid to suppliers in a long-term relationship. This comparison highlights channels through which trade policy uncertainty can affect a firm’s supply chain decisions.

Consider the case of a foreign firm supplying inputs to a U.S. firm under the terms of an established relationship. If trade policy is certain, the foreign supplier believes the relationship can be long-lasting, and requires only a small premium over its costs to continue to supply high-quality inputs. If trade policy becomes uncertain, however, so that a trade war may end the relationship in the near future, the foreign supplier will require a higher premium to provide high-quality inputs. In this case, the U.S. firm may not engage in long-term relationships with its suppliers—forgoing the benefits associated with the relationship system—and instead opt for procuring goods via the inspection system.

Applying this framework to detailed, transaction-level U.S. import data, we are able to able to examine the implications of a past shock to U.S. trade policy uncertainty for U.S. firms’ sourcing decisions.

Each procurement system has characteristics that can be observed in U.S. trade data. Due to the fixed cost of inspection, the inspections system is associated with relatively infrequent and large orders, as importers try to reap economies of scale. Importers under the inspections system also switch suppliers frequently, since there is no incentive to maintain a specific relationship, and they pay the lowest possible price. The relationship system, on the other hand, is associated with small shipment sizes and frequent orders to provide optimal incentives (consistent with “just-in-time” procurement). Furthermore, prices are higher due to the incentive premium.

We observe firms engaging in both types of procurement systems using confidential import data from more than 130 million customs records since 1992 that cover the universe of U.S. imports. Our analysis focuses on arm’s-length transactions and therefore does not consider imports from affiliates of multinational corporations. Consistent with our framework, we find that U.S. importers that source the same 10-digit Harmonized System (HS10) product from many different arm’s-length suppliers in a given year tend to have short relationships with each of these suppliers and receive infrequent, lumpy orders at relatively low prices. On the other hand, firms that have few suppliers for a given product tend to have long relationships with each one and receive frequent, small orders at higher prices, consistent with the long-term relationship-based system. Inspection-based procurement is more likely for commoditized products, such as raw materials, while long-term relationship-based procurement is more often used when the product is differentiated. 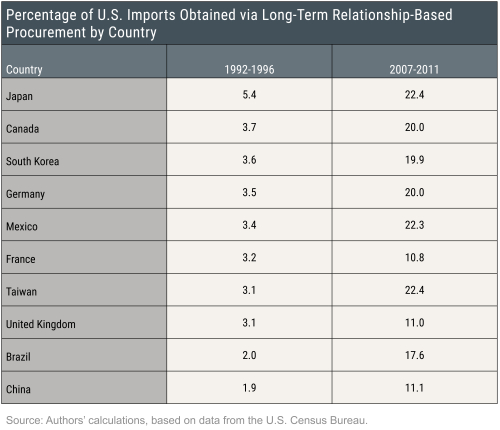 The Role of Trade Policy Uncertainty in Firms’ Procurement Decisions

As discussed above, if the probability of a trade war rises, firms must pay their suppliers higher premiums to incentivize them to provide high-quality inputs, which makes the relationship system less attractive. Therefore, when firms believe that a trade war is likely, they shift away from long-term, just-in-time relationships and move toward inspection-based procurement.

We test this prediction by studying an earlier episode during which a trade war became less likely, building on prior work, since comprehensive data for the most recent episode are not yet available.

In October 2000, the United States extended Permanent Normal Trade Relations (PNTR) status to China. Prior to that date, U.S. imports from China were in principle subject to relatively high tariff rates originally set under the Smoot-Hawley Tariff Act of 1930, rather than the lower tariff rates reserved for trading partners that are members of the World Trade Organization (WTO). A provision of U.S. trade law, however, allows imports from non-WTO economies to enter the United States under WTO-level tariffs subject to annual approval by both the president and Congress. Chinese imports first began entering the United States under this provision in 1980, after the warming of relations between the United States and China. Annual approval became controversial and less certain after the Tiananmen Square incident in 1989, however, and this uncertainty continued throughout the 1990s. The uncertainty ended in 2000, when PNTR eliminated the need for these annual renewals. After China entered the WTO in 2001, future increases in tariffs on a wide range of Chinese exports were seen as unlikely. Since these policy changes did not affect the actual tariff levels (which remained at the WTO level since 1980, since the provision was always renewed prior to 2000), the episode provides an ideal experiment to analyze the impact of the threat of higher tariffs on firms’ supply chains.

The chart below presents the import share of relationship-based procurement between the United States and China in four time periods relative to the period 1997-2001, which we normalize to one. Since China’s entry into the WTO led to the formation of many new trial relationships, we focus here only on importer-supplier connections that were already in existence in 1997-2001. The chart highlights that within this set of pre-existing connections, the share of relationship-based imports from China increased by a factor of five after the enactment of PNTR. While relationship-based sourcing from the rest of the world also increased, it only rose by a factor of about three. 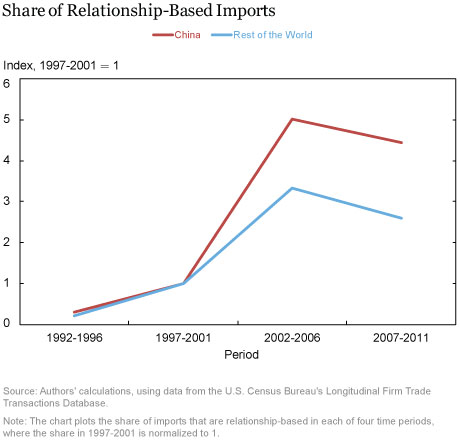 To test whether PNTR caused a shift from inspection-based to relationship-based procurement, we exploit the fact that different products had been subject to different magnitudes of potential tariff increases before PNTR. Specifically, we calculate an “NTR” gap that is equal to the difference between the WTO and Smoot-Hawley tariff rates. The size of the NTR gap varies significantly across HS codes. The mean of the NTR gaps across 8-digit Harmonized System codes in 1999, just before PNTR, is 32 percentage points, with a standard deviation of 23 percentage points across products.

If the fear of a trade war prevented firms from forming relationships, then the shift from inspection-based to relationship-based procurement due to the end of the annual renewal process in 2000 should be more pronounced for products with larger NTR gaps. Our analysis confirms this prediction. For a given total import volume, orders became relatively smaller and more frequent for high-NTR-gap products from China after the enactment of PNTR. Furthermore, the relative price and relationship length for high-NTR-gap products rose significantly. These changes are consistent with a shift towards relationship-based, just-in-time procurement that was most pronounced for high NTR gap products. Despite the relative increase in prices under the long-term relationship-based system, total procurement costs fall due to the elimination of inspection costs, leading to welfare gains for consumers.

Our findings suggest that an increase in the probability of a trade war could reverse this pattern and lead to a shift back from just-in-time procurement toward the inspection-based system. Such a shift would increase U.S. firms’ procurement costs, raise consumer prices, and lower welfare.

Justin R. Pierce is a principal economist at the Board of Governors of the Federal Reserve System.

Georg Schaur is a professor at the University of Tennessee’s Haslam College of Business.

Peter K. Schott is a professor of international economics at the Yale School of Management.