At the New York Fed: Fifth Annual Conference on the U.S. Treasury Market 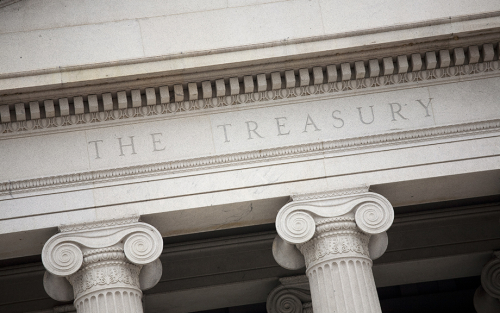 The New York Fed recently hosted the fifth annual Conference on the U.S. Treasury Market. The one-day event was co-sponsored with the U.S. Department of the Treasury, the Federal Reserve Board, the U.S. Securities and Exchange Commission (SEC), and the U.S. Commodity Futures Trading Commission (CFTC). This year’s agenda featured a series of keynote addresses and expert panels focused on a variety of topics, including issues related to the LIBOR transition, data transparency and reporting requirements, and market structure and risk.

New York Fed President John Williams began the day’s discussions with introductory remarks, focusing primarily on the needed transition away from using LIBOR rates in financial contracts. He noted the urgency and seriousness of the issue while also acknowledging the progress that has been made in managing this transition. He emphasized that the implementation of the transition will be complex and that the private and public sectors have a collective responsibility to ensure a smooth transition. Following President Williams’ remarks, the Treasury department led a panel on the potential for Treasury to issue a floating-rate note linked to the Secured Overnight Funding Rate (SOFR), touching on sources of demand, potential pricing, the structure of a SOFR-linked note, and the experience of investors and issuers in the rapidly developing SOFR-linked market.

The conference proceeded with a presentation from Deputy Secretary of the Treasury Justin Muzinich. Mr. Muzinich discussed the Treasury market TRACE data, including the benefits from releasing aggregated transaction data to the public, and presented Treasury’s recommendation for the Financial Industry Regulatory Authority (FINRA) to release weekly statistics on Treasury volumes tabulated from the data. He went on to discuss some insights from the new reporting of principal trading firm (PTF) activity by alternative trading systems (ATS). Mr. Muzinich showed that, while PTFs make up approximately 20 percent of overall market trading volume, they are more dominant in the electronic interdealer broker market, where they make up 60 percent of trading volume.

Securities Exchange Commissioner Elad Roisman delivered the other keynote address at the conference, making his remarks by video. Mr. Roisman discussed the role of ATSs in the Treasury market and asked whether the existing regulatory framework had kept pace with changes in the marketplace. He discussed the history of ATS regulation, which currently exempts venues that limit their activity to government securities, and raised the question of whether the SEC should apply Regulation ATS to U.S. Treasury venues, noting that applying the regulation could result in improved reporting transparency and operational resiliency. Mr. Roisman also suggested that the SEC consider revisiting the scope of the Systems Compliance and Integrity regulation, from which Treasury venues are currently exempt.

During the lunch session, newly appointed CFTC chairman Heath Tarbert was interviewed by Lorie Logan, a senior vice president in the New York Fed’s Markets Group and manager pro tem of the System Open Market Account (SOMA) for the Federal Open Market Committee (FOMC). Mr. Tarbert retraced his career up to his current role, covering his time at the Treasury Department and the White House during the financial crisis. He also discussed the evolution of the CFTC’s role as a regulator of derivatives markets, including of swaps and the Treasury futures market. Lastly, Mr. Tarbert addressed some topics on the CFTC’s current agenda, including integration of exchanges across market segments and managing risks from increased automation of trading in the Treasury futures and interest rate swaps market.

The final two panels of the day concerned recent developments related to Treasury market structure and risk management. The market structure panel focused on recent major acquisitions activity in the interdealer market as well as the impact of further automation and electronification. The panelists also discussed lessons learned from structural transitions in other markets, such as equities and foreign exchange. The risk panel covered various risks in the Treasury market as well as recent developments in risk management practices. Other topics discussed included market liquidity dynamics, cybersecurity and technology reliance, and select operational risks.

Justin Meyer is a policy and market analysis manager in the Bank’s Markets Group.