The New York Fed’s Center for Microeconomic Data today released the Quarterly Report on Household Debt and Credit for the fourth quarter of 2019. Total household debt balances grew by $193 billion in the fourth quarter, marking a $601 billion increase in household debt balances in 2019, the largest annual gain since 2007. The main driver was a $433 billion annual upswing in mortgage balances, also the largest since 2007. Auto loan and credit card balances both increased by a brisk $57 billion last year, while student loan balances climbed by a more muted $51 billion, well below the $114 billion increase recorded in 2013—the fastest pace of growth for the series. The source for the Quarterly Report is the New York Fed’s Consumer Credit Panel—a panel data set that now spans twenty-one years, 1999-2019. The unique panel design allows us to identify new entrants to the credit market: as young people age into having credit reports and using credit products, they are “born” into the panel, enabling us to observe the credit behavior of young borrowers.

Credit cards are the most commonly used type of consumer credit—more than 60 percent of people with a credit report have at least one credit card account. Generally speaking, all types of credit are less common among those in their 20s, since they are still working to build their credit histories. But credit cards are prevalent among younger borrowers as well, with over half of individuals in their 20s showing a credit card on their credit report.

We next consider the “births” of new borrowers in the panel—that is, the appearance of new credit reports with active accounts. While credit reports are not permitted for minors, they may legally be available for inquiry upon their eighteenth birthday—particularly if they already have some types of debts. When we consider borrowers that have a credit report by age 30, the average age at establishment of their first credit report has been between 21 and 22, a fairly steady pattern during the span of our data.

Given the prevalence of credit cards, it is perhaps not surprising that credit cards are now the most common way for young adults to dip their toes into credit use. Notably, this has not been the case through the two decades for which we have data. The chart below shows the percentage of first-time borrowers by type of first account opened, which has fluctuated with the credit cycle. In the early 2000s, about half of new borrowers opened credit card accounts as their first credit experience. Retail and other types of debt, shown here in light blue, were the second most prevalent types of first credit (in this case, these are predominantly new retail cards, such as a department store card; also includes other types of consumer debt such as an installment loan to finance a computer purchase). About a fifth of new borrowers’ credit reports show the presence of a student loan in 2004-05 as first account. Auto loans trailed. This changes notably, though, between 2010 and 2013, when student loans surpass credit cards as the most typical first credit experience. In 2010-11, only 34 percent of new borrowers started out with a credit card account, surpassed by 42 percent of new young borrowers with student loans. These shifts coincide with the Card Act of 2009, which placed limitations on the issuance of cards to very young borrowers, as well as a historic uptick in both college enrollment and student loan borrowing. In fact, credit card participation declined across the board during that time, as we observed in our May 2019 post on this topic. Unsurprisingly, mortgage debt is hardly ever the point of entry for newcomers to the credit market.

Auto loans have gradually increased in prevalence as a first-time debt, and have recently overtaken the “other” category, which has been slowly declining as retail card usage recedes from the levels seen in the early 2000s. 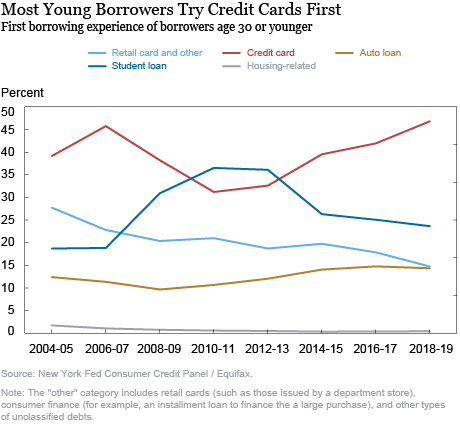 To gauge whether first-time credit experiences differ across income groups, we divide borrowers into income quintiles based on the average income in the zip code reported on their credit reports. Credit cards are the most common for new borrowers, but their prevalence is roughly correlated with income. About 56 percent of new borrowers from the wealthiest zip codes start with a credit card, contrasted by only 44 percent from those in the lowest income quintile. In contrast, retail cards and other types of loans are much more popular as a first account type for those in lower-income zip codes (19 percent for those in the lowest quintile versus 6 percent for those in the highest quintile). The likelihood of a young borrower’s first form of debt being a student loan also increases with income. But auto loans show a different pattern—19.8 percent of young borrowers from the second income quintile begin with an auto loan, compared to only 9.6 percent of those from the highest income zip codes. Housing-related debts are extremely uncommon as a first loan for young people across the board, and are not shown. 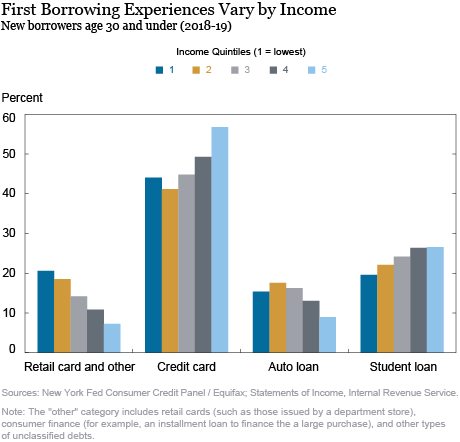 These early credit experiences reflect broader economic, societal, and policy trends. The weak labor market in the Great Recession was partly responsible for an increase in college attendance that, when combined with the Card Act, reduced the importance of credit cards relative to student loans. These credit experiences may also have lasting impacts on young borrowers. Our research has demonstrated the effects of student debt balances on the transition to homeownership, but even putting homeownership aside, a clean early repayment history can help ensure lifelong access to credit. Still, younger borrowers, who are disproportionately likely to have credit cards and student loans as their primary form of debt, struggle more than others with on-time repayment. About 4.3 percent of balances held by 18-29 year olds became delinquent in 2019, compared to only 2.8 percent of those held by 30-39 year olds. Since access to credit remains critical for smoothing consumption through periods of uneven income, financing large purchases, and making the transition into homeownership, we will continue to monitor shifts in the credit behaviors of young borrowers.

Posted by Blog Author at 11:04:53 AM in Credit, Household Finance