Women Have Been Hit Hard by the Loss of Routine Jobs, Too -Liberty Street Economics

« Introduction to Heterogeneity Series II: Labor Market Outcomes | Main | Is the Tide Lifting All Boats? A Closer Look at the Earnings Growth Experiences of U.S. Workers »

Women Have Been Hit Hard by the Loss of Routine Jobs, Too 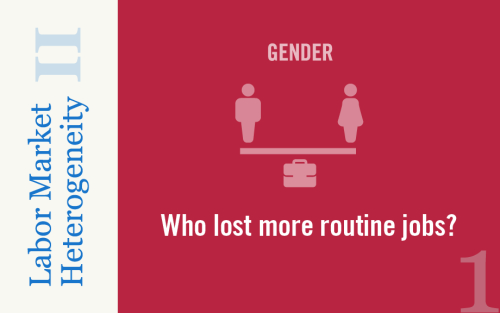 Technological change and globalization have caused a massive transformation in the U.S. economy. While creating new opportunities for many workers, these forces have eliminated millions of good-paying jobs, particularly routine jobs in the manufacturing sector. Indeed, a great deal of attention has focused on the consequences of the loss of blue-collar production jobs for prime‑age men. What is often overlooked, however, is that women have also been hit hard by the loss of routine jobs, particularly administrative support jobs—a type of routine work that has historically been largely performed by women. In this post, we show that the combined loss of production and administrative support jobs since 2000 is actually more than three times as large for prime-age women than prime-age men.

Routine Jobs Disappearing
Jobs that involve procedural or rule-based tasks—such as working on an assembly line in a factory—are commonly referred to as routine jobs. These kinds of jobs were once seen as a pathway to the middle class. However, precisely because of the nature of these jobs, they have been hit particularly hard by automation and outsourcing over the past several decades. While the loss of routine manufacturing jobs gets most of the attention, there are actually two broad categories of routine jobs: routine manual and routine cognitive. The first group tends to emphasize physical skills such as working on an assembly line, and are disproportionately held by men. Many such jobs have been displaced by less expensive labor overseas or robots. By contrast, routine cognitive jobs tend to involve mental tasks such as organizing information and basic number crunching, and include work historically performed by secretaries, bookkeepers, and clerks—most often held by women. Many of these kinds of routine jobs have been replaced by computers.

Our analysis focuses on production jobs and administrative support jobs—by far, the largest categories of routine jobs. While production jobs are concentrated in the manufacturing sector, administrative support jobs are spread across many industries. We examine employment trends in these two occupation categories over the past several decades separately for prime-age men and prime-age women (those between the ages of 25 and 54), plotted below.

Production jobs among prime-age men, represented by the red line, fell from 6.4 million in 1970 to under 4 million by 2019, a decline of more than 35 percent. While this occupation category employs fewer women than men, the pace of decline for prime-age women was even steeper, falling from a peak of around 3.2 million in the late 1980s to 1.6 million in 2019, a 50 percent decline. Administrative support jobs, while growing slightly for prime-age men in recent decades, declined substantially for women. These jobs used to employ more than 10 million women in the 1990s and early 2000s, but now employ around 7.5 million, a decline of more than 25 percent. Looking at these two types of jobs combined, between 2000 and 2019, about one million jobs were lost among prime‑age men, compared with a decline of 3.5 million jobs among prime‑age women.

These declines have had profound consequences for the types of job opportunities available for men and women alike, as shown in the chart below. Over 20 percent of prime‑age men used to be employed in production jobs, but now these jobs employ just 7 percent; among prime‑age women, the share declined from 17 percent to just 3 percent. The share of prime-age women working in administrative support jobs declined from over 30 percent to just 16 percent over the past several decades, while the share among prime-age men held fairly steady at between 5 and 6 percent. All in all, these two categories of routine jobs employed close to half of all working prime-age women in the 1970s, a share that plummeted to less than one-fifth by 2019. Among prime-age men, these jobs employed around a quarter in the 1970s compared with just 13 percent in 2019. Thus, it appears that the loss of these kinds of routine jobs may have been even more consequential for women than men.

Labor Market Changes
As routine jobs have disappeared, workers have shifted into other types of jobs, and there has been an increasing number not participating in the labor force at all. The chart below identifies labor market shifts between 2000, roughly when employment in routine jobs began to decline in earnest, and 2019. The chart shows the change in the distribution of all prime-age men and women between occupations and labor market status, including whether they were unemployed or not in the labor force. Each bar shows the percentage-point change in the share for each job category or labor market status. For example, among all prime-age men (working or not), the share in production jobs was 9.7 percent in 2000 and 6.4 percent in 2019, a decline of 3.3 percentage points—shown by the first blue bar. Note that the sum of all bars for each gender necessarily equals zero, since increases in the shares of some sectors must be offset by decreases in the shares of others. As such, these data present a comprehensive view of how job types and the employment status of all prime-age men and women has evolved over time. 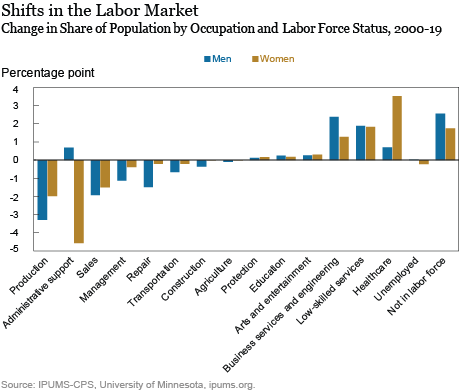 In addition to the shrinking share of prime-age men employed in production jobs, there were also declines in the shares of prime-age men working in other traditional blue-collar jobs, such as repair, transportation, and construction. On the flip side, a higher proportion of prime-age men worked in business services and engineering jobs in 2019, like chemical engineers, lawyers, and software developers, and in low‑skilled service jobs, which have seen significant growth in recent decades. Notably, there was a nearly 3-percentage-point increase in the share of prime-age men not in the labor force, a trend which has been highlighted in a number of recent research studies.

Conclusion
Contrary to conventional wisdom, men seem not to have been disproportionately affected by the decline of routine jobs. While the loss of blue-collar production jobs in the manufacturing sector has been quite steep among men, such losses have been even steeper in percentage terms for women. Further, there has been a significant loss of administrative support jobs among women, but not among men. The ability of workers to respond to the economic forces that have eliminated these kinds of routine jobs is more important than ever before. So far, women have shifted into health care jobs more than men, while men have shifted into business services and engineering jobs more than women. One troubling trend is that a larger share of both prime-age men and women now work in low‑skilled service jobs, or have left the labor force altogether.


How to cite this post:
Jaison R. Abel and Richard Deitz, “Women Have Been Hit Hard by the Loss of Routine Jobs, Too,” Federal Reserve Bank of New York Liberty Street Economics , March 4, 2020, https://libertystreeteconomics.newyorkfed.org/2020/03/women-have-been-hit-hard-by-the-loss-of-routine-jobs-too.html.


Posted by Blog Author at 07:00:00 AM in Inequality, Labor Market, Unemployment