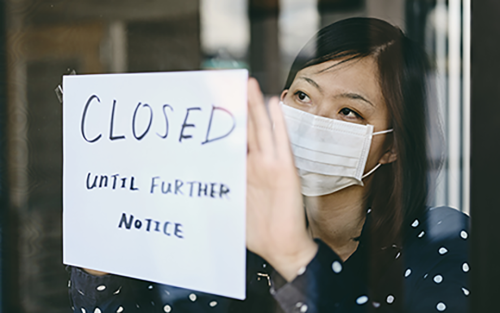 Business conditions were exceptionally weak in early April, according to respondents of our Business Leaders Survey, which covers service firms in the New York-Northern New Jersey region, and our Empire State Manufacturing survey, which covers manufacturing firms in New York State. As the chart below shows, the headline indexes in both surveys plummeted to nearly -80 this month. By way of comparison, the lowest level these indexes reached before this month was in the -40 to -50 range during the depths of the Great Recession. 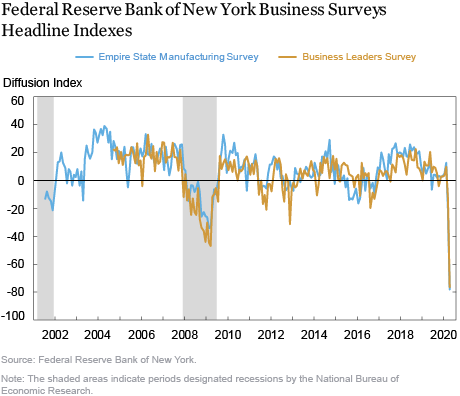 Job cuts among firms surveyed were extensive. More than half of all firms reported cuts to payroll staff as of early April. Among those firms that did cut staff, the average decrease was about 40 percent among service firms and 35 percent among manufacturers. Among leisure and hospitality firms, the incidence and size of job cuts were considerably larger. In terms of adjustments to work arrangements, 60 percent of workers in the service sector were working from home, on average—ranging from about a third in retail and construction to around 80 percent or more in the finance, information, and education sectors—as were about a quarter of workers at manufacturing firms.

Service firms tended to be pessimistic that conditions would be better six months from now, though manufacturers did expect to see some slight improvement, on net. Overall, the median firm expects the economic disruption caused by the coronavirus pandemic to last another 3 to 4 months. We will continue to monitor economic conditions in the region and provide timely updates as additional data and information become available. You can also visit our Community Resource Center on the coronavirus pandemic where individuals, businesses, and non-profits can find out what’s available to them at the federal, state, and local level.