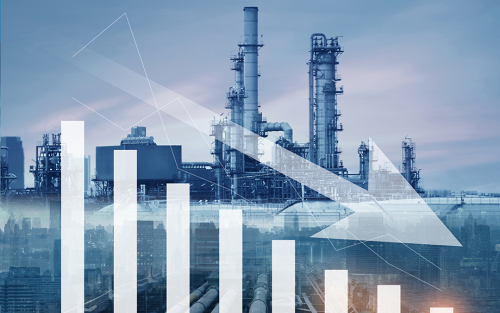 Since the outbreak of the COVID-19 pandemic in late January, oil prices have fallen sharply. In this post, we compare recent price declines with those seen in previous oil price collapses, focusing on the drivers of such episodes. In order to do that, we break oil price shocks down into demand and supply components, applying the methodology behind the New York Fed’s weekly Oil Price Dynamics Report.

Historic Oil Price Collapses
The recent drop in oil prices has certainly been severe, but large oil price declines are hardly unprecedented. Over the past four decades, four such episodes stand out:
In the chart below, we trace the fall in the price of Brent crude for each of these episodes, along with the decline experienced in the recent period: 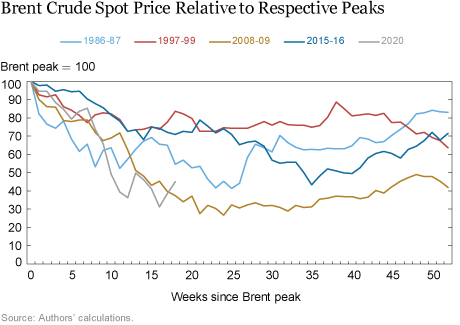 In order to gauge the importance of perceived demand and supply factors in driving these historical oil price selloffs, we apply the demand and supply oil price decomposition methodology from the New York Fed’s Oil Price Dynamics Report to these episodes. This decomposition employs the approach outlined in Groen, McNeil, and Middeldorp (2013) and Groen and Russo (2016), which uses a statistical model and a large number of financial market and high-frequency oil market variables (such as rig counts) to estimate factors from these variables that have the highest correlations with oil price changes. These estimated factors are then examined to determine how they reflect demand or supply dynamics. The two charts below depict the model-determined perceived supply and demand components of the Brent crude price movements from the first chart. 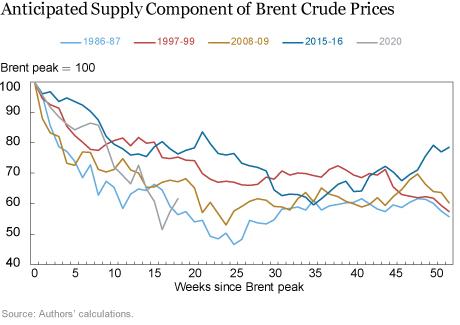 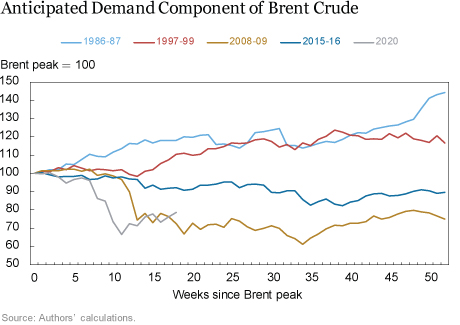 Analyzing the two charts above, it becomes clear that an increase in anticipated oil supply is the common ingredient of these selloffs. Conversely, the role of global demand expectations differs across these episodes. For example, in the 1985-86 and 1997-99 episodes, expansionary oil supply expectations dragged down prices while global demand expectations remained at worst constant and generally improved over the one-year period after the respective peaks in Brent crude prices. In the 2008-09 episode, however, the anticipated demand consequences of the Global Financial Crisis in itself led to a 30 percent plunge in Brent crude prices about three months after the peak in Brent crude oil prices. The fact that the 2008-09 selloff was driven by both demand and supply shocks resulted in persistently lower oil prices over the one-year period after the peak in those prices, whereas for the other selloff periods, which were supply-side driven, some of the price declines had been recouped by the end of this one-year window.

Putting the Current Oil Price Collapse in Context
When we compare recent oil price movements and their associated demand and supply components with those seen in prior selloff periods, it becomes clear that the developments of the past three months most closely resemble the pattern seen during the 2008-09 selloff. Both in the current environment and back in 2008-09 a combination of rapidly souring demand expectations and an ample perceived oil supply is what led to the collapse in oil prices. The difference this time is that the demand and supply outlook shocks occurred simultaneously, whereas in 2008-09 the oil price declines were initially set in motion by expanding oil supply expectations from higher OPEC production, followed by a deteriorating global demand outlook due to worsening global financial conditions. The shifts in investors’ expectations of global supply and demand did not reverse, resulting in persistently lower oil prices: a year after the initial peak in 2008, Brent crude prices were still about 60 percent lower.

Michael Nattinger is a research analyst in the Bank’s Research and Statistics Group.

Posted by Blog Author at 07:00:00 AM in Financial Markets, International Economics, Macroecon, Pandemic