What Do Financial Conditions Tell Us about Risks to GDP Growth? -Liberty Street Economics

What Do Financial Conditions Tell Us about Risks to GDP Growth? 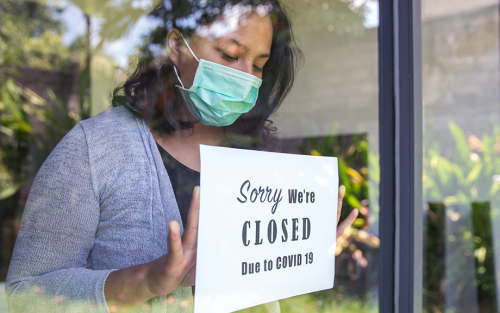 The economic fallout from the COVID-19 pandemic has been sharp. Real U.S. GDP growth in the first quarter of 2020 (advance estimate) was -4.8 percent at an annual rate, the worst since the global financial crisis in 2008. Most forecasters predict much weaker growth in the second quarter, ranging widely from an annual rate of -15 percent to -50 percent as the economy pauses to allow for social distancing. Although growth is expected to begin its rebound in the third quarter absent a second wave of the pandemic, the speed of the recovery is highly uncertain. In this post, we estimate the risks around the modal forecast of GDP growth as a function of financial conditions. Tighter financial conditions led to a widening in the left tail of the distribution of 2020 growth before weekly economic indicators showed any deterioration. The Federal Reserve and the U.S. Department of the Treasury took aggressive actions to reduce financial stresses and support credit flows—moves aimed at stemming long-lasting impacts from steep economic losses. While GDP growth will depend primarily on the speed with which many activities can be resumed safely, the improved financial conditions in April have reduced the likelihood that financial conditions and real growth will jointly deteriorate in the next few quarters.

Financial Conditions and Economic Indicators
Financial conditions tightened sharply in late February amid increasing uncertainty about the spread of the COVID-19 virus and an expected drop-off in economic activity due to social distancing measures. Stock prices fell, volatility spiked, and corporate bond spreads widened. A summary measure of financial conditions which incorporates correlations across asset prices, the Composite Indicator of Systemic Stress (CISS) for the United States, shown in the chart below, climbed in March to its highest level in more than a decade. The recent peak was below the record peak of the global financial crisis in October 2008, reflecting that the current crisis began as a negative shock to real economic activity that has significant repercussions for the financial system, rather than a crisis rooted in an overleveraged financial sector that harms the real economy. 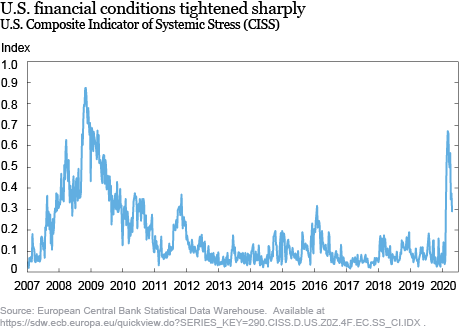 As financial conditions deteriorated, the Federal Reserve began to cut the policy rate and, together with the U.S. Treasury, announced a number of emergency credit and liquidity facilities, as indicated by event lines in the chart below. These policy actions were mostly taken before measures of economic activity—such as the Weekly Economic Index (WEI)—began their sharp decline the week ending March 21, a full three weeks after CISS rose in mid-February. 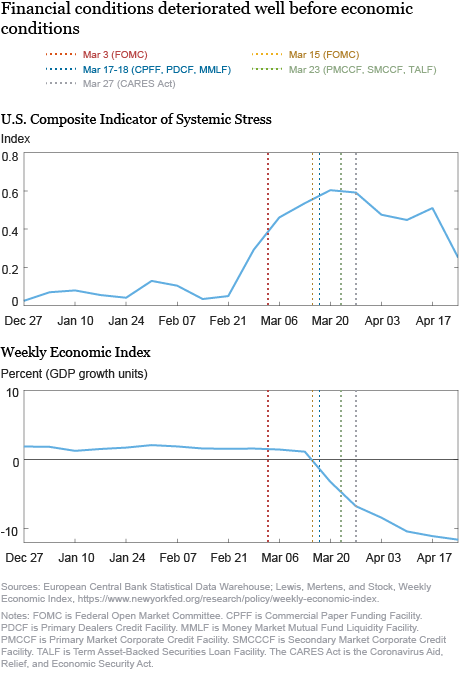 Vulnerable Growth
Real GDP growth was relatively strong before COVID-19 hit, with growth of 2.1 percent for the fourth quarter of 2019. Financial conditions were very loose by historical standards. The chart below plots the forecasted conditional one-year-ahead GDP growth distributions, estimated using quantile regressions as in Adrian, Boyarchenko, and Giannone (2019) and Adrian, et al. (2020). The distribution for year-ahead growth conditional on end of 2019 information (plotted in orange) was tight by historical standards, with a median of 2.9 percent growth (Q4/Q4) and a bottom-fifth percentile (lower left tail) of 0.4 percent. 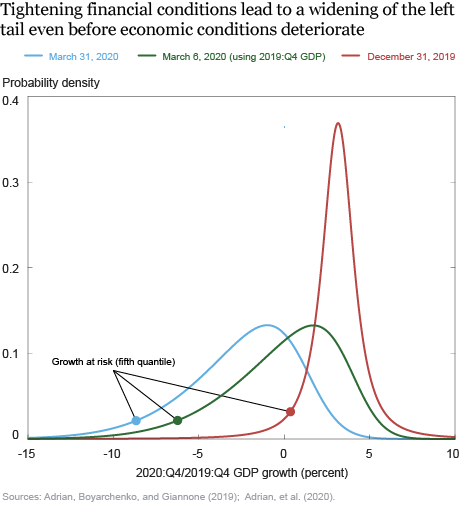 By March 6, 2020, CISS had risen to 0.4, and the forecast GDP growth distribution for the year through the fourth quarter of 2020 shifted to the left and widened notably (green line), despite no accompanying deterioration in real economic data. The fifth percentile of the growth distribution fell to -4.3 percent from 0.4 percent and the median fell to 1.4 percent from 2.9 percent. This shift highlights the crucial role that financial conditions play in determining the shape of the distribution: deterioration in financial conditions induces deviations from normality for the distribution, even before real activity indicators plunge.

As CISS tightened further to 0.6 by the end of the quarter and the advance GDP growth for the first quarter of 2020 printed at -4.8 percent, the median growth for the year through the fourth quarter of 2020 fell into negative territory -1.8 percent, and the fifth percentile fell sharply to -8.7 percent (blue line). Especially notable is that the left tail is very fat, and includes -12 percent at the first percentile, nearly the -13 percent reading in the worst year of the Great Depression.

Similar shifts in the year-ahead real GDP growth distribution from tighter financial conditions have been estimated for the euro area, and for the global growth distribution, as described in the International Monetary Fund’s Global Financial Stability Report (GFSR) of April 2020 (see the third chart of the GFSR blog).

Endogenous Real Activity and Financial Condition Indicators
The previous estimates do not allow for feedback effects between financial conditions and real activity. But tighter financial conditions can lead to weaker GDP growth if they disrupt market functioning and increase the costs of credit and reduce its availability. These interactions can be modeled with a joint distribution of economic and financial conditions, as described in Adrian, Boyarchenko, and Giannone (2019). The method provides a flexible means for modeling nonlinearities, allowing for asymmetries and multi-modalities.

The chart below plots the joint forecast distribution for 2020 real GDP growth and for end of 2020 financial conditions conditional on information available at three different times, the fourth quarter of 2019, the first quarter of 2020, and the second quarter of 2020. The joint distributions are represented as contour plots; that is, as a topographical map of the three-dimensional conditional distribution. More circular curves correspond to more normal distributions, and deviations from a circle represent deviations from normality. The distribution plotted in blue—which is conditional on information as of 2019:Q4 (prior to the COVID-19 shock)—is close to normal, with low probability of realizations of negative growth and tight financial conditions. 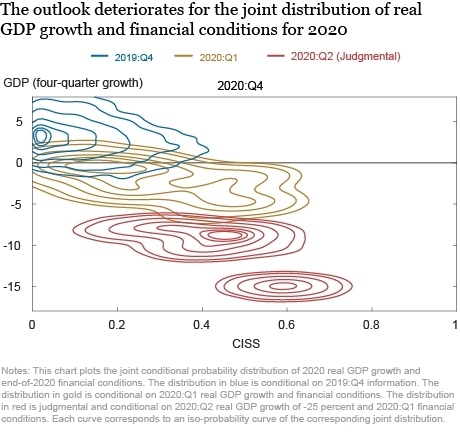 As we incorporate the evolution of real and financial conditions over the first quarter of 2020, the outlook deteriorates. The distribution plotted in gold is based on 2020:Q1 financial conditions and the initial estimate of first-quarter GDP growth, and leaves the remaining three quarters unknown. Downside risks to real GDP growth in 2020 increase sharply as the curves shift down and elongate relative to the distribution plotted in blue. These changes in the median and lower percentiles for GDP growth are consistent with the leftward shift in the probability density functions without feedback that were shown above.

Once we add some very negative but realistic forecasts for second-quarter GDP growth, the forecast distribution with feedback effects portrays a very severe expected outcome. In particular, the distribution plotted in red is based further on a judgmental 2020:Q2 real GDP growth forecast of -25 percent (in annualized terms), as large swaths of the economy have been shut down in April and unemployment insurance claims climbed steeply in four weeks to 25 million. Two distinct modes emerge, as indicated by the two distinct peaks of the distribution plotted in red. In the more benign mode, there is a positive feedback loop between growth and financial conditions, with the economy recovering noticeably in the second half of 2020 and financial conditions loosening, though remaining tighter relative to 2019 levels. In the more adverse mode, real GDP growth remains extraordinarily weak for the rest of the year and financial conditions remain extremely tight, which could arise from, for example, productivity losses as firms and workers adjust to social distancing protocols.

For comparison, the next chart shows the joint distribution for forecast real GDP growth and financial conditions for the year 2008, based on 2008:Q3 conditions after Lehman’s failure, which was also bifurcated. Comparing to the current distribution for 2020 conditional on a 2020:Q2 real GDP growth judgmental forecast, we see that predicted financial conditions outcomes in the more adverse mode are tighter (higher) in 2008 though the economic outcomes are substantially less negative. The differences are consistent with differences in the two crises: the COVID-19 shock is having a greater direct effect on the real economy and the housing bubble and the overleveraged financial sector had a more direct effect on financial conditions, with severe consequences for the real economy. 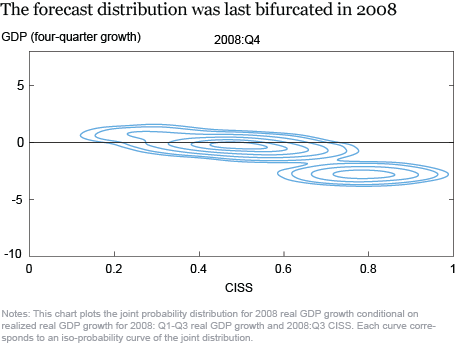 Finally, financial conditions have eased substantially in April. Financial markets are operating more smoothly and credit flows are restored, as there has been substantial easing of liquidity pressures from the Fed’s provision of emergency liquidity and from the government’s fiscal relief measures. There is also some evidence that the rate of spread of the virus is slowing. CISS has fallen from its recent peak of 0.6 to an average of 0.42 in April, and was as low as 0.25 in the last week of April. 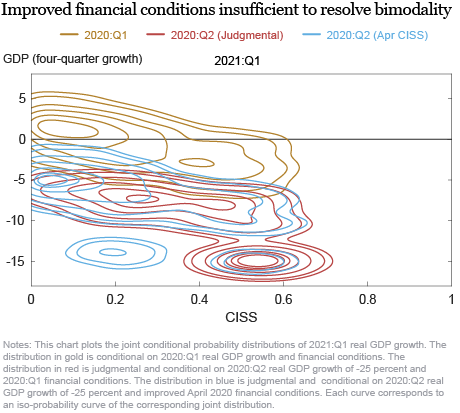 Conclusion
These results highlight that while there are significant differences in the past two crises—one originating from the real economy and the other originating from the financial sector—there are important similarities, with implications for the economic recovery. The similarities hint at the importance of the immediate and near-term policy responses to reduce the likelihood of the bad outcomes. Given the widespread impact of the COVID-19 shock on the real economy, however, broad policy responses, including public health and fiscal, may be required, in addition to those targeted at improving financial conditions.


Domenico Giannone was formerly an assistant vice president in the Federal Reserve Bank of New York’s Research and Statistics Group. His work on this post was completed while he was an employee.


Nellie Liang is the Miriam K. Carliner Senior Fellow in Economic Studies at the Brookings Institution.

Eric Qian is a senior research analyst in the Federal Reserve Bank of New York’s Research and Statistics Group.

Disclaimer
The views expressed in this post are those of the authors and do not necessarily reflect the position of the Federal Reserve Bank of New York or the Federal Reserve System. Any errors or omissions are the responsibility of the authors. The views expressed in this article do not necessarily represent those of the International Monetary Fund, its executive directors, or its management.

Posted by Blog Author at 07:00:00 AM in Forecasting, Pandemic, Systemic Risk

Thank you for sharing.

The documentation for the Eurozone CISS indicator states on page 17 that the weights of the sub-indices are determined according to the impact on the growth rate of industrial production.(https://www.ecb.europa.eu/ pub/pdf/scpwps/ecbwp1426.pdf, ECB Working Papers no 1426).
The ECB website seems to indicate that the methodology for the US CISS is similar.

Under these conditions, why link the CISS and the GDP? Is there a risk of overestimating the impact of changes in financial conditions on GDP (which is less "cyclical" than industrial production)?