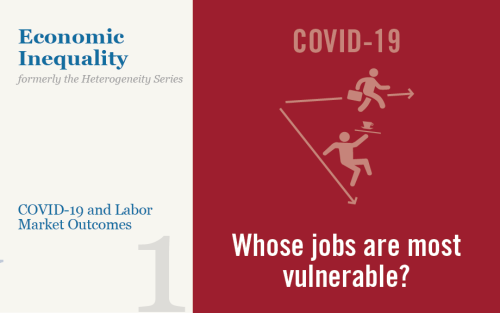 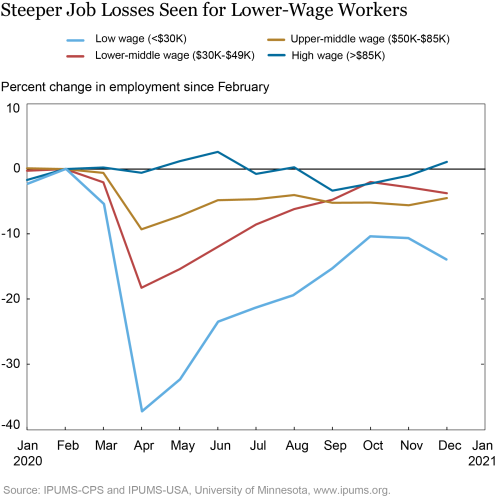 Why have lower-wage workers been hit so much harder during the pandemic? Much of it can be traced to differences in the types of jobs held among the groups. Due to a combination of government restrictions and behavioral changes people made to avoid exposure to the virus, the largest losses during the pandemic accrued to the leisure and hospitality industry—most notably, restaurants, bars, and hotels—as well as retail, both of which tend to employ large numbers of lower-paid workers. Further, lower-wage workers have much less ability to work remotely—think food servers and cashiers—compared to higher-wage workers, such as managers, accountants, and attorneys. In fact, according to new data collected by the Bureau of Labor Statistics after the pandemic began, an average of nearly 60 percent of workers in our high-wage group reported that they telecommuted during the pandemic, compared to less than 10 percent for low-wage workers, as shown in the chart below. This pattern is consistent with findings by our colleagues in a related post showing that workers in low-income areas are more likely to commute to work than workers in high-income areas, suggesting that such workers are more dependent on occupations that require in-person work. 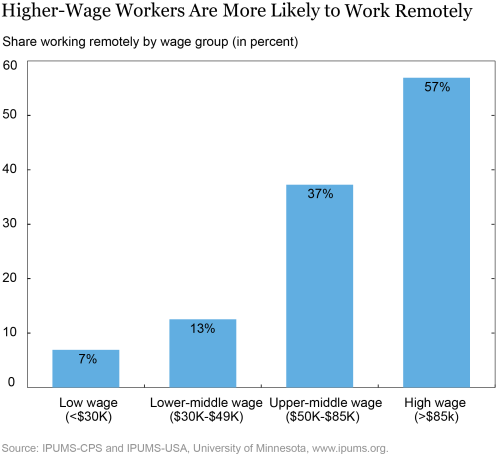 An Uneven Experience
More broadly, employment outcomes through the pandemic have been highly uneven among different types of workers, as shown in the chart below. We group workers into categories based on educational attainment, race and ethnicity, gender, and age. While we find big differences in initial job losses across groups of workers, many of the initial gaps that opened have narrowed considerably through the recovery. 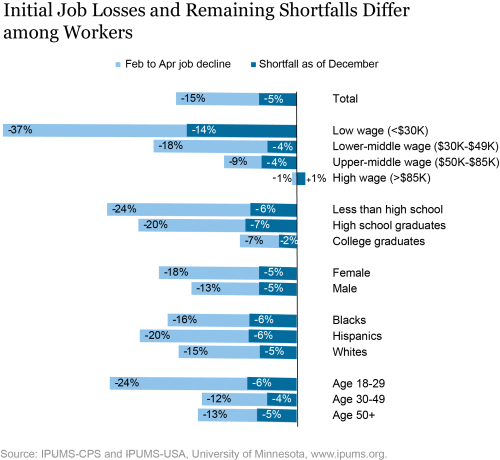 The length of each bar in the chart represents the magnitude of initial job loss, while the solid portion represents the remaining job shortfall at the end of 2020. Overall, for the nation as a whole, initial job losses totaled 15 percent and the remaining job shortfall is 5 percent. The first set of bars corresponds to workers of different wage levels, summarizing trends presented earlier. The next set of bars considers differences by educational attainment, and shows a similar pattern given the high correlation between education and wages. The least-educated workers—those without a high school diploma—saw employment fall by 24 percent, compared with 7 percent for workers with a college degree—a gap of 17 percentage points. By the end of 2020, job shortfalls totaled 6 to 7 percent for those without a college degree, compared with just two percent for those with a college degree—a smaller but still substantial gap of around 4 percentage points.

These differences in job losses early in the pandemic reflect a combination of factors. First, some groups may be overrepresented in the two industries hit hardest by the pandemic—leisure and hospitality and retail—including younger workers and those without a college degree. Further, some jobs have been easier to hold onto than others, particularly those that can be done from home, and different groups may be overrepresented in jobs that can or cannot be performed remotely. College graduates, for example, tend to have more flexibility in their jobs and a greater ability to work remotely. And, a factor that may help explain the outsized job loss among women is that women tend to bear more of the burden of childcare responsibilities, which have increased significantly during the pandemic due, in part, to schools teaching online and many students at home. This factor may have contributed to a disproportionate share of women not working in order to care for their children. There may also be differences in the willingness to work among different groups given the dangers of COVID-19. However, it is difficult to determine the nature and magnitude of these influences.

Interestingly, consistent with recent research, most of the gaps across demographic groups have narrowed considerably during the recovery, particularly as jobs have been added in the hardest-hit sectors. The shortfall between men and women has closed completely, while the gap between Black and Hispanic workers relative to white workers has closed to one percentage point. This is consistent with research by our colleagues which finds that the job finding rate among Black workers has risen above the corresponding rate for white workers. And, the remaining jobs shortfall among younger workers has narrowed to within a couple of percentage points of mid-career and older workers. Unfortunately, as the job market began to weaken in late 2020 due to a renewed surge in the virus, there are signs that some of these gaps have begun to widen once more, as many of the most vulnerable workers are yet again being hit hardest.


How to cite this post:
Jaison R. Abel and Richard Deitz, “Some Workers Have Been Hit Much Harder than Others by the Pandemic,” Federal Reserve Bank of New York Liberty Street Economics, February 9, 2021, https://libertystreeteconomics.newyorkfed.org/2021/02/some-workers-have-been-hit-much-harder-than-others-by-the-pandemic.html.
Related Reading
Which Workers Bear the Burden of Social Distancing Policies?
Economic Inequality Research Series
Economic Inequality and Equitable Growth
COVID-19: Information, Research and Analysis and Resources

Mr.Abel:
Will there be follow on research regarding the decrease in overall wage levels that have (or have not) been experienced by workers during the period 2020-2021? If the entire scale continues the "dual labor market" trends of the last thirty years, what will be the effects over the next five years, since we took quite long to recover wage levels after the 2008 debacle. I am an old man now, but have watched the labor share of the total economy shrink since at least 1975 (cf. Raj Chetty's work). Will the pandemic effects in fact just deepen the effective loss of purchasing power by the 90 percent? All best wishes in your work Dave Thomas Feb. 16, 2021