The pronounced weakness in personal consumption expenditures (PCE) for services has been an unusual feature of the 2007-09 recession and the slow recovery from it. Even in 2010:Q4, when real PCE increased at a relatively robust 4.1 percent annual rate, real PCE on services rose at only a 1.4 percent rate. This weakness has been especially evident in “discretionary” services (to be defined below), which fell more in the recent recession than in previous recessions and since have rebounded more sluggishly. In this post, I suggest that the continued sluggishness in these expenditures lends a note of caution regarding the sustainability of recent PCE strength. Because consumption accounts for about 70 percent of output, this in turn raises some concern about the future strength of the recovery.

How Severe Was the Fall in Discretionary Services?

The chart below shows how much real per capita (to account for differing rates of population growth over time) discretionary services expenditures fell from their previous peak—a zero value in this chart means that these expenditures were above their previous peak. The drop in discretionary services expenditures in the last recession was much more severe than in previous recessions: the nearly 7 percent fall from the peak is more than double the percentage decline in the early 1980s recession (the previous “champion” in this dimension). 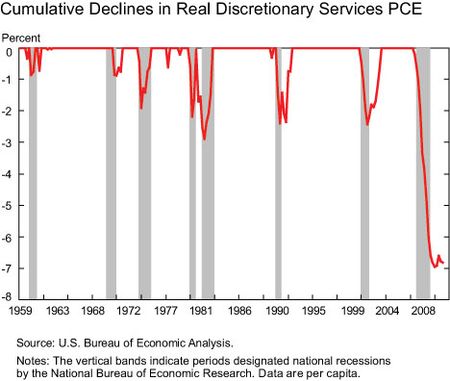 Furthermore, this outsized fall in discretionary services was an important contributor to the decline in real GDP during the recession. Suppose discretionary services expenditures had fallen about 2 percent in the recession, comparable to the declines in the previous two recessions. With no differences in other GDP components, the peak-to-trough decline in real GDP per capita then would have been about one percentage point less than the actual decrease, which is the difference between a GDP fall similar to previous severe postwar recessions (the 1973-75 and 1981-82 recessions) and the exceptional (about 5 percent) decline that we observed instead.

How Weak Has the Recovery Been in Discretionary Services? 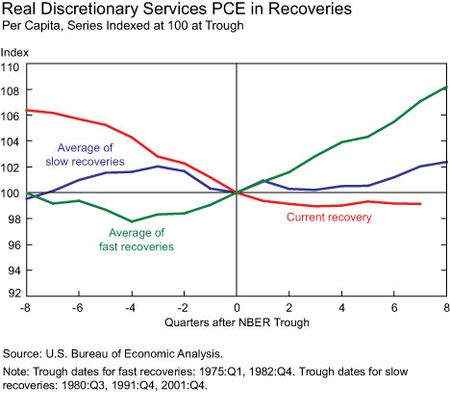 What Should We Take from These Developments?

However, the fact that discretionary services expenditures remain significantly below their previous peaks is of concern for the overall economic outlook. Although these expenditures can be deferred in instances of temporary income drops, the sluggish recovery in these expenditures suggests, consistent with the permanent income/life cycle hypothesis, that households may perceive more persistent shocks to their overall wealth. For example, homeowners may expect house prices to recover only slowly at best, and thus the decline in housing wealth to be more persistent. Also, households may remain wary about their employment and income prospects, suggesting that they may have lowered their future income expectations. Accordingly, the continued sluggishness of discretionary service expenditures at this point in the expansion lends a note of caution regarding the recently improved economic growth outlook.

I agree with the life-cycle hyposthesis and the permanent income perceived change to explain why the consumer is more careful but I also suspect that reduced availability to credit might have reinforced the process.