Consumer Goods from China Are Getting More Expensive

We find that, in a sharp reversal of earlier trends, U.S. import prices for consumer goods shipped from China have been rising rapidly in recent quarters—by 7 percent between 2010:Q2 and 2011:Q1. In this post, we track U.S. import price movements in Chinese goods in different product categories by creating an import index that uses highly disaggregated data. We also consider the likely causes of the recent rise in prices for consumer goods. If these price hikes persist, they could have important consequences for U.S. businesses and consumers because China is the largest single supplier of U.S. imports, accounting for more than 20 percent of non-oil imports.

In order to identify trends in import prices of consumer goods from China, we construct our own price index, because official statistical agencies only provide aggregate price indexes. Each month, the Bureau of Labor Statistics (BLS) publishes an aggregate U.S. import price index that averages price movements across all source countries. The aggregate index in turn is divided into separate indexes by type of goods imported, referred to as end-use categories, which include industrial supplies, consumer goods, capital goods, and autos. In addition, the BLS computes a separate price index for some source countries, including China. These country-specific indexes, however, are not broken out by end-use categories.

The BLS began publishing its index of Chinese import prices relatively recently, in December 2003 (see chart below). Since its introduction, the index has depicted two periods of rising import prices, the first one in 2007-08 and the second beginning in mid-2010. To explore the forces behind these price increases, we construct an index that tracks import prices of consumer goods from China for a longer time period, going back to 1997, and decompose the index by product type (see the discussion of our methodology). 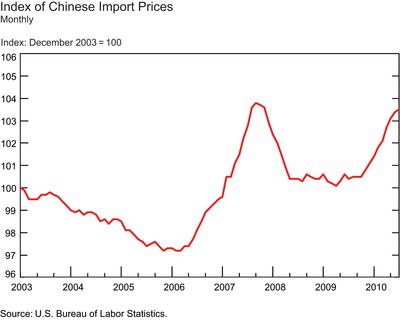 It is difficult to know whether the upward movements in the aggregate price index are broad-based or driven by global pressures in commodity and oil prices. Deconstructing this index into major product categories, we see that until recently import prices of consumer goods have either been falling or were fairly flat. This is evident in the chart below, which plots our unit value indexes for three categories: consumer goods, capital goods, and industrial supplies. We also include the U.S. dollar-renminbi (RMB) exchange rate. The chart shows that between 1997 and 2005, when the RMB was pegged to the dollar, prices in all major categories of imports from China were on a downward trend. This trend reversed itself when the RMB was allowed to appreciate against the dollar in 2005.

By separating commodity-intensive industrial supply prices from other categories, we see that between 2005 and 2009 higher import prices of goods from China were mainly driven by jumps in industrial supply prices—goods that rely heavily on commodity inputs. Over this four-year period, consumer prices only increased 7 percent, even though the nominal RMB appreciated 20 percent against the dollar. 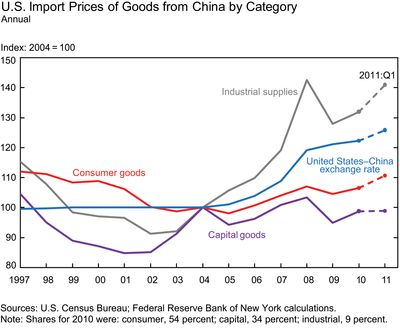 This pattern changed in mid-2010, when the RMB started to appreciate again. Import prices of consumer goods rose by 7 percent between 2010:Q2 and 2011:Q1, a period in which the nominal RMB appreciated 4 percent against the dollar and the CPI-adjusted real RMB appreciated nearly twice as much. This can be seen more clearly in the chart below, which uses quarterly data and which we were able to construct only for a shorter period; the chart plots the quarterly unit value index for consumer goods and the CPI adjusted real dollar-RMB exchange rate. 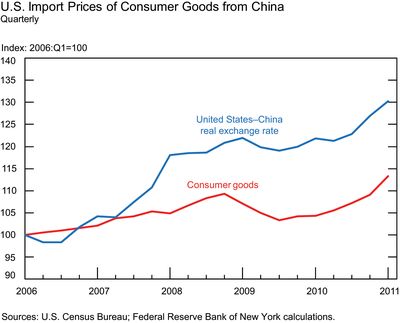 What’s behind the Rising Consumer Prices of Goods from China?

Sharply increasing wages for Chinese workers and other escalating costs faced by Chinese firms in the country’s coastal manufacturing export hubs may be contributing to the rising prices of consumer goods shipped to the United States. Indeed, heightened unrest by workers demanding improvements in pay and double-digit wage-increase settlements have been making headlines in recent years (see, for example, Economic Times, New York Times, and Financial Times). Although data used to construct manufacturing unit labor costs are far from ideal, we estimate that wage-based unit labor costs resumed their upward trend in 2010 at the fastest pace in at least a decade, after dipping in 2009 due to a softening of China’s manufacturing labor market during the global economic crisis (see chart below). Moreover, the government enacted a major new labor law in 2008 that has likely driven up overall costs for firms. 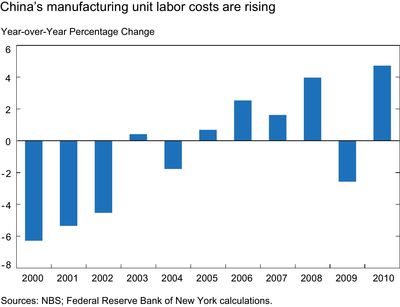 Cyclical and structural factors are likely contributing to the rise in Chinese manufacturing unit labor costs. In particular, strong wage growth has partly reflected the very rapid cyclical recovery of Chinese manufacturing following the post-Lehman global trade shock, as well as the role of stimulus policy in generating greater incentives for migrant workers to stay closer to their home provinces inland rather than move to the coast to find jobs. Structurally, China is generally acknowledged to be undergoing a profound demographic shift to a rapidly aging society at an unusually early stage in economic development. China’s prime manufacturing cohort of people ages fifteen to thirty-nine has already peaked in size, and the United Nations projects that the working-age population as a whole will peak sometime over the next decade (see chart below). This implies that the days of seemingly limitless “surplus” labor supply may be nearing an end. And indeed, anecdotal reports of labor shortages in China’s coastal manufacturing provinces have surfaced periodically since at least 2003 (see, for example, Financial Times and “Chinese Workers Get Perks—Labor Shortage Spurs Firms to Court Factory Employees Pressure on Pay—and Prices,” Wall Street Journal, August 16, 2004)—about the time manufacturing unit labor costs started to rise. 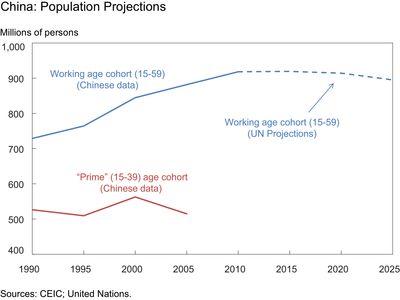 The Dawn of More Expensive Consumer Goods from China?

Firms may be able to partially adapt to heightened labor shortages in China’s coastal manufacturing hubs by enhancing efforts to raise productivity and by moving factories inland, where labor remains considerably cheaper. However, over the longer term, the demographic shift facing China is real, as is the government’s desire to encourage faster household income growth, rebalance the economy away from investment and toward consumption, encourage the development of inland provinces, and develop higher-value-added industries. This suggests that while China’s days as the world’s factory may not be numbered, the prospect of continued rising prices of Chinese goods seems highly likely.

More expensive consumer goods from China would represent a significant shift in U.S. inflation pressures, given China’s history of being a low-cost supplier of consumer goods to the United States. While it is difficult to assess the precise impact of changes in import prices on U.S. inflation, there are a number of channels we can identify. First, higher prices of imported consumer goods contribute directly to the U.S. CPI. Second, imported goods also enter into the production of domestic goods as some of these are intermediate inputs, which contribute directly to U.S. producers’ costs and thus add further pressure to increase the price of domestic goods. Third, higher import prices of Chinese goods may allow competitors, which include other exporters to the United States and domestic producers, to also charge higher prices and thus increase their mark-ups. Alternatively, competitors may try to gain market share by keeping their prices low and thus offset some of the inflationary pressures from the higher import prices of Chinese goods.

Since mid-2010, we have started seeing upward pressure on prices of consumer goods from China. This coincides with the RMB appreciation against the U.S. dollar, increased pressure on wages, and inflation in China. Going forward, the demographic shift in China along with efforts to encourage faster household income growth suggest the upward trend in prices of Chinese goods will continue.