The Federal Reserve introduced the Term Auction Facility (TAF) in December 2007 to provide term loans to banks during the recent financial crisis. In this post, we report on the effectiveness of the TAF during the early stages of the crisis. We find that the TAF was associated with a decrease in the “liquidity premium,” one component of a bank’s borrowing cost. In other words, the TAF worked as intended.

During fall 2007, the spread between the London interbank offered rate (Libor) and the overnight indexed swap (OIS) for loans of one-month maturity or longer rose to unusually high levels (see chart below). It is widely believed that the increase in the Libor–OIS spread reflected the heightened risk perceived by investors at the time, in part due to the increased uncertainty of access to the short-term loan markets. Since Libor affects interest rates on a wide variety of loans and securities (for example, home mortgages and corporate loans), the sudden spike in the spread was disruptive to the debt market and negatively affected the economy. The chart and the accompanying table also show six announcements related to the TAF program. The announcements indicate increases in TAF funding, with the exception of announcement 4 (in green), which indicates a decrease in the availability of TAF funds in February 2008. 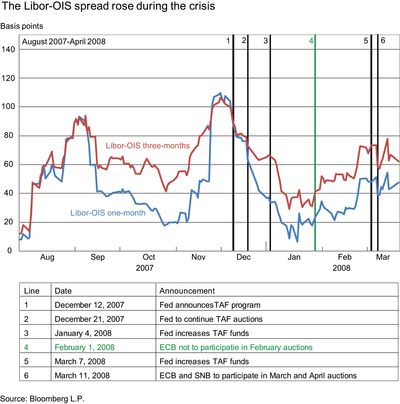 The TAF facility provided term funding through periodic auctions to eligible depository institutions that were in sound financial condition. The total amount of funds available at any TAF auction was announced in advance by the Fed, and the rate (known as the “stop-out rate”) was set in a competitive auction among the participating depository institutions. Those depositories with the highest bid rates received funds at the stop-out rate. Through auctions, the Fed provided term funds to depositories that needed it most, with the intention of alleviating strains that had arisen from the unwillingness of sound institutions to lend to one another or to borrow from the discount window individually. Armantier, Krieger, and McAndrews discuss the design of the TAF in detail.

From December 17, 2007, to April 21, 2008, the Federal Reserve completed ten TAF auctions providing mostly twenty-eight-day term loans. There was substantial demand for funds at the auctions during that period. The number of banks bidding for the term loans in the TAF varied between fifty-two and ninety-three, and the bid/cover ratio (that is, the total amount of funds bid as a ratio of funds auctioned) ranged from 1.25 to 3.08. The amount of term loans auctioned was $20 billion in each of the first two auctions, $30 billion in the next four auctions, and $50 billion in the last four auctions. The chart below shows a steady increase in the amount of TAF loans outstanding (reflecting new loans less old loans repaid by banks) as the money markets became increasingly stressed. 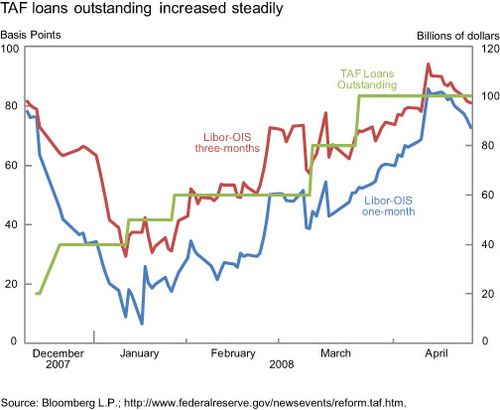 Why did the Fed think the TAF could be helpful in reducing the liquidity risk premium (represented by the Libor–OIS spread) in the term interest rate? One reason could be that banks with surplus funds were hoarding them rather than lending them out to other banks—because they were uncertain about their own sources of future funding, they expected greater funding needs themselves, or both. By providing term funds to banks at regularly scheduled auctions, the TAF may have assured lenders of continued access to future funding and thereby reduced their uncertainty regarding anticipated funding needs. 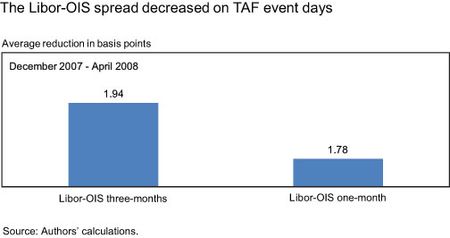 While the Fed initially committed to only four TAF auctions, it subsequently announced that TAF funding would be provided “as long as necessary.” (The TAF program ended in March 2010.)  Announcements of the continuation and expansion of the TAF program may have been just as important in reassuring fearful lenders in the money markets as were the actual auctions themselves. In fact, when we break out the effects of TAF announcements and operations on the Libor–OIS spread (see chart below), we see that the announcement effects were indeed substantial. Therefore, exclusion of the announcement effects would result in a severe underestimation of the benefits of the TAF program, perhaps leading to the erroneous conclusion that it did not bring down interest rates. 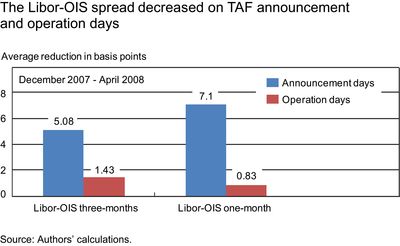 The TAF was just one of many facilities designed by the Fed during the crisis to improve liquidity conditions in various asset
markets. By focusing on the early period of the crisis (before May 2008), we are better able to isolate the effects of TAF from other funding facilities that were introduced in the later stages of the crisis. Identifying the impact of a liquidity facility such as the TAF was crucial for the design of other funding facilities during the crisis. Data indicate that the TAF complemented the Fed’s efforts to support and improve the liquidity in short-term funding markets.