Each of these disasters has some features in common with Sandy. Hurricane Andrew made a direct hit on the city of Homestead, Florida, in
Miami-Dade County in August 1992. High winds destroyed about 26,000 homes in the county, displacing almost 160,000 residents. Homestead Air Force Base, a key employer in the area, was heavily damaged and nonoperational for almost two years. Hurricane Katrina came ashore close to New Orleans as a Category 3 hurricane in September 2005, and was the most costly disaster in U.S. history. The storm surge overwhelmed the system of levees and flooded about 80 percent of the city, destroyed more than 200,000 homes, and displaced almost 750,000 residents—many to areas outside the region and the state. The earthquake in Northridge,
California, which occurred on January 17, 1994, heavily damaged portions of major roads and freeways that served hundreds of thousands of daily commuters, as well as destroyed residential property. The 9/11 attack on the World Trade Center damaged or destroyed almost 30 million square-feet of office space and caused major disruptions to the urban transportation infrastructure in Lower Manhattan. Regrettably, as with
superstorm Sandy, lives were lost in all four disasters.

To assess the path of recovery on the heels of these disasters, we analyze monthly employment counts in the broad geographic area encompassing each event to track the dynamics of impact and recovery. The chart below plots an index of employment in the New Orleans metropolitan area (seven parishes), Los Angeles and Miami-Dade Counties, and New York City. The index is set to 100 at the month prior to the disaster, and
traces the change in employment from twelve months before the occurrence to sixty months after. 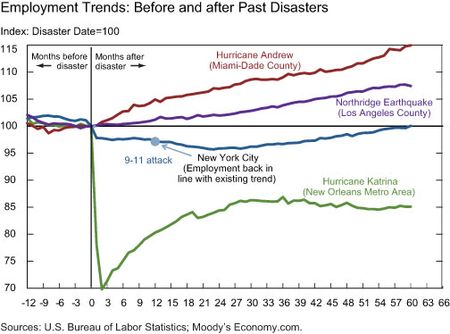 Initial Impacts
The disruptions to economic activity are clearly most severe immediately
after each disaster. In each of the four events, the negative effects on
employment appear largely concentrated in the first two months after the
disaster. Even so, employment effects were negligible following Hurricane
Andrew and the Northridge earthquake: Miami saw just a one-month pause in its path of job growth and Los Angeles saw no dip at all. In contrast, employment effects were much more severe following the 9/11 attack and especially Hurricane Katrina. In New York City, a downturn in employment was already under way in early 2001 and, at the time of the attack, jobs had fallen by 30,000 from their cyclical peak. Between August and October 2001, another 120,000 jobs were lost before leveling off, for a cumulative decline of roughly 4 percent; we estimate that about two-thirds of that decline—in effect, the portion that occurred in October 2001—is attributable to the attack. This trend paled compared with the
30 percent decline in employment, or about 180,000 jobs, in the New
Orleans metro area in September and October 2005.

Recovery
A rebound of employment from a disaster generally gets under way quickly. The recovery process varies by disaster, but typically is driven by activity to clean up and restore the site of the disaster and repair or rebuild the damaged infrastructure. Federal funds, the resilience of the public and private sectors in the affected areas, and policy decisions made in the days and weeks following the disaster all combine to influence the strength and rapidity of the recovery. The recovery in Miami and Los Angeles got under way fast. Miami, where overall employment had been expanding modestly for about nine months prior to the hurricane in August 1992, saw double-digit increases in construction jobs over their year-ago levels starting in September 1992 and continuing through most of 1993. A similar trend was observed in Los Angeles County, where construction jobs accelerated sharply the month following the
earthquake and remained strong for almost two years after. The quick start of the recovery process likely offset much of the disaster-related job losses in the immediate aftermath of these disasters.

In New York City, the impact of 9/11on jobs was confounded by ongoing recession-rela ted reductions in employment. Our earlier study of job trends in the city following 9/11 tried to take account of both sources of weakness, and our estimates show that within a year after the attack jobs there were roughly at the level they would’ve been had the attack not occurred. It took almost five years for the city to regain the level of employment in place at the time of the attack, but that recovery was actually quicker than ones in either of its two prior downturns. The clean-up and restoration of the attack site proceeded fairly quickly, but the rebuilding of the destroyed office space in the two World Trade Center towers didn’t commence for a number of years. In New Orleans, employment turned around sharply after Katrina, but there were a lot of lost jobs to recover. Construction jobs in the area, which had fallen by one-third in September 2005, began to expand in October, and by December they were already above their year-ago levels; construction employment remained high for the next fourteen months. In other industries, though—such as finance, and leisure and hospitality—employment remained well short of pre-Katrina levels.

Longer-Term Effects
One concern with disasters is whether they reduce the long-term growth
potential of an area. Of these four disasters, only New Orleans failed to
regain the jobs it had lost. The scale of Hurricane Katrina, particularly the
mass destruction of homes and the large outmigration, was unprecedented. The economy had also been stagnant for eighteen months prior to the hurricane, and actually had seen little job growth since the late 1990s. The confluence of a weak economy, massive physical destruction, and a dispersion of a large share of the population combined to prevent New Orleans from fully recovering to its pre-Katrina level of employment.

Implications for the New York-New Jersey Region
Superstorm Sandy disrupted a number of industries in the region. In our survey of manufacturing firms in New York State, which was undertaken more than a week after the storm, all firms in the New York City area indicated some reduction in activity, with 90 percent reporting they
were shut down for at least one day and 40 percent for five days or more.
And new claims for unemployment insurance rose sharply in both New York and New Jersey during the second full week following the storm. These adverse effects were concentrated in November. Going forward, the net effects on employment will depend on whether these disruptions are severe enough to offset the restoration and rebuilding now under way. Pockets in the region that bore the brunt of the storm surge will face great challenges to fully recover, but prior disasters suggest that the New York-New Jersey region as a whole will rebound in the months ahead.

We share your optimism not only about the metro area as a whole, but also for the individual cities, towns and neighborhoods that were hardest hit. Many of these communities were devastated and some were without power for months. While some neighborhoods in New Orleans did not recover from Katrina, that seems to be more the exception than the rule. For example, it is encouraging to note that, not only did the broad Miami area snap back from Hurricane Andrew but so did the city of Homestead–the epicenter of damage. Despite that hurricane, the population of Homestead increased by 19% between 1990-2000 and by another 90% by 2010. In addition, the 1938 (Long Island Express) hurricane completely destroyed many coastal communities, but as we note in a recent Historical Echoes blog on that disaster (http://libertystreeteconomics.newyorkfed.org/2012/11/historical-echoes-the-aftermath-of-a-devastating-hurricane-in-1938.html), those communities (which included the Hamptons and a large swath of Fire Island) bounced back as well.

A very interesting comparison. I’m glad to see that the recovery after a disaster is quick and considerable. I have no doubt that the New York and New Jersey area will be quick to rebound as well.