« Historical Echoes: Neither a Lender nor a Borrower Be, or When the Bard Met the Fed | Main | Underwater and Drowning? Some Facts about Mortgages that Could Be Targeted by Eminent Domain »

Why do large
movements in exchange rates have small effects on international goods prices? This
empirical regularity is a central puzzle in international macroeconomics. In a
new study, we show that the key to understanding this exchange rate disconnect is to take into account that the largest
exporters are also the largest importers. This is important because when exporters
import their intermediate inputs, they face offsetting exchange rate effects on
their marginal costs. For example, a depreciation of the euro relative to the U.S.
dollar makes exports in U.S. dollars cheaper—but it also makes imports in euros
more expensive. Using Belgian firm-level data, we show that exporters that
import a large share of their inputs pass on a much smaller share of the
exchange rate shock to export prices. Interestingly, import-intensive firms typically
have high export market shares and hence set high markups and actively move
them in response to changes in marginal cost, thus providing a second channel
that limits the effect of exchange rate shocks on export prices. Our results
show that a small exporter with no imported inputs has a nearly complete pass-through
of more than 90 percent, while a firm at the 95th percentile of both import
intensity and market share distributions has a pass-through of 56 percent, with
the two mechanisms playing roughly equal roles. These findings have important implications for
aggregate macroeconomic variables.

The Data
The National Bank of
Belgium, our primary data source, provides highly disaggregated export and
import data at the firm level. The data set includes information on
approximately 10,000 distinct product categories by destination and source
country. We use unit values to proxy for a firm’s export price, defined as the
ratio of export value to export quantity. One potential problem with this
measure is that, even within this fine level of disaggregation, there may still
be compositional shifts within the product categories. However, studies that
draw on price data have not been able to match import and export prices at the
firm level.

Most importantly, using the trade data enables us to construct an exporter’s
import intensity, which is an essential ingredient for this study. The firm’s
import intensity is defined as the ratio of imported intermediate inputs to
total variable costs as described in our theoretical framework. It is important
to know the country source of a firm’s imports so that we can net out the
imports originating from within the euro zone since these are in the same
currency as Belgium domestic costs. In order to get a measure of the firm’s
total variable costs, defined as total material costs plus the wage bill, we
merge the trade data with firm-level characteristics. We can also directly
measure a firm’s marginal cost that is potentially sensitive to exchange rate
movements as an import-weighted change in the firm’s import prices, which we
proxy for using unit values (the ratio of import value to import quantities). The
final key ingredient in the study is a measure of the firm’s market share in
each destination, which we construct for each firm-product-destination-time.
This measure is an indicator of the firm’s mark-up variability.

Stylized Facts about Exporters and
Imports
A new interesting stylized fact to emerge from our analysis is that there
are large systematic differences across exporters. Previous studies have
emphasized the differences between exporters and non-exporters, highlighting
that exporters are bigger, more productive, and pay a wage premium—features
that are also present in our data. However, even within the select group of
firms that are exporters, there are very large differences between high
import-intensive exporters and low import-intensive exporters. Splitting the sample
based on the median import intensity, we show in the table below that
import-intensive exporters are larger in terms of employment and material
costs, pay higher wages, are more productive, have higher market shares, export
higher values, and export to more destinations; they also import more products
and from more countries. These patterns turn out to be important in explaining
the heterogeneity of exchange rate pass-through into export prices across
different firms. Furthermore, because high import intensity firms are also
firms with high export shares, these results help explain low aggregate
pass-through.

Indeed, a large share of exports comes from large firms that source their inputs
globally and are thus only partially linked to the domestic market conditions
in their home country. As a result, these firms are effectively hedged against
the exchange rate fluctuations and do not need to fully adjust their prices.
Furthermore, these are the strong-market-power firms, setting high markups,
which they actively move in response to shocks. Our results provide evidence
that high market share firms have more variable markups. To sum up, the prices
of the largest firms, accounting for the disproportionate share of trade, are
insulated from exchange rate movements both through the hedging effect of
imported inputs and active offsetting markup adjustment in response to cost
shocks.

Conclusions
We show that taking
into account that large exporters are also large importers can help explain
differences in exchange rate pass-through across firms as well as low aggregate
pass-through. Further, we decompose the incomplete pass-through into the
marginal cost channel and mark-up channel, finding a roughly equal contribution
of each channel. These results have important implications for international
macroeconomics as price sensitivity to exchange rates is central for the
expenditure-switching mechanism at the core of international adjustment and
rebalancing. Understanding why there is incomplete pass-through is important
from a welfare perspective as the implications differ if incomplete
pass-through is due to different distributions of markups across firms or to
complex global sourcing patterns, which directly affect marginal costs. 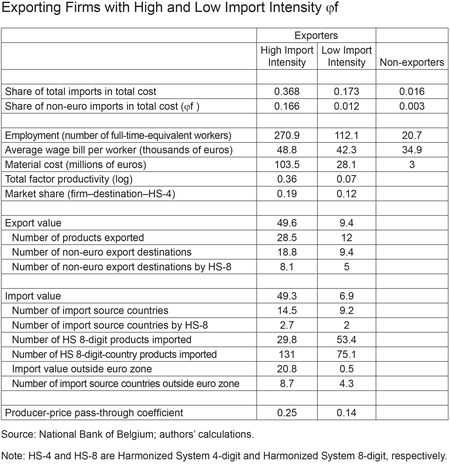 Mary Amiti is an assistant vice president in the Federal
Reserve Bank of New York’s Research and Statistics Group.

Oleg Itskhoki is a professor of economics at Princeton
University.

Jozef Konings is professor of economics at University
of Leuven.