« Waiting for Recovery: New York Schools and the Aftermath of the Great Recession | Main | Historical Echoes: The Changing Face of Education in the United States »

Catching Up or Falling Behind? New Jersey Schools in the Aftermath of the Great Recession

Today’s post, which complements Monday’s on New York State and a set of interactive graphics released by the New York Fed earlier, assesses the effect of the Great Recession on educational finances in New Jersey. The Great Recession severely restricted state and local funds, which are the main sources of funding for schools. To help avoid steep budget cuts to schools, the federal government allocated $100 billion for education as part of the American Recovery and Reinvestment Act of 2009 (ARRA), also known as the stimulus. The stimulus money was meant to provide temporary relief to strained state and local budgets. However, after the stimulus funds were exhausted, the economy was still weak and school districts were faced with large budget shortfalls.

In this post, we discuss some key findings from our recent study exploring New Jersey’s experience during the past four years. How did the state’s school districts handle the sharp revenue decrease caused by the recession? How did they use the stimulus money? What did they do once the stimulus money was used up?


To study these questions, we combine over a decade’s worth of detailed budget data from the New Jersey Department of Education’s Finance Office and demographic data from the Department of Education to create a rich panel data set. We use a trend-shift analysis to determine the gap between districts’ actual finances and a projected estimate based on the prerecession trend, after adjusting for demographic and socioeconomic characteristics. For easier interpretation, we express this gap as a percentage of the prerecession value of the corresponding school finance indicator.


Our analysis reveals that the recession had a statistically significant negative effect on school district funding and, perhaps more importantly, this gap grew even larger as time progressed. The chart below shows the percentage gap in per-pupil funding and per-pupil expenditure. Each bar represents the percentage shift from trend in that year. For example, the blue bar represents the shift in school year 2008-09, the red bar in 2009-10. For simplicity, from now on we’ll use the spring term to denote the school year. Looking at the chart, we see that in 2009 and 2010 per-pupil funding was approximately 13 percent below our expectation based on its earlier trend. Notably, the gap widened considerably in the latter two years, growing to 19 percent and 21 percent in 2011 and 2012, respectively. 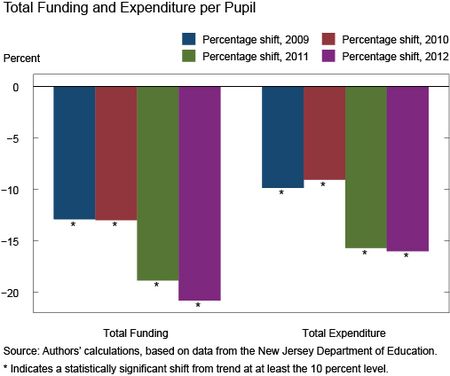 Looking more closely at district finances, we see that the recession and stimulus brought about significant changes in how districts are funded. Our set of maps visualizing this change shows that the percentage of funding from the federal government shot up in 2010 across the state, then experienced an almost equally dramatic decline from 2010 to 2012. 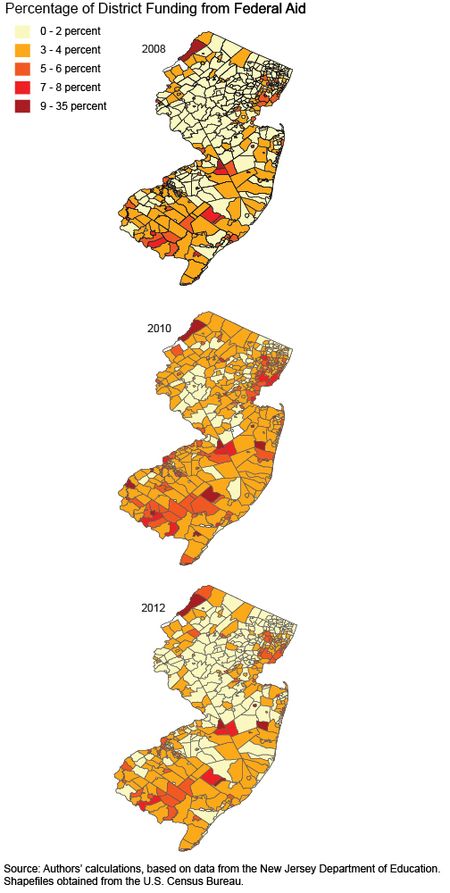 The next chart shows the percentage shifts in federal, state, and local funding per pupil. The effect of the stimulus is clearly visible in the large shift upward in per-pupil federal aid in 2010. The withdrawal is also clearly visible in the return to trend in 2011 and the large negative shift in 2012. Meanwhile, state aid fell significantly in all four post-recession years, with the largest shift occurring in 2011. This was the year that the state reduced aid to all districts by approximately 5 percent of the district’s prior-year general fund budget. In 2012, the state restored 2 percent of the funding, which explains the improvement from 2011 to 2012, although state aid was still significantly below trend in 2012. As housing prices fell, so did property tax revenue, which is the primary component of local revenue, so we see drops in local funding in all four years as well. Despite the fact that local funding fell during all four years, the share of district revenue coming from local sources actually increased during this period, because state and federal aid were falling at an even greater pace. 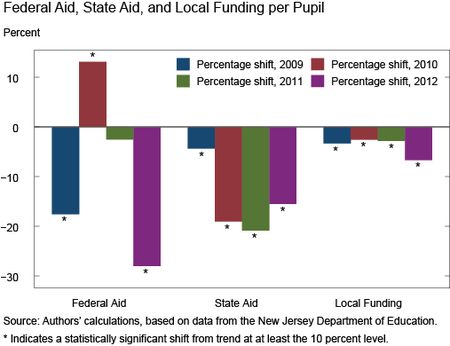 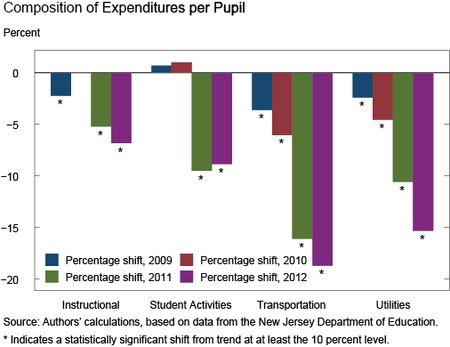 Student activities (which includes extracurriculars and sports teams), another category related to student development, was maintained during the first two years but was cut significantly (both economically and statistically) in the latter two. Noninstructional expenditures were cut much more—transportation and utilities experienced significant cuts in all four years, although the cuts were much more drastic in the latter two.


Our analysis uncovered some interesting findings. New Jersey school districts’ funding and expenditure were cut sharply following the recession and, rather than recovering, the gap between prerecession expectation and the reality has grown steadily. While the stimulus was a successful stop-gap, its depletion, along with deep cuts in state aid (and less drastic cuts in local funding) left school districts with very tight budgets. As a result, expenditure cuts were made across-the-board. Whereas districts had previously avoided cutting instructional expenditure, in 2011 and 2012 instructional spending fell sharply as pressures on school funding increased. While we don’t know yet what effect these spending cuts will have on educational outcomes, it’s clear that districts are having difficulty supporting their activities and operation. Cuts to instruction, student activities, and social services can potentially affect students in harmful ways. As economic conditions improve, school finance conditions (both funding and spending) are expected to ease, but we don’t know how long it will be before finances return to trend.