« Historical Echoes: What Color Is My Day of the Week? | Main | A Way With Words: The Economics of the Fed’s Press Conference » 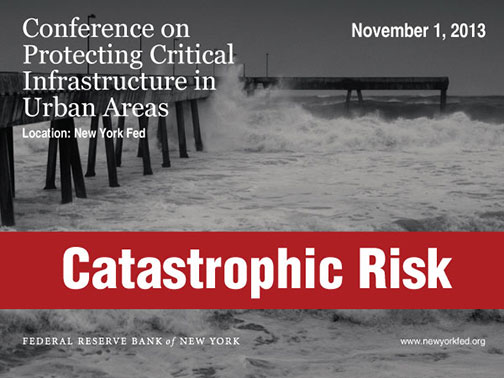 On November 1, the Federal Reserve Bank of New York hosted the conference “Managing the Risk of Catastrophes—Protecting Critical Infrastructure in Urban Areas.” Superstorm Sandy caused significant damage and destruction of a broad range of property—telecommunications, gas, and electrical utilities; bridges, roads, tunnels, and mass-transit facilities; and, in many parts of the region, local businesses and single and multi-family housing. The disruption of economic activity in the lives of our region’s residents was widespread, and highlighted the need to examine ways to limit adverse effects of future extreme-weather events. This post reviews the conference and provides links to interviews with some of the conference participants, who are among the world’s leading experts in this area. Click on the participant’s name to be taken to the post-conference interview with that expert and on the highlighted key words to be taken to his or her presentation.

In opening remarks, Research Director Jamie McAndrews noted that the challenge faced by policymakers to plan for and respond to disruptions caused by these extreme events is complex. A region’s urban infrastructure is critical to business, workers, and residents, and its functioning is an important contributor to economic growth. Without it, employees are unable to get to work and businesses cannot communicate with suppliers and customers, leaving them unable to conduct key operations. Thus, there is a pressing need to assess the risks posed by projected climate change and to develop strategies and approaches that reduce the vulnerability of a region to potentially catastrophic risks.

In the keynote address, Robert Stavins provided a broad overview of the economics and geopolitics of climate change policy. He described the economic view of climate change as a “global commons” problem that requires international cooperation to solve. After reviewing climate policy developments in the United States, he described the evolution of international climate negotiations, characterizing them as a marathon and not a sprint. He noted that because of the carbon buildup and its failure to dissipate, the issue is a stock rather than a flow environmental problem. Thus, even if harmful emissions were eliminated tomorrow, it remains necessary for local areas to adapt and manage the risks of climate change to their infrastructure.

In the first panel, Patricia Grossi discussed the role of catastrophe models in describing the risk of hazards, such as earthquakes, hurricanes, and other natural disasters, to critical infrastructure. These models assess risk based on the exposure and vulnerability of a region’s infrastructure to these disasters, allowing calculations of future expected losses of disasters and the uncertainty around these estimates. At the regional level, the models help policymakers identify key risks to infrastructure.

The second panel offered an economic framework for decision making regarding protecting critical infrastructure. Howard Kunreuther proposed an insurance program whereby state and local governments would purchase coverage to protect their infrastructure. The proposal was motivated by uncertainties about how much and how soon federal aid would be provided following a disaster. The insurance policies would be multi-year, reflect the best estimate of the risk, and contain financial incentives for governments to make their infrastructure more disaster-resistant. In the same session, Rob Lempert addressed the difficulties of developing policies to protect infrastructure when the costs and benefits are highly uncertain. He presented a robust decision-making framework that offers a means of weighing alternative strategies in situations of deep uncertainty or when parties disagree on the likelihood of occurrence of extreme events and the associated costs. A potential limit on the scope of policies to protect infrastructure arises from the tendency of decision makers to see the future as much like the past. Lempert argued that a wide range of potential outcomes needs to be considered.

At the luncheon address, Michael Oppenheimer explored the scientific evidence behind climate change. He showed that climate models can explain the correlation between increased levels of atmospheric greenhouse gases and the increased rate of warming. This warming is seen to cause sea-level rise, which threatens coastlines and also results in an increased intensity of severe weather events, such as hurricanes. These trends increase the tail risk for New York City. With the northeast coast of the United States experiencing sea-level rise higher than the global mean, New York City, at the high estimate (ninetieth percentile), would see a thirty-one-inch increase in the sea level by the 2050s. For the immediate future, Oppenheimer also noted that wet areas in the United States were likely to continue to receive more than historically normal precipitation, while dry areas would have an increasing probability of becoming drier. Both the probability and frequency of heat waves and storm surges are expected to rise in areas like New York City.

The next panel covered aspects of public- and private-sector strategies to reduce risk and losses. Stephane Hallegatte discussed a number of obstacles to better risk management. For the public sector, these challenges include not only imperfect information about future disasters and tight budgets, but also the asymmetry between costs and benefits. If the disaster never occurs, or occurs in the far future, it may not be worth today’s investment. Policies need to acknowledge the existence of large uncertainties and decision makers need to consider approaches that can be revised as more information becomes available. Co-panelist Adam Rose discussed the role of resilience, or the ability and speed of a system to recover from a disruption. He stressed that the private-sector losses from business interruption caused by natural disasters are as important as direct structural losses. Resilience measures that promote the recovery of a region following a disaster, such as a buildup of inventories or a strategy for arranging alternative suppliers can be effective and low-cost. He also discussed the importance of locally-based measures that can help indicate the vulnerability of different parts of a region to disasters. For example, rural flooding along the banks of the Mississippi River would require different recovery assistance than densely populated urban areas where mass-transit facilities, public housing, or cell towers were destroyed or damaged.

The final panel focused on protecting infrastructure in New York City. Klaus Jacob noted that, absent mitigation, the city faces an increasing risk of flooding. He recommended a number of initiatives the city could undertake, including updating building codes and rezoning to reduce the potential for future flood risks. He also said that public capital investments should adequately incorporate climate change risks and avoid potentially costly, subsequent retrofits. Cynthia Rosenzweig presented data documenting the risk to the city of escalating temperatures, increasing rainfall, and rising sea levels. She noted that higher temperatures portend heat waves and rising mortality rates associated with such heat, as well as electrical facilities taxed to operational capacity during such periods. She argued that, in the coming years, New York City is also more likely to be hit with hurricanes and punishing storm surges that flood mass transit. Superstorm Sandy, she argued, was a warning that highlighted the need to examine ways to limit the adverse effects of future extreme weather events on our critical infrastructure. She noted that Mayor Bloomberg and the New York City Council had made the city’s Panel on Climate Change a permanent committee for reviewing, assessing, and recommending policies to protect the city going forward.

Seth Pinsky noted several realizations by city policymakers from Superstorm Sandy, including the need to think long term, to take a citywide perspective on vulnerable areas, and to look carefully at the broad array of risks associated with climate change. Proposed investments to protect the city’s infrastructure include coastal defenses as well as building and zoning codes to reduce risks to private property from extreme events. New York State offers, and will continue to offer, buyouts to homeowners in areas that cannot be reasonably protected from storm surges, extensive damage, and loss in coming years. Pinsky’s focus was on prevention where it might prove cost effective and resilience in areas where prevention may not be effective.

Most of the experts who spoke at the conference agree that we do not know enough to justify some of the more costly mitigation and resilience measures—even assuming that they would be effective. What they tended to agree on was the need to continue to take small steps as we learn more and to be prepared to take big steps (typically requiring decades to gain consensus, plan, and implement), so that we are prepared should the knowledge we acquire in the coming years justify such action.

Rae Rosen is a vice president in the Bank’s Regional and Community Outreach Group.

Max Livingston is a senior research analyst in the Research and Statistics Group.

Eric Stern is a senior policy analyst in the Regional and Community Outreach Group.