Creditor Recoveries
We estimate the payout ratio to Lehman’s creditors thus far to be about 28 percent on estimated allowable claims of more than $300 billion, implying a loss to creditors and counterparties of more than $200 billion. (We use “Lehman” to refer to the holding company and its subsidiaries as an ensemble; otherwise, we specify the particular Lehman company subsidiary.) In order to provide a benchmark, we compare the recovery rate for senior unsecured creditors of Lehman’s holding company, Lehman Brothers Holdings Inc. (LBHI), with those of similar creditors in the past. We find that the recovery rate for LBHI creditors has been below average so far—about 27 percent versus more than 55 percent historically (see chart below). Our article shows that this remains true even after accounting for prevailing economic conditions (for example, recessions, industrial distress, and poor credit conditions) likely to result in a recovery rate lower than the historical average. The Lehman estate is scheduled to make further distributions to creditors, but it remains to be seen how much further recovery rates can improve. 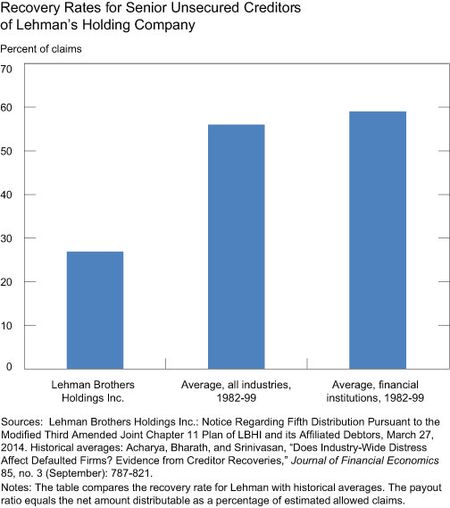 There was substantial variation in recovery rates even for similar creditor groups. For example, of Lehman’s derivative subsidiaries, creditors of three subsidiaries received full recovery on their claims but those of the largest subsidiary (LBSF) suffered substantial losses (see chart below). The variation in the recoveries depended on what was negotiated between LBHI creditors (who had claims on the holding company) and derivative creditors (who had claims on the subsidiaries), whether LBHI guaranteed the debt of the subsidiary, whether the securities were centrally or bilaterally cleared, and how the U.S. Bankruptcy Court interpreted various provisions of the Chapter 11 code. 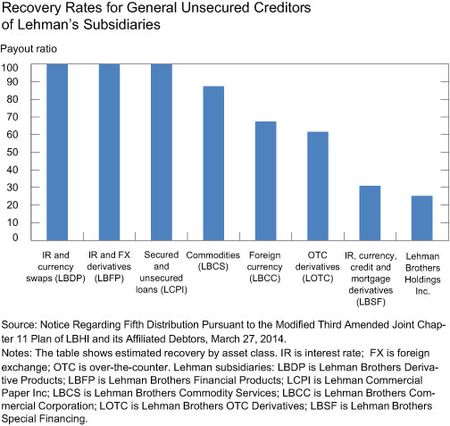 Some Factors Affecting Losses
Some of the losses borne by Lehman investors emanated from the manner in which Lehman failed; they might have been avoided in a more orderly liquidation process. For example, because Lehman filed for bankruptcy abruptly, the value of Lehman’s estate might have been reduced through the loss of derivative receivables that could otherwise have been unwound (see the Examiner’s report, page 725) and by the lack of bankruptcy planning—a factor that contributed to the ensuing litigation with creditors.

Creditor losses would have been more substantial without the ability of LBI, the U.S. brokerage subsidiary of LBHI and subsequently Barclays (which purchased most assets of LBI), to finance positions through the Federal Reserve’s liquidity facilities (see chart below). Such financing was critical to LBI’s remaining a going concern pending the finalization of its sale to Barclays (which in turn allowed the quick transfer of LBI customer accounts to Barclays). Since then, the Dodd-Frank Wall Street Reform and Consumer Protection Act has circumscribed the ability of the Federal Reserve to act as lender of last resort to the same extent that it did during the recent financial crisis. 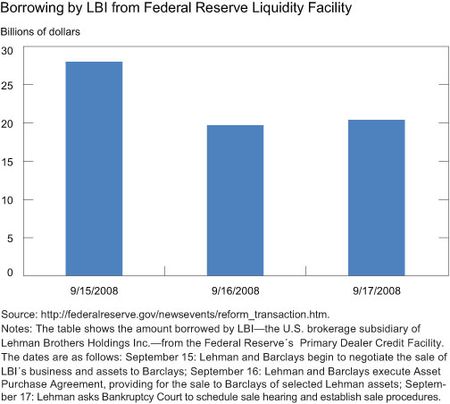 Settlement of OTC Derivative Claims
Our study focused particularly on the settlement of claims relating to Lehman’s over-the-counter (OTC) derivative positions. Much of the complexity in Lehman’s resolution was rooted in these settlement procedures. For example, the settlement of different groups of derivative creditors followed different tracks (see chart below). Moreover, derivatives receive special treatment under Chapter 11 through exemptions or “safe harbor” from several provisions of the U.S. Bankruptcy Code. However, questions have been raised regarding the desirability of providing these exceptions. For example, the executive director of the Bank of England’s special resolution unit has recently argued that the onset of bank resolution should not, by itself, be considered an event of default that allows counterparties to quickly terminate derivative contracts, as happened with Lehman (see the left branch in the chart below). 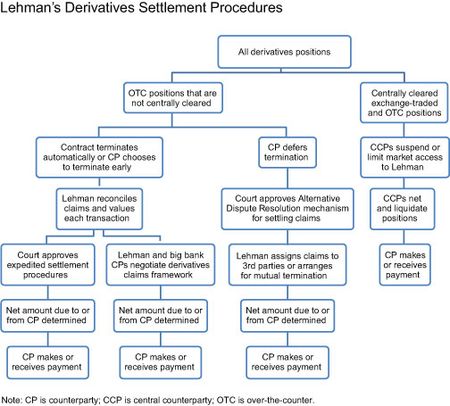 Effectiveness of Derivative Settlement Procedures
We assess the effectiveness of the derivative settlement procedures with respect to their speed, predictability, and transparency. Lehman’s bankruptcy has so far lasted more than five years, as compared with an average of twenty months for previous bankruptcies. We find that the speed of resolution varied across claimant groups. Many OTC derivative counterparties of Lehman terminated their contracts within weeks of LBHI’s bankruptcy filing, as was allowed under the safe harbor provisions (see the leftmost branch in the above chart). In contrast, certain derivative contracts of large, institutional counterparties—a small share of Lehman’s derivative contracts by number but a significant share by value—took far longer to terminate (see the branch “CP defers
termination” in the above chart). Moreover, the final settlement of derivative claims involves multiple steps (as shown in the chart above), starting from termination and valuation of claims and ending in the netting and paying out of claims. Even in cases where termination occurred rapidly, final settlement proved to be a long, drawn-out process and, indeed, remains ongoing (see chart below).

The settlement process was long because the Lehman estate was obligated to do due diligence on numerous complex claims on an individual basis. Further, its determination of claims was frequently litigated. Lehman’s organizational complexity also resulted in delays. For example, in some instances, Lehman and its counterparties were uncertain of the identity of the specific Lehman subsidiary against which creditors had claims. Finally, Lehman’s interconnectedness led to delays as LBHI creditors argued in court that they were entitled to a portion of recovery from subsidiary assets because the holding company had guaranteed some of the subsidiaries’ debt.

The predictability of the outcome of claims settlement in the Lehman resolution was hindered by the novelty of its financial structure (in the context of bankruptcy cases). Chapter 11 proceedings are based on case law relating to the Bankruptcy Court’s prior interpretations of cases. While existing case law provided a useful starting point for Lehman’s resolution, the court provided new interpretations of provisions in the Bankruptcy Code (for example, regarding some aspects of the safe harbor provisions for derivatives). In part, this is because Lehman held many complex financial securities that were subject to litigation during the bankruptcy proceedings. The Bankruptcy Court had to analyze these securities for the first time and sometimes came out with judgments that surprised observers.

The Lehman estate provided substantial ongoing information regarding the progress of resolution. Reports by the estate and dockets of judicial proceedings are archived on a web site. In some cases, however, the information was either incomplete or reported in an inconsistent and piecemeal manner that made it difficult to obtain an accurate and integrated view of the outcomes of the bankruptcy proceedings.

Conclusion
The difficulties associated with Lehman’s resolution under Chapter 11 resulted in part from Lehman’s lack of bankruptcy planning and in part from the inherent complexity of Lehman’s business and organizational structure. Given that the bankruptcy of Lehman-type firms is rare outside of a crisis, it would be challenging for the Bankruptcy Court to quickly build the expertise required to deal with such cases effectively. Indeed, Title II of the Dodd-Frank Act gives regulators the option of replacing Chapter 11 with an alternative mechanism (the Orderly Liquidation Authority) for resolving large, complex organizations.

Chris, Thank you for your comment. As with many bankruptcies, losses incurred before the bankruptcy filing may be an important determinant of the ultimate recovery rate, aside from the efficiency of the resolution process itself. We discuss some of the factors affecting recovery rates in Section 5 of our paper (http://www.newyorkfed.org/research/epr/2014/1412flem.html), but our focus here is on factors concerning the resolution process, as opposed to pre-bankruptcy factors.

Is is just possible that the low recovery rate is due to fraud? Does the term “true sale” suggest any possible areas for future research? What would Justice Louis Brandeis say about the “sales” performed by Lehman, from Repo 105 to the subprime RMBS? http://papers.ssrn.com/sol3/papers.cfm?abstract_id=2399614 Best, Chris