Can Investors Use Momentum to Beat the U.S. Treasury Market?

Decades of research have produced a library on the “momentum” anomaly in markets. Momentum refers to the tendency for financial assets with the best prior returns to continue to produce superior results, at least for a time. Previous findings—regarding individual U.S. stocks as well as foreign shares, broad equity indexes, commodities, and currencies—contradict the common wisdom that markets are efficient. Curiously, even though the market for nominal U.S. Treasury securities is among the deepest and most liquid in the world, no one has rummaged through government bond term structures to find similar strategies that work, no matter what the future general direction of interest rates. Yet my recent staff report describes simple low-cost trading rules that produce positively skewed and sizable excess returns, merely by directing investors to construct portfolios of maturities that have had superior returns. Neither short sales nor exposure to interest rate risk is required.

Just how does the strategy work, and what are the risks? Consider six Barclays Capital total return indexes of the nominal U.S. Treasury market—the one- to three-, three- to five-, five- to seven-, seven- to ten-, ten- to twenty-, and twenty- to thirty-year maturity buckets. Following convention, measurement of momentum along the term structure is based on average historical total returns for each maturity category, and researchers generally calculate those averages from between two through five months ago to two through as many as thirteen months prior. For example, for a five-month window length, the momentum on the twenty- to thirty-year maturity bucket observed for July 2013 refers to the average total return from January 2013 through May 2013, and correspondingly, the twelve-month momentum for July 2013 refers to average returns calculated between June 2012 and May 2013. In turn, the momentum portfolio simply comprises the allocation across the six buckets that has had the greatest return over a given window, under two simple constraints. First, the portfolio weights are bound between zero and one to preclude short sales, and therefore the strategy is fully suitable for long-only investors. Second, the allocation produces the same weighted-average duration as the benchmark. In other words, any anomalous excess return over the index cannot represent compensation for relative exposure to future parallel movements in interest rates.


Excess returns on this long-only strategy suggest a sizable anomaly given all index return data available on durations, market weights, and total returns from Barclays, beginning in December 1996 and ending in July 2013. As the chart below shows, the average annual excess return over the benchmark is about 120 basis points, given a window between two and nine months. The ex post tracking error—the standard deviation of those excess returns in annual terms—is 153 basis points, for a safely statistically significant information ratio, a measure of investor skill, of 0.79. 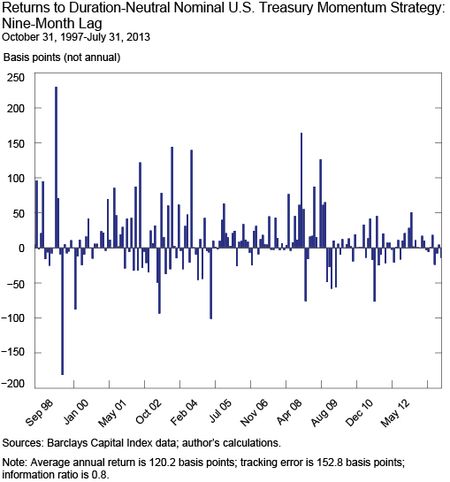 Returns seem fairly steady, with few extended periods of losses, and unlike value strategies, the strategy would have paid the investor well through the global financial crisis. In addition, given that profitability does not seem to vary significantly over time, the so-called limits to arbitrage, which broadly refer to capital constraints and transaction costs that keep investors from exploiting the law of one price, seem much less pronounced than in some currency momentum strategies. And, unlike momentum returns in other asset classes as well as carry trades for that matter, the returns are positively rather than negatively skewed using alternative measures of tilt across the distribution (see the chart below). 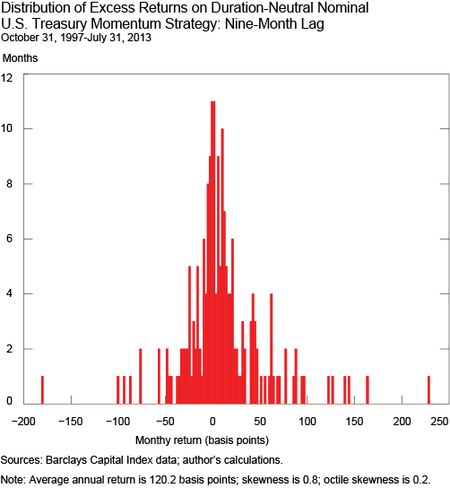 In addition, the findings are insensitive to the length of the momentum window, and in contrast to currency momentum, trading costs appear to be modest—the implied average bid-ask spreads required to wipe out the statistical significance of these trading profits range from about 9 to 56 basis points, considerably greater than contemporary quotes that rarely exceed a couple basis points even for the most seasoned CUSIPs. Finally, relaxing the constraint on short sales produces even greater abnormal returns. A simple strategy that is simultaneously long the portfolio with the most momentum but short the allocation with the least—in effect a “Treasury-market-neutral strategy”—produces average excess returns as high as 207 basis points, with information ratios up to 1.01, positively skewed returns, and similarly modest trading costs.


These results seem promising, but they are not anomalous if they reflect other “risk” compensation besides exposure to parallel curve shifts. The standard approach to assess broad risk exposure is to test for correlations between these returns and a number of common factors, such as the S&P 500 returns, macroeconomic variables, interest rate and equity option-implied volatility, measures of Treasury market liquidity, corporate bond spreads, and seasonal factors. Briefly, such analyses suggest that term structure momentum is unrelated to such risks. No model explains returns from the strategy, and if anything, term structure momentum appears to hedge key exposures even more than a benchmark allocation to U.S. Treasuries.

Beyond broad risk metrics, another consideration with this particular asset class is whether momentum embeds some information about risks captured by so-called arbitrage-free Gaussian affine term structure models (GATSMs). The issue is not necessarily whether momentum violates arbitrage or the law of one price, but rather whether abnormal returns compensate investors for exposure to nonparallel interest rate shifts along the curve. In other words, do duration-neutral momentum strategies simply coincide with a long position in forward term premiums, as estimated from popular GATSMs?


Forward term premiums, defined as the compensation investors require to lend to the U.S. Treasury over longer as opposed to shorter periods, indicate precisely where along the curve investors receive the greatest compensation for bearing interest rate risk. The following chart shows recent estimates through the ten-year horizon from alternative models. Forward term premiums from the widely cited Kim and Wright (2005) GATSM, noted by the solid black line, are lowest around the two- to three-year point along the term structure. What does this mean for an investor with, say, a three-year duration target? Higher term premiums at the one- and five-year horizons, and conversely lower term premiums at the three-year horizon, imply that she should expect to be paid more to hold a three-year duration barbell or butterfly portfolio than a three-year duration bulleted allocation. In other words, the model says that she should hold an equally weighted portfolio of one- and five-year bonds, as opposed to one with only three-year securities. The duration of both portfolios is three years, but the GATSM suggests that expected returns on the butterfly are greater. 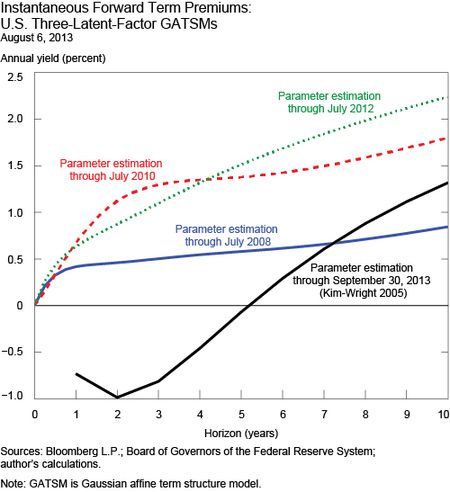 Similar to the construction of the momentum portfolios described previously (see my staff report for details), excess returns on duration-neutral portfolios based on term premium estimates are positive to varying degrees, depending on alternative GATSMs. These results are neither surprising nor “abnormal” if the GATSMs have any validity, because each portfolio by construction has the greatest estimated ex ante compensation for duration risk possible under the constraints.


What does this have to do with the momentum anomaly? One way to evaluate the finding, then, is to test whether momentum trading profits correlate with these GATSM-based portfolio returns—that is, whether the alphas are positive. Indeed, momentum does seem to track forward-term-premium-based portfolios, but hardly completely. GATSM returns account for about 37 percent of the variation of the anomaly on average—a finding that implies some modest association. But, every beta is less than one, and as shown below, the alphas are positive, with a statistically significant average of about 5.25 basis points per month. 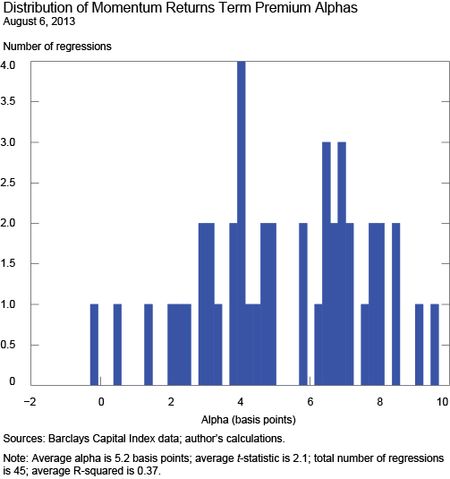 Another test is more concise and draws from the notion, presented in another staff report (Adrian et al. 2013), that a GATSM can be represented by a regression of returns on the pricing kernel, if it is an affine (that is, linear plus intercept) function of the underlying factors. Therefore, an alternative is simply to run regressions of momentum returns on, say, the first three principal components of the term structure. These analyses produce even greater alphas—about 16 and 22 basis points for the long-only and long-short strategies, respectively.

These simple momentum trading rules seem to represent more than fair compensation for risk. But to be sure, the determination of pure alpha—like the slippery distinction between skill and luck—is never wholly conclusive. One could even argue that momentum returns capture the true, unobservable term premium that GATSMs fail to identify. In addition, further research on term structure momentum patterns would be useful, given lingering questions about the behavioral norms that produce abnormal returns in government bond markets in particular. Meanwhile, some version of the standard proviso that “past returns do not guarantee future performance” remains applicable, even for momentum.

Hello, I have only looked at the article quickly, but I did not see the answer to the following question – what is the relationship between excess returns and absolute index returns (or the level of the 10-year yield)? Although your construction is duration neutral, that does not neutralise non-parallel yield curve shifts (such as the shift of the first principal component). Thanks.