« Introduction to the Floating-Rate Note Treasury Security | Main | Can Investors Use Momentum to Beat the U.S. Treasury Market? »

The recent financial crisis has highlighted the significance of unhedgable, illiquid positions in complex securities for individual financial institutions and for the global financial system as a whole. Indeed, the Basel Committee on Banking Supervision notes that

One of the key lessons of the crisis has been the need to strengthen the risk coverage of the capital framework. Failure to capture major on- and off-balance sheet risks, as well as derivative related exposures, was a key destabilizing factor during the crisis.

While concepts like marking-to-market and risk weighting of individual positions are incorporated in all three pillars of the Basel III capital regulation, the academic literature has lagged in providing a robust, model-free way of implementing these in practice. In a recent New York Fed staff report, my coauthors and I propose a methodology to compute lower and upper bounds on prices of complex, potentially nontraded securities that’s robust to possible misspecifications of cash flows to these securities. I review the main advantages of this approach in this post.

Valuation of uncertain payoffs is the fundamental question of financial economics. If an illiquid asset’s payoffs were perfectly replicable by payoffs of a portfolio of liquid securities (whose prices can be observed directly), then the price of that asset could be computed as the price of the replicating portfolio. This is a direct consequence of the law of one price and the absence of arbitrage: A cash flow should be priced the same regardless of whether an investor receives it by investing in a single security or in a portfolio of securities. But when the uncertain payoffs of the asset in question cannot be perfectly replicated, the law of one price has very weak implications for the price of the asset. While absence of arbitrage arguments can be used to provide an upper bound (ask price) and a lower bound (bid price) on the price of the security, these bounds tend to be very wide for most securities of interest. This is the case with most derivatives – after all, if a derivative’s payoff were perfectly replicable with other liquid assets, there would be no reason for the derivative to exist – as well as for real assets, such as loans, held by financial institutions. In this case, additional restrictions are needed to narrow the distance between the bid and the ask price on the security.


Cochrane and Saa-Requejo (2000) introduce an economic consideration into the pricing of illiquid securities by restricting the maximum Sharpe ratio achievable by trading in a portfolio of both the liquid basis assets and the illiquid focus asset. The Sharpe ratio is the ratio between the expected return to a position and the standard deviation of the return, and is commonly used as a measure of how well the position compensates the investor for risk taken. Cochrane and Saa-Requejo (2000) argue that, just as arbitrage opportunities are ruled out for providing investors with a positive return for zero risk (effectively giving an infinite Sharpe ratio), high Sharpe ratios should also be ruled out for providing investors with unreasonably high returns for low levels of risk. If a strategy with a high Sharpe ratio were to exist, investors would want to follow the strategy in their trading, reducing the expected return and, thus, the Sharpe ratio of the strategy. The upper (ask price) and lower (bid price) valuations of illiquid securities should satisfy the same principles and thus be restricted from delivering “good deals” that violate the Sharpe ratio bound. 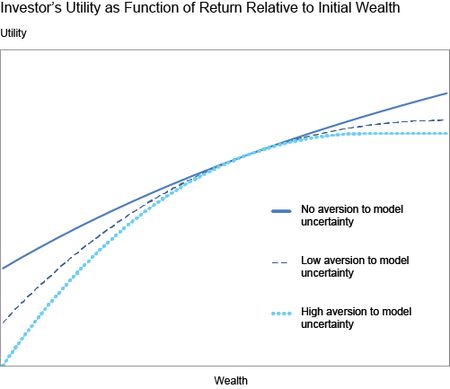 Since the uncertainty-averse investor assigns higher probabilities to losses on the illiquid asset, the good-deal bounds are wider in the presence of model uncertainty than in its absence. Intuitively, if we interpret the lower bound on the price as the bid submitted by a buyer, an uncertainty-averse investor fears that the security is less valuable than predicted, and submits a lower bid. Similarly, the upper bound can be interpreted as the ask price of a seller, who fears that the security is more valuable than predicted. We show, moreover, that increased model uncertainty leads to fundamentally different bounds than an increase in the maximum Sharpe ratio. While the maximum Sharpe ratio restriction corresponds to a bound on the volatility of returns, aversion to model uncertainty introduces a consideration for negative skewness into the computation of lower and upper bounds on asset valuations. The resulting valuations are thus more conservative than the traditional good-deal bounds. 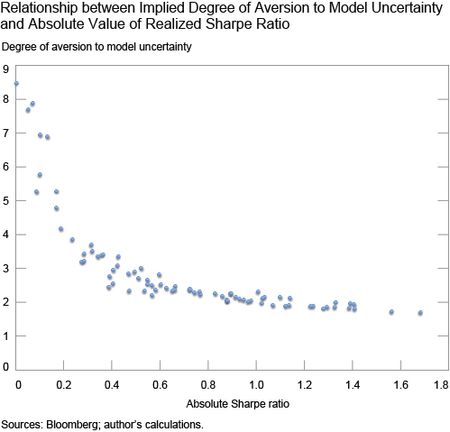 The aftermath of the global financial crisis has intensified political and regulatory scrutiny of the hedging and risk management of over-the-counter derivatives, with special emphasis placed on mark-to-market (or mark-to-model) valuations. We propose the use of good-deal bounds computed in the presence of model uncertainty as fair reservation prices for complex, illiquid securities. Explicitly incorporating model uncertainty into fair reservation values recognizes the difficulty of assigning probabilities to infrequent large adverse moves. The use of Sharpe ratios as a valuation criterion simplifies the comparison of valuations across institutions: Since the basis assets are traded, their prices are observable and differences in valuations must thus arise from differences in either the maximum admissible Sharpe ratios or in aversion to model uncertainty. Mark-to-market valuations of complex securities could thus be standardized across institutions by requiring that a standard set of basis assets is used in conjunction with a common maximum Sharpe ratio bound and a common confidence level for the Sharpe ratio on the basis assets. As the realized Sharpe ratio on the basis securities evolves over time, this would introduce time variation in the implied degree of aversion to model uncertainty and thus to mark-to-market valuations.