The U.S. Department of the Treasury (Treasury) auctioned its first floating-rate note (FRN) on January 29, 2014. With this auction, Treasury introduced the first new marketable debt instrument since Treasury inflation-protected securities (TIPS) in 1997. The new two-year FRN is a fixed-principal security with quarterly interest payments and interest rates indexed to the thirteen-week Treasury bill. In this post, we will discuss Treasury’s reasons for adopting an FRN as well as the existing FRN markets, expected FRN market participants, and results of the first FRN Treasury security auction.

Why Adopt an FRN?

Treasury generally seeks to minimize the long-run cost of issuing government debt. By adding a new product to the existing offering of marketable debt securities, Treasury expects that the investor base will expand, which will serve to lower Treasury’s borrowing cost. Recently, Treasury has also been extending the maturity of its debt portfolio as part of its strategy to control the overall cost of financing in a way that remains resilient during periods of market volatility and to lower the risk of a failed auction.


From an investor perspective, FRNs have less exposure to rising rates because of the frequent rate resets, and they pay interest more frequently than current coupon two-year securities. At the same time, FRNs may offer investors a slightly higher yield and fewer transaction costs than consistently rolling over a position in the thirteen-week bill, despite providing nearly identical cash flows.

Treasury first considered issuing FRNs, as well as TIPS, in 1994 as part of a plan to broaden its portfolio and investor base. In 1997, Treasury opted to introduce only TIPS and made no subsequent public mention of FRNs until 2011, when a Treasury Borrowing Advisory Committee (TBAC) presenter suggested that a floating-rate note could play a role in a maturity extension program. Since then, Treasury has worked over an extended period with the public and TBAC to design the eventual structure of the FRN, summarized in the timeline below. 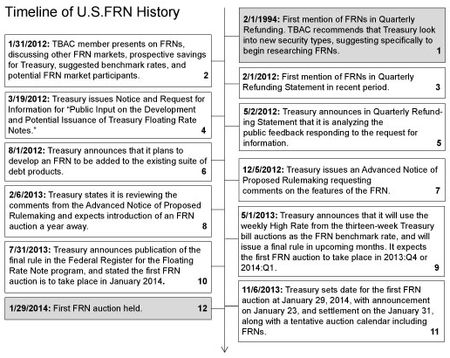 In December 2012, Treasury proposed an actual FRN security structure and requested comments on the design. While the commenters generally agreed on most parameters, there was disagreement on which benchmark rate to use. Treasury proposed using either the thirteen-week Treasury bill rate or a Treasury general collateral overnight repurchase agreement rate (GC rate). 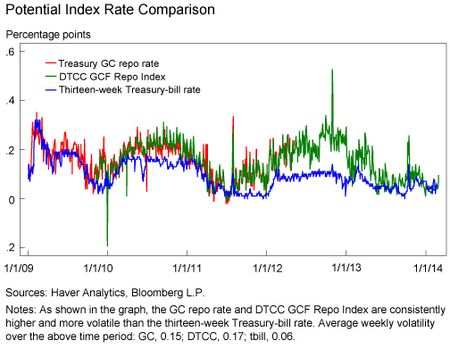 Most commenters supported the use of the GC rate and, more specifically, the Depository Trust & Clearing Corporation general collateral finance repurchasing agreement rate index (DTCC GCF Repo Index). They cited the daily rate changes, the greater nominal value traded in GC agreements, and the potential to attract new investors as advantages, while noting the potential conflict of interest and minimal cost savings in benchmarking a Treasury note to a Treasury bill rate as detractors from using the thirteen-week bill. However, others favored the thirteen-week Treasury bill, citing disadvantages with using the GC rate, including higher daily rates and volatility than bill markets, the relative newness of the GCF indexes, and the possibility of exposing Treasury’s financing costs to private-sector rate shocks. In the end, Treasury decided to benchmark the FRNs to the thirteen-week bill in light of its long history and high liquidity. The final structure is detailed in the table below, and the interest rate on the first FRN can be tracked in the following chart. 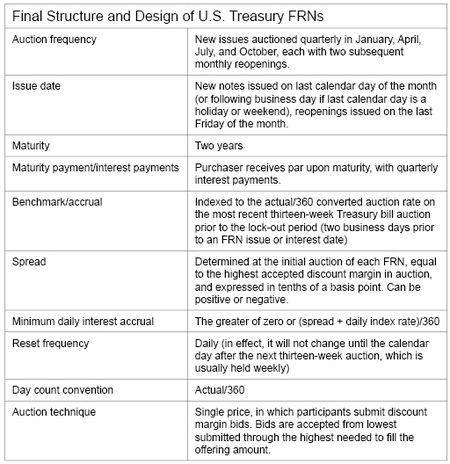 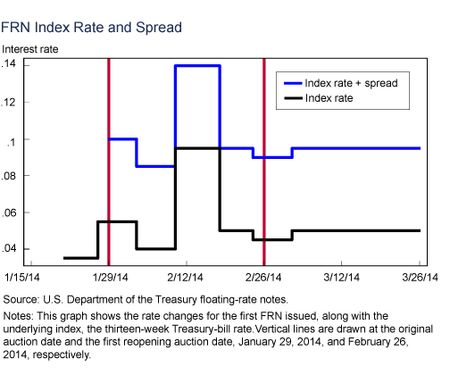 FRNs are commonly issued by the corporate sector as well as by government-sponsored entities (GSEs) such as Fannie Mae and Freddie Mac. A few foreign governments also issue FRNs, although they are much less common than fixed-rate or inflation-indexed notes. Japan and Italy both have long histories of issuing floating-rate securities, as detailed in the table below comparing U.S., Italian, and Japanese floating rate securities. Italy began issuing five- and seven-year floating rate Treasury Certificates (CCT) in 1991. Issuance was originally indexed to the six-month Ordinary Treasury Bill (BOT), but was switched to reference the six-month Euribor in 2010 (CCTeu). Japan entered the floating rate market in 2000 with a fifteen-year security, but began to phase out new issuance in 2008 as they systematically traded at a discount in the market. 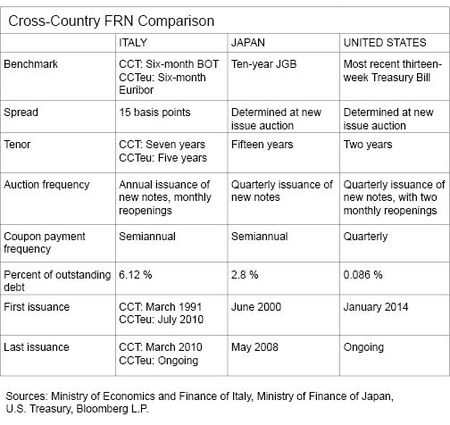 In the most general terms, a floating-rate note will attract note investors wishing to hedge against expected future interest rate increases. In order to effectively manage this risk, many investors look to shorter-term securities so as not to be locked into any one rate for too long, but this strategy increases rollover costs. Foreign central banks already manage portfolios with large shares of bills, and must roll over their holdings frequently. As such, they may prove to be active market participants. Money market funds may be attracted to even a modest yield pickup over Treasury bills, and although they are bound by their statutory weighted-average life of 120 days, most are currently well below this cap. Banks, on the other hand, are less likely users of FRNs, as they can currently leave excess reserves at the Federal Reserve and earn a return of 25 basis points, while FRN’s currently trade with a total return around 10 basis points (discount margin + current reference rate). However, Basel requirements may encourage banks to invest in short-duration, high-quality instruments such as FRNs when pricing conditions become more attractive. The following figure shows the investor class auction allotments of the most recently auctioned FRN, along with the average results from the previous five thirteen-week bills and two-year notes. The initial FRN auction on January 29, 2014, was well received as were the subsequent February and March reopenings. While the initial auction sizes of $15 billion, $13 billion, and $13 billion are modest, FRNs may well become an important component for Treasury offerings in the future. 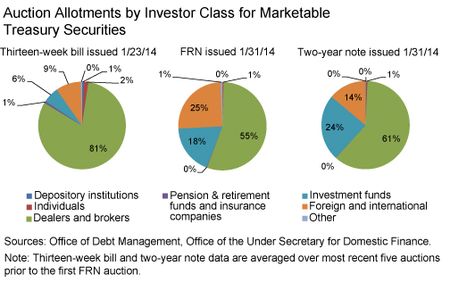 Luis Gonzalez is a senior associate in the Bank’s Markets Group.

Caitlin Gorback is a senior research analyst in the Federal Reserve Bank of New York’s Research and Statistics Group.

This is a very info page.I am very much interested this post.Every body should read this post.so This a great post.Thank you for posting.

Do you have a cusip of the actual FRN ? I would like to track in on Bloomberg. Thanks so much for this informative piece.

Very well done. I plan to use this in my course on Debt Capital Markets. Best –Suresh Sundaresan Columbia Business School