Lifting the Veil on the U.S. Bilateral Repo Market

To obtain these estimates, we exploit the fact that since April 2013, primary dealers report more details about the collateral backing their financing transactions. Before the most recent revisions to the Federal Reserve FR2004 reporting form (for government securities dealers), repo activity by primary dealers was aggregated across all collateral classes, which limits the usefulness of the data for analyzing trends in repo collateral.

To compare the repo numbers across the various data sources, we have to make some adjustments. First, the FR2004 data include only primary dealer activity, whereas the tri-party repo and GCF Repo® figures include repos by all dealers. To make these numbers comparable, we extrapolate from the tri-party repo activity and assume that primary dealers make up a little less than 80 percent of all repos in the United States. Second, using the public tri-party repo numbers, we calculate the amount of funds received by dealers (what is measured in the FR2004 data) by multiplying the total amount of collateral posted by 1 minus the median margin (for each collateral class). There are no margins in GCF Repo®, and so no adjustment is necessary. Third, the tri-party repo data is a mix of repo and pledge trades, whereas in the FR2004 data, pledges are reported in “other financing activity, securities lent.” Taking advantage of the fact that the value of “other financing activity, securities lent” is small relative to repo, in our analysis we use “total securities out” in FR2004 (“repo” plus “other financing activity, securities lent”). The ratio of repo to total securities out averages 86 percent from April 2013 to October 2014, and increases to 94 percent when we focus just on the U.S. Treasury asset class. As such, our estimates of bilateral repo, and especially of bilateral repo involving Treasury securities, will be only slightly overestimated. Fourth and finally, the timing of data releases across these data sources does not match up exactly—but the FR2004 data releases are typically no more than one or two days off from the publicly available tri-party repo and GCF Repo® data releases.

Unfortunately, the definitions and groupings of collateral differ across the data sources. Equities, for example, have a more inclusive definition in the tri-party repo data relative to the FR2004 data. Because of this, we aggregate the data up to Treasury securities including STRIPS and all other assets. With this approach, we obtain the following breakdown of the collateral for October 9, 2014. 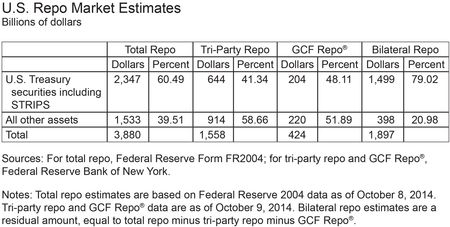 These estimated shares of collateral posted are not specific to October 9, 2014. As illustrated in the two charts below, Treasury securities’ share of total collateral posted is fairly stable over time for both bilateral and tri-party repo (although the data go back only to April 2013). Additionally, the amount of activity in bilateral repo relative to tri-party repo is stable over the sample period. 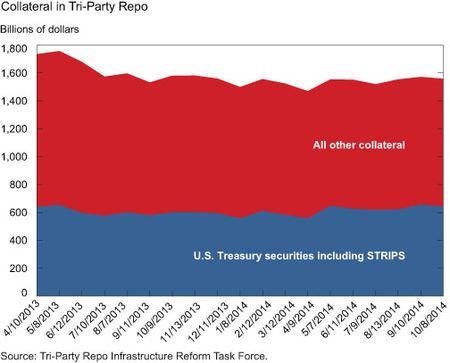 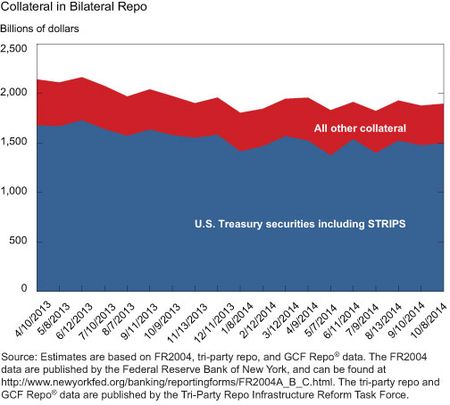 Another reason why tri-party repo trades are secured by a wider range of collateral, compared with bilateral repos, may be costs of settlement. The main feature of tri-party repo is that the back-office work of clearing and settling the repos is done by one of two clearing banks. In contrast, clearing and settling bilateral repos is the responsibility of the trading counterparties. U.S. Treasury and other securities, such as agency MBS, present starkly different costs along this dimension. According to statistics provided to the authors by the New York Fed, there were more than 1 million agency MBS outstanding (as measured by CUSIP) as of December 2012. In contrast, there were fewer than 350 U.S. Treasury securities outstanding. The large fixed costs necessary to clear and settle agency MBS may dissuade the acceptance of these securities as collateral for bilateral repo. For tri-party repo, however, the clearing banks can take ad
vantage of returns to scale and so offer to clear and settle a wide range of securities.

Our estimates provide more information on one of the more obscure parts of the U.S. financial system, the bilateral repo segment. The news is reassuring, because it suggests that the quality of the collateral posted in bilateral repos is high overall. Nevertheless, we would like to know a lot more about the repo market as a whole, and the bilateral segment in particular. For example, to what extent are tri-party repo and bilateral repo trades substitutes for one another, or do dealers use these two segments in a complementary manner? Of particular interest is the amount of bilateral repo that is interdealer, the extent to which bilateral repo trades reflect activity driven by demand for specific securities, and the velocity of securities among dealers within a day. Among the data that would help us better understand the U.S. repo market are the level of haircuts, the size, the interest rate, the counterparty, and the tenor of trades. Some of these data are available for the tri-party repo market, but not for the bilateral market. So while we are able to shine a little bit more light on the U.S. repo market, we continue to need more data to further our understanding of this critical market.

Adam Copeland is a senior financial economist in the Federal Reserve Bank of New York’s Research and Statistics Group.

Isaac Davis is a senior research analyst in the Bank’s Research and Statistics Group.

Eric LeSueur is a policy and market analysis associate in the Federal Reserve Bank of New York’s Markets Group.