The Japanese yen depreciated 30 percent from its peak in the fourth quarter of 2011 against its trading partners. This was expected to boost its exports as the lower yen makes Japanese goods more competitive on global markets. Instead, the volume of Japanese exports of goods actually fell by 0.6 percent over this same period, as can be seen in the chart below. Weaker external demand surely contributed to this poor export performance. Yet over the same period, U.S. goods exports grew by more than 6 percent, which suggests that other factors are also at play. In this post, we draw on our recent paper “Importers, Exporters, and Exchange Rate Disconnect” that highlights another channel to help explain these puzzling developments. In that study, we show that a key to understanding why there is low pass-through from exchange rates into export prices is that large exporters are also large importers, so they face offsetting exchange rate effects on their marginal costs. In the case of Japan, the connection between the yen and production costs has been made stronger since the country replaced nuclear power with imported fuels in the aftermath of the 2011 earthquake. 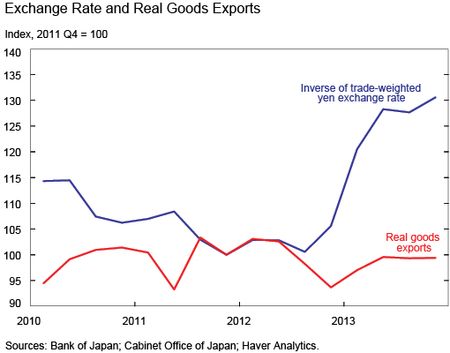 It has been well established that exchange rate changes are not fully passed through to export prices in foreign currency terms; that is, a 10 percent depreciation in the yen results in a less than a 10 percent fall in Japanese export prices and, thus, a relatively smaller boost to export quantities in response to a depreciation. This low pass-through has generally been attributed to “local currency pricing” and to “pricing-to-market.” If firms choose to invoice their exports in foreign currency terms, then prices are “sticky” in that currency, so exchange rate changes mechanically translate into changes in the exporter’s markup, with a weaker yen increasing the profit margin of exporters. A local currency pricing study shows that Japanese exporters to the United States generally invoice in U.S. dollars. In addition, exporting firms often tend to adjust their markups in response to an exchange rate depreciation, even if they do not invoice in the foreign currency, with the size of this adjustment depending on demand conditions in each export market.


The new finding in our study is that the incomplete pass-through is the most pronounced for exporters with large import shares—each additional 10 percentage points of imports in total variable costs reduces exchange rate pass-through by over 6 percentage points. We also show that large exporters are import-intensive, have high foreign market shares, set high markups, and actively move them in response to changes in their marginal costs. Thus, the prices of the largest firms, which account for a disproportionate share of trade, are insulated from exchange rate movements both through the hedging effect of imported inputs and through active offsetting markup adjustment in response to cost shocks.


Our research uses highly disaggregated data for Belgian firms, which unfortunately are unavailable for Japan. However, the intuition from that study applies more widely. The fact that large exporters are also large importers appears prevalent across many countries. Although we do not have the data for Japan to see whether larger exporters are also the larger importers and whether that import share has been growing, the chart below shows that imports of fuel—an intermediate input into the production process—have been growing rapidly since the Japanese earthquake in 2011 led to the closure of all nuclear plants in Japan. Fuel imports spiked immediately after the earthquake and have been steadily rising from 4.4 percent of GDP to 5.9 percent. 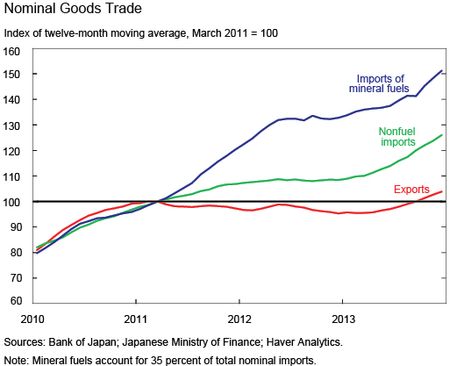 Other imported inputs could well be growing, too, but they are more difficult to identify in the aggregate data. The point is that the yen depreciation drives up the marginal costs of Japanese exporters that import their intermediate inputs and therefore results in a smaller share of the depreciation being passed on into their export prices in foreign currency terms. The magnitude of the price adjustment depends on how important imported intermediate inputs are in a firm’s total costs. In the case of Japan, the replacement of nuclear power with imported fuels works to increase the impact of the weaker yen on the production costs of exporters.

Jozef Konings is professor of economics at University of Leuven.

Added to the findings should be that since Japanese firms have experienced an increase in input costs, passing on the higher prices in their international markets have prove tough. This could be because Japanese firms notably excluding the auto manufacturers lack the market power and the translating pricing power to effectively hike prices without losing more market share. This can be seen especially in how Panasonic is still struggling to turn a decent profit despite yen weakness.

When the present manufacturing industry of Japan exports it to direct U.S.A. from the countries of “China, Taiwan” Southeast Asia, I think that it is not counted the export from Japan. In addition, will it be counted when in-house production parts made in Japan are exported as a product of other countries from “Korea, Southeast Asia”?