« Crisis Chronicles: The Crisis of 1816, the Year without a Summer, and Sunspot Equilibria | Main | Demographic Trends and Growth in Japan and the United States »

For the three periods we consider, the chart below compares how low volatilities are across the following asset classes: two-year Treasury securities, ten-year Treasury securities, and the S&P 500 index. The bars represent the percentiles of historical ranges. For instance, the S&P 500 value for July 2014 is 7. That means only 7 percent of historical monthly observations, which we took back to 1994, have had a lower volatility. For the two-year interest rate, only 8 percent of past observations are lower. For the ten-year interest rate, less than 1 percent are lower. We focus on May 2007, May 2013, and July 2014 because these periods were low points for volatility across asset classes. Although volatilities are a bit higher today, they remain near their long-term lows. And while volatilities in the last few months are similar to those in May 2013 and 2007, there are important differences in the underlying drivers that can help us understand the recent market environment. 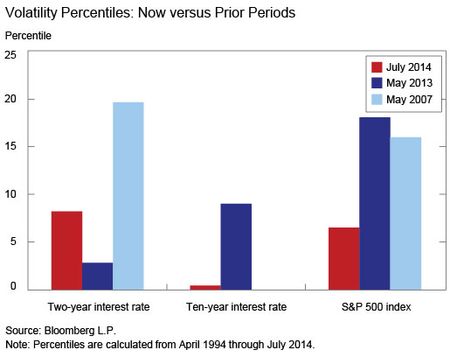 Before we get into those differences, we had to think long and hard to answer the question: What should drive volatility? To come up with possible explanations, we asked economists and hedge fund managers, combed the academic literature, and scrutinized the popular press. For example, economists generally believe the strength of economic growth and level of inflation may influence volatility. Recent economic research has focused on the dispersion of forecasts around various economic and financial market variables, and this may also be an important driver of market volatility. Lower forecast dispersion, as well as stronger growth and lower inflation, should be associated with lower volatility. The press has also been discussing the current stance of monetary policy, with low interest rates and large-scale asset purchases by the Federal Reserve, as a factor in explaining the current levels of volatility.

Clearly, many variables might help explain volatility dynamics. For our regression analysis, we start with a wide range of potential variables that might matter, and then sequentially narrow our broad list by removing the least important variable, one at a time (in statistical terms, the least significant variable in explaining volatilities). The chart below shows the five most important variables (for the wonks, here are further details on estimation approach and regression results). The bars represent the differences of those variables from their long-run means, measured as a number of standard deviations. The three bars for each variable correspond to three different times: July 2014, May 2013, and May 2007.

Broadly, our results confirm what has been reported in the press—namely that reduced uncertainty regarding the policy outlook, proxied by the dispersion of the three-month Treasury-bill forecast, as well as low levels of financial stress, are contributing to the recent low levels of volatility. Also, low interest rates tend to mute volatility, with the ten-year Treasury yield low by historical standards. These three variables were similarly low last May, contributing to the interpretation that current underlying fundamentals resemble those from a year ago. When thinking about what was happening back in 2007, there are some substantial differences. Uncertainty regarding short-term policy was higher, with survey forecast dispersion for the three-month Treasury bill being substantially greater than it was today or last year. Financial stress, as represented by the TED spread (the difference between the interest rates on interbank loans and Treasury bills), and the ten-year Treasury note yield were also higher. In contrast, households seemed much more certain in their outlook, based on the dispersion of forecasts from household surveys. This measure was substantially lower prior to the financial crisis, but is currently near average, as it was last May. 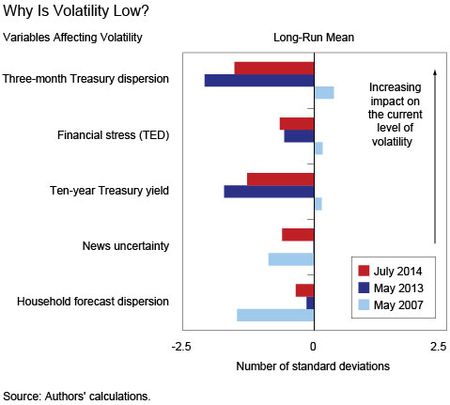 During times of relative market calm, like today, it could be that low financial market volatility is pushing these fundamental drivers lower, rather than the other way around. This note does not specifically address whether volatility is affecting or is being affected by these drivers. Rather, it approaches the links between these potential fundamental factors and volatility as instructive in providing more historical context when approaching the question of why volatility may be low now versus in the past.

Juan Navarro-Staicos is a financial markets analyst in the Bank’s Markets Group.

Carlo Rosa is an economist in the Bank’s Markets Group.