« How Sensitive Is Housing Demand to Down Payment Requirements and Mortgage Rates? | Main | A Discussion of Thomas Piketty’s Capital in the Twenty-First Century: By How Much Is r Greater than g? »

Historical Echoes: The Year of the . . . Pigeon?

Correction: In the original version of this post, a quote from the Museum of American Finance website stated that the telegraph arrived in the 1950s. This actually took place in the 1850s. The museum has now revised its site to reflect the correct year and we have revised the relevant text in our post. We regret the error. 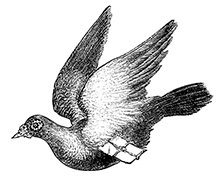 One could say that Sesame Street character Bert’s extreme interest in paper clips is misguided, but his obsession with pigeons? Maybe not so much. Pigeons have played a role in financial history, with one such role described by Tony Chen during his walking tour of the Hutong district in Beijing. When his group of tourists reaches the Qianshi hutong (see video), he gives an almost unbelievable account of pigeons, exchange rates, and bank robbers during the Ming dynasty, as reported in Time Out Beijing:

This is where the central bank from the Ming dynasty was located as well as the place the rate of exchange was set every day. Tour and hiking guide Tony Chen, says this information was announced by tying pieces of paper with the rate written on the[m]to the feet of pigeons that were then released into the air to spread the world [sic]. Qianshi hutong is Beijing’s narrowest at 44 centimetres. Only one person can pass through at a time, a safety feature devised by the bank to deter gangs of robbers. The original bank building still stands.

Although one might question here whether the central bank mentioned was really to be considered a “central bank” in our current understanding of the term, nevertheless, the idea of pigeons flying around with exchange rate information tied to them is perhaps not so outlandish. The online text to accompany a 2012 exhibit at the Museum of American Finance (yes, the same museum that has been hosting “The Fed at 100”), called “Stock Trading Then and Now,” states that:

Before the telegraph arrived in the 1850s, brokers would place agents on top of hills and buildings between Philadelphia and New York City with signal flags and telescopes to rely [sic] stock prices between cities in about half-an-hour.  Homing pigeons were also used to transmit information.

A bit more corroboration on the likelihood of Tony Chen being right about those pigeons is a 2000 article from the New York Times about the wonderful accomplishments of pigeons during the Ming dynasty and later in history:

Raising pigeons is a practice that dates from the Ming dynasty, when they were used by armies as messengers. (There is a military-run pigeon farm today in Kunming in southern Yunnan Province where pigeons are reportedly trained to fly information into difficult-to-reach mountainous areas.)

“We have a long history of pigeon culture,” said Wang Shixiang, a retired breeder.

By the 17th century there were acrobatic pigeons doing air shows. The feet of pigeons were adorned with elaborately carved bamboo whistles, which piped music as they flew. The tradition continues in Beijing today.

So perhaps Bert is justified in his love of pigeons and loyalty to the fictional TV show “The Wonderful World of Pigeons.”