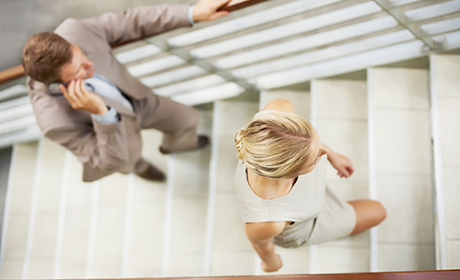 Our research focuses on the top five executives by title in public companies (chair/chief executive officer (CEO), vice chair, president, chief financial officer, and chief operating officer) in Standard and Poor’s ExecuComp database between 1992 and 2005. Only 3.2 percent of people in these roles are women.

Female executives receive a lower share of incentive pay in total compensation than males. This difference accounts for 93 percent of the unconditional gender gap in total pay. 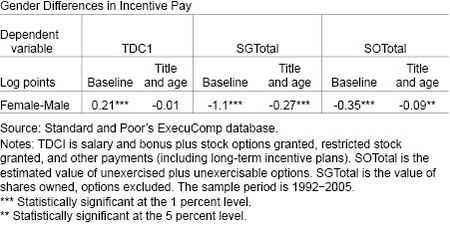 Are these gender differences in compensation efficient?

Surveys of professionals and executives, time-use studies, and experimental and psychological studies suggest that:

Based on the efficient paradigm of the pay-setting process, these gender differences in barriers to career advancement and preferences are consistent with Facts 1 and 2, but they would imply lower performance for firms headed by females, an outcome for which we find no evidence in our data. Moreover, this framework cannot explain Fact 3.

Stefania Albanesi
is a research officer in the Federal Reserve Bank of New York’s Research and Statistics Group.

Maria Prados is an associate economist at University of Southern California’s Center for Economic and Social Research.

As a professional woman with children my experience has been that working woman hesitate to go for the big job or change jobs at all because their need/desire for flexibility in the workplace is so important to them. Many of my friends and colleagues have said they would forego a pay raise for the peace of mind that they can leave when they need to take care of their family or alter their work schedule. Often times this flexibility has been created because they have worked so long at once place and don’t feel they can negotiate this at a new place of work. Many well educated, talented woman feel left out of opportunities to contribute their skills because of their commitment to being present parents in addition to professionals.