« The Importance of Commodity Prices in Understanding U.S. Import Prices and Inflation | Main | Crisis Chronicles: The Cotton Famine of 1862-63 and the U.S. One-Dollar Note » 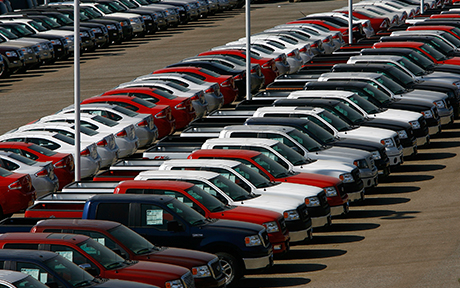 Today, the New York Fed announced that household debt increased by a robust $212 billion in the third quarter of 2015. Both mortgage and auto loan originations increased, as auto originations reached a ten-year high and new mortgage lending appears to have finally recovered from the very low levels seen in the past year. This quarter, we’re introducing an improved estimate of auto loan originations, some new charts, and some fresh data on the auto loan market. The Quarterly Report on Household Debt and Credit and this analysis use our Consumer Credit Panel data, which is itself based on Equifax credit data.

In general, our method of calculating data series for our Quarterly Report is simple—we aggregate variables from our 5 percent sample of credit reports; any adjustments we make are well documented. Because we do not observe auto loan originations directly, we impute them using an algorithm to identify newly originated balances. Our original approach was contingent on an increase in number of accounts, but would tend to underestimate originations in cases in which account numbers don’t increase—as in back-to-back leases, for example.

With our new, more accurate approach, we’re able to find new loans even when there isn’t an increase in accounts. We are releasing a revised historical series that uses our new approach. (Note that only auto loan originations, not balances, are affected by this revision. Our aggregate outstanding balance figures remain unchanged.) The new approach generates an upward shift in the volume of newly originated auto loans by 25 to 30 percent, as shown in the chart below. Although the level is higher, the pattern of fluctuations is largely unchanged. Note also that originations, which reached $156.8 billion in the third quarter, are at the highest level in a decade. In part because of the growth and sheer size of this market, regulators and even some banks have raised concerns about the underlying risks. 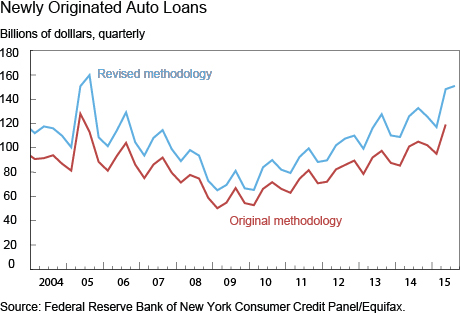 To help monitor such risks, we’re introducing two new regular charts to the Quarterly Report that provide additional detail on auto loan borrowers’ credit scores. Our first new chart, shown below, plots the absolute level of originations by score. Particularly notable is that subprime originations (defined here as loans to borrowers with scores below 620), jumped to nearly $40 billion in the second quarter, and only dipped slightly in the third quarter. Last year we noted that subprime auto lending was growing, but remained below pre-crisis levels. With the surge in the second quarter, the total number of subprime originations has since reached a ten-year, pre-crisis high, only surpassed by the unique periods in 2005 that were associated with “employee pricing” promotions and record sales for the auto manufacturers. 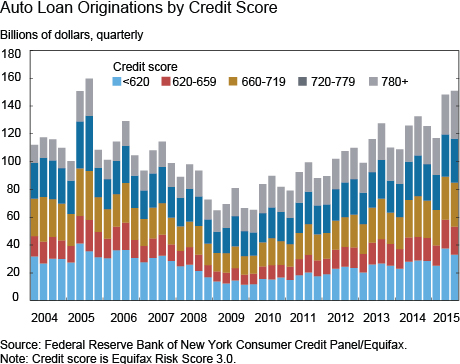 Although these findings may sound worrisome, we caution that our data are not adjusted for inflation—and the prices of new and used cars have increased by about 6 percent in the past ten years, so although the level of subprime loans is comparable to that from a decade ago, it is likely lower in real terms.

Our second new chart shows the distribution of credit scores of auto loan borrowers at origination (see below). Although there appears to have been some loosening of credit standards since 2010, the change has not been dramatic. 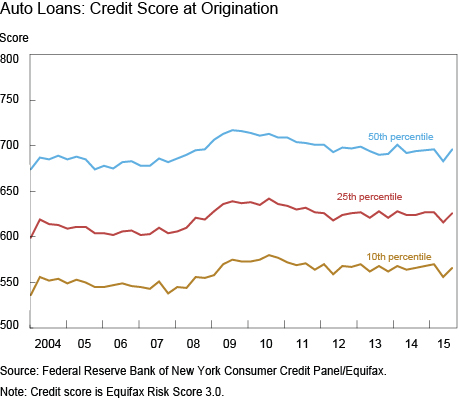 As we noted in our blog post last year, subprime auto lending is concentrated among auto finance companies. The steady upward slope of the light blue line in the left panel below shows that the trends we reported on then have continued. Subprime lending by auto finance companies has now essentially matched its previous highs in nominal terms. 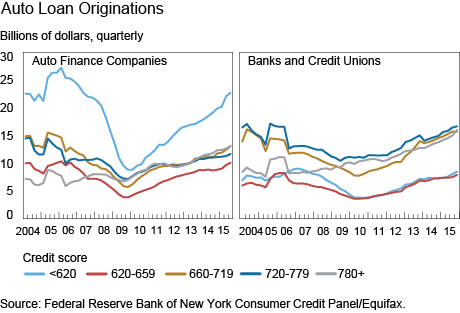 Our report also shows that overall delinquency rates on auto loans have been stable, with the 90-plus-day delinquency rate of 3.4 percent in the third quarter, markedly improved from the 5 percent rate that prevailed five years ago. Because the composition of borrowers differs so much between the two types of auto lenders, their delinquency rates and trends also differ, as shown in the chart below. There has recently been a modest reversal of the downward trend in delinquency rates since 2010 on auto finance company loans, while bank auto loan delinquency rates continue to decline.

The continued growth in auto lending, subprime lending in particular, is a topic that we’ve monitored closely over the past few years, and we’re just now seeing some increase in delinquency rates on loans made by auto finance companies. Because there are a large number of subprime borrowers in this sector, these borrowers may be more sensitive to developments in the labor market, and the increases in the outstanding balances of these borrowers may pose some risks. That said, any comparison with the subprime mortgage market of the 2000s that led to the crisis should note that the volume of subprime mortgages outstanding in 2007 was nearly four times the volume of subprime auto loans outstanding today ($250 billion).