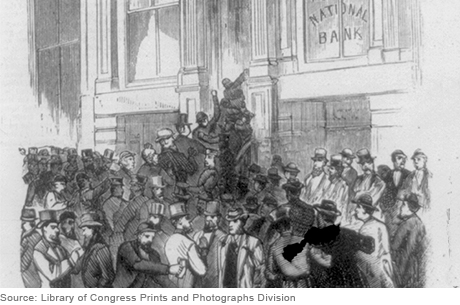 Formed in 1861, Jay Cooke & Co. was a bank that achieved fame and fortune by aggressively marketing government bonds during the Civil War. By 1869, it had expanded into financing railroads, specifically the Northern Pacific Railway that would link Duluth to Seattle. The line would be part of a transcontinental system that would carry goods from the Pacific Coast to the Great Lakes and then to Europe. Unfortunately, the project was plagued by mismanagement and construction challenges, and a growing funding gap made more challenging by the Credit Mobilier scandal.

The panic led to bank runs and bank failures, followed by commercial bankruptcies and unemployment so severe that the downturn was called the Great Depression at the time. It lasted so long, more than five years, that it is now known as the Long Depression. Those were miserable years for many, including veterans:

The length of the Long Depression might reflect that it came at the end of an innovation cycle.

Congress initially responded to the collapse by trying to ease monetary conditions. A bill to add liquidity to financial markets passed Congress in March 1874, but was unexpectedly vetoed by President Ulysses S. Grant.

Congress. . . called for the infusion of $400 million Greenbacks into circulation and the addition of $100 million into the nation’s money supply. . . . Grant deliberated on the measure and initially wrote a message to Congress supportive of S.B. 617. The more he thought about it, however, the more he came to view the bill as an inflationary threat to the nation’s long-term credit. . . . In his veto message, Grant feared that passage of the bill would lead to future efforts to print even more inflationary greenbacks (“President Ulysses S. Grant and the Panic of 1873”).

The hard money view, with advocates in both political parties, moved Congress in the opposite direction of easier money with the passage of the Resumption Act in January 1875. The act required the Treasury to retire Greenbacks (currency not backed by gold) and committed the government to reinstate the gold standard in four years.

I always thought the well established story of the long depression would be that it was mainly caused by the “crime of 1873”, i.e. the completely unexpected end of bimetallism, which was the equivalent in these days of what we would today call a massive monetary policy tightening.