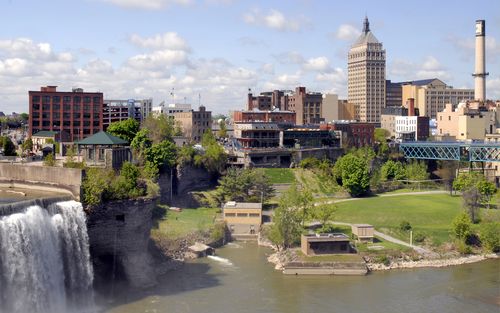 In 2015, upstate New York looked to be having its strongest job growth in years. Employment was estimated to be growing at around one percent—below the national pace, but twice the region’s trend growth rate since the end of the Great Recession. Buffalo, in particular, looked to be gaining significant numbers of construction and manufacturing jobs for the first time in decades, pushing it to its highest job growth since the late 1990s. Unfortunately, the good news was wrong. Annual benchmark revisions to New York State’s employment data released in early March cut upstate’s growth rate in half, indicating that the pickup in the pace of the region’s job growth never really happened.

Regional job totals are at first estimated based on a sample of employers. Then each year in March, the U.S. Department of Labor releases benchmark revisions to these estimates using a census of employers derived from unemployment insurance tax reports. As shown in the chart below, job growth in upstate New York appeared to be accelerating beginning in mid-2014 according to preliminary estimates, rising to a more than one percent annual growth rate in 2015, double the roughly 0.5 percent pace seen throughout much of the recovery, and the fastest job growth in over a decade. However, once the data were revised, this accelerated pace vanished, revealing that growth in upstate New York held steady at about 0.5 percent. 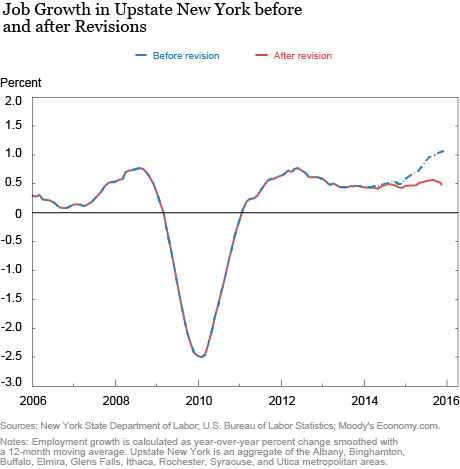 Most of this difference can be traced to an overestimation of jobs in two industries that were not growing as strongly as originally thought: education and health care (overestimated by more than 9,000 jobs), and professional and business services (overestimated by roughly 4,600 jobs). On the upside, upstate New York’s manufacturing sector originally looked like it had suffered a small loss in 2015, but instead it gained nearly 2,000 jobs. 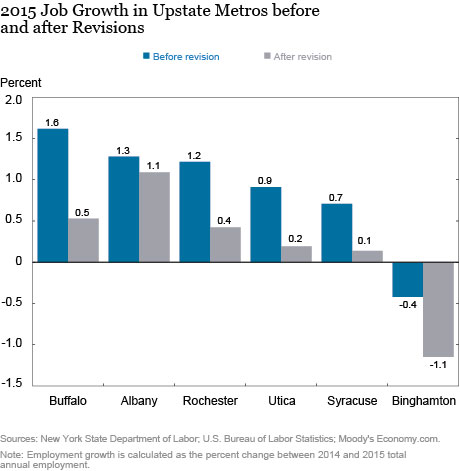 Among the six largest metro areas in upstate New York, Buffalo saw its job growth clipped the most. With more than a full percentage point drop, its job growth was slashed by more than two-thirds, from 1.6 percent to just 0.5 percent, its slowest job growth since 2010. Construction jobs before the revisions had appeared to be growing off the charts, with a 12 percent gain, according to preliminary estimates. But instead of 2,500 construction jobs, it turned out that there were only 500 such jobs created last year. Education and health jobs also appeared to be growing strongly, but gains were revised down from 2,300 to just 400. Buffalo’s finance sector posted the largest gains for the year with about 1,000 jobs.

The Albany metro area had the smallest downward revision among the upstate metros, with job growth revised down just 0.2 percentage points. At 1.1 percent, Albany turned out to have the strongest job growth of any upstate metro last year. The metro area’s manufacturing sector was particularly solid, adding about 1,300 jobs, the best of any upstate metro area. There were also sturdy gains of around 1,000 jobs each in the professional and business services, leisure and hospitality, and construction industries, though the education and health care sector, which originally appeared to have added nearly 3,000 jobs, only added a few hundred.

Job growth in Rochester looked to be on the upswing, but post-revision data indicate that growth remains sluggish. The job growth rate was revised down 0.8 percentage points to 0.4 percent. The Rochester metro area experienced good gains in professional and business services, and to a lesser extent education and health care jobs (which were revised down substantially from their original estimates), but most other industries eked out only very small gains.

At 0.9 percent before the revisions, job growth finally appeared to be positive in the Utica metro area for the first time since the Great Recession. However, with the figure revised down to just 0.2 percent, the metro area’s job base now looks flat. Small gains in industries such as education and health and leisure and hospitality were offset by equally small losses in retail trade, construction, and government.

The Syracuse metro area appeared to be gaining jobs at a slightly faster pace in 2015 than in the years following the Great Recession. However, the data revisions essentially wiped away these small gains, suggesting the area’s job base was little changed. While the metro’s leisure and hospitality industry gained about 1,000 jobs last year, these increases were offset by losses in many key sectors, including professional and business services and education and health.

The Binghamton economy has been struggling for a number of years, in large part due to a continued long-term decline in its manufacturing sector. In 2015, Binghamton was the only major metro area in upstate New York to experience a net decline in jobs. The revisions indicate that there were nearly three times as many job losses last year as had been previously estimated. While the manufacturing industry experienced only a small decline, losses were more significant in the professional and business services and information sectors, as well as in government.

This year’s annual benchmark revisions to upstate New York State’s employment data were larger than expected and generally showed that the region continued to grow only modestly in 2015. Though disappointing, not all of the news was bad: in particular, buoyed by Albany’s relatively strong performance, upstate New York’s manufacturing sector held its own last year, adding nearly 2,000 jobs. Moreover, the region’s leisure and hospitality sector added more than 3,000 jobs, well above initial estimates. And, finally, though job growth was not as strong as previously thought, the upstate region continued to add a good number of jobs in the education and health and professional and business services sectors. So, while it turned out that the pace of job growth did not pick up in upstate New York, on the whole, growth remains slow but steady.