As usual, we wish to remind our readers that the DSGE model forecast is not an official New York Fed forecast, but only an input to the Research staff’s overall forecasting process. For those who are interested, this earlier blog post provides some details on the FRBNY DSGE model, together with the code used to estimate it in both the Matlab and Julia programming languages.

The top panel in the chart below presents quarter-to-quarter annualized forecasts for real GDP growth and core PCE inflation over the 2016:Q2 to 2017:Q4 horizon. These forecasts were produced on May 3 using data released through 2016:Q1, augmented with the FRBNY staff forecasts for GDP growth and core PCE inflation for 2016:Q2 and with observations of selected financial variables (the federal funds rate, the ten-year Treasury yield, and the spread between Baa corporate bonds and ten-year Treasury yields) based on 2016:Q2 averages. The added observations incorporate valuable up-to-date information about the current quarter. In the chart, the black line represents released data, the red line is the forecast, and the shaded areas mark the uncertainty associated with our forecasts at 50, 60, 70, 80, and 90 percent probability intervals. Output growth and inflation are expressed in quarter-to-quarter percentage annualized rates. 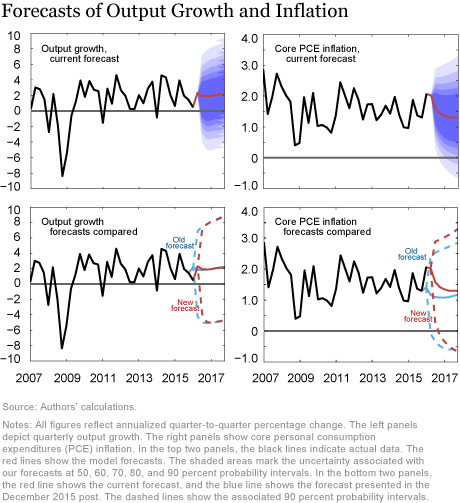 The FRBNY DSGE model projects output growth to be 1.6 percent in 2016 (Q4/Q4) and 2.1 percent in 2017. This forecasted path is remarkably close to that of our December post, as can also be seen in the bottom left panel of the chart. The model interprets the lower reading of GDP growth relative to the forecast reported in December as the result of the widening of credit spreads in the first months of the year. While spreads have narrowed recently, financial conditions remain tight compared with historical standards, preventing a rapid recovery in economic activity. This is reflected in the persistently negative “output gap,” where output gap is defined as the percentage deviation of actual output from the level that would prevail in the absence of nominal rigidities and markup shocks (the “natural” output). As shown in the chart below, the model predicts that the economy will continue to display a significant amount of economic slack throughout the forecast horizon. Despite the large degree of uncertainty surrounding our estimate of the output gap, a scenario of full resource utilization (in other words, zero output gap) is outside the 68 percent probability intervals through the end of 2017. In fact, the forecast distribution indicates that the risks of a wider output gap are significantly higher than the likelihood of closing the gap. This asymmetry in risks to the output gap forecast reflects the constraint on policy imposed by the zero lower bound. 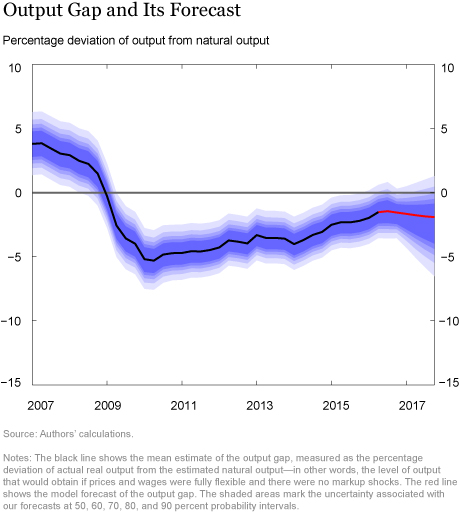 Turning to inflation, the broad outlines of the forecasts are also little changed relative to our December post. The significant uptick in core PCE inflation in 2016:Q1 moved the core inflation outlook up to 1.8 percent (Q4/Q4) in 2016. However, the model interprets the factors behind this pickup as largely temporary and expects that fairly weak “fundamentals,” such as wage growth and the evolution of firms’ marginal costs, will bring down core inflation to 1.3 percent (Q4/Q4) in 2017. Uncertainty around the inflation forecasts is significant, but it is worth noting that the 68 percent probability intervals now include the FOMC’s 2 percent inflation target in 2016, compared with the upper range of 1.7 percent in the projections discussed in the December post.

In summary, the FRBNY DSGE model interprets the disappointing GDP growth in the first quarter as a temporary setback and predicts steady but moderate economic growth in the medium term. Similarly, the model does not forecast that the recent strength of inflation will persist, as the slow closing of the slack in economic resources implies a very gradual return of inflation to the FOMC objective. Consistent with these projections, and broadly in line with financial market expectations, the model continues to predict that the federal funds rate will return slowly to its long-run level.