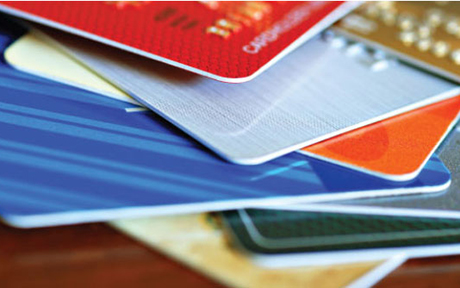 The Energy Cycle and Household Debt: A First Look

Between 2004 and 2013, the United States surpassed Saudi Arabia and Russia to become the world’s largest producer of oil, but in 2014, oil prices fell sharply, causing a decline in oil and gas extraction employment. The chart below depicts the number of active oil rigs in blue. We see a relatively low number until about 2010, when the American oil boom begins. The number of rigs rises sharply until the end of 2014, yet then drops precipitously. The red line depicts the number of employees in oil and gas extraction (NAICS code 211); its dynamics correspond with the oil rig counts, although employment appears to respond somewhat more gradually. Although overall employment has been quite strong in the United States, jobs in oil and gas extraction are concentrated in a small number of geographies. This concentration creates relatively well-defined areas whose local economies are experiencing a sudden downturn after a boom, while the rest of the United States has, on average, experienced relatively steady improvements in employment. 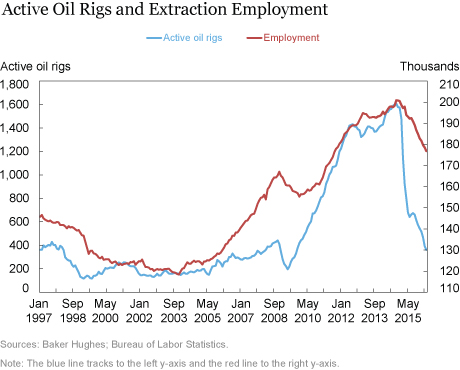 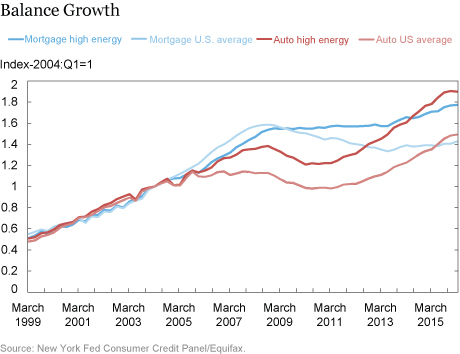 It’s also interesting to look at delinquency rates. Has the recent reversal of fortune in these areas been reflected in an uptick in late payments? In the chart below, we look at serious (90+ day) delinquency rates in energy-producing counties relative to the United States as a whole. Let’s start with mortgages. It’s easy to see a difference between the oil counties and the rest of the United States in every quarter. Before the financial crisis, mortgage delinquencies in these small, rural counties exceeded the national average, but the pattern reversed after 2006. The housing bust had much less pronounced effects on delinquencies in the oil patch, but toward the end of the period we see the difference shrinking as delinquencies in the energy counties tick up. Auto loan delinquency rates were very similar in energy-producing counties to the U.S. average between 1999 and 2007. Beginning with the financial crisis, though, the energy counties began to perform persistently better. Since mid-2014, though, energy-county delinquencies have risen sharply in both absolute and relative terms. While these effects are relevant in these counties, it’s important to remember that the affected areas are quite small relative to the nation. 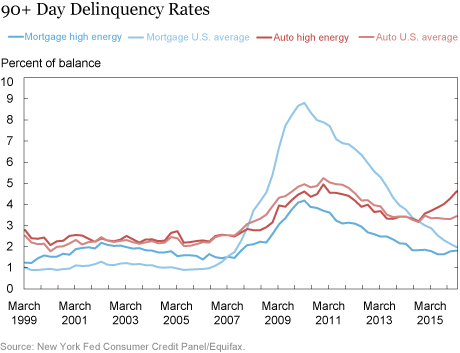 Thanks, John, for the question (and for the kind words). We used the more aggregated “Natural Resources and Mining” industry because we didn’t have 3-digit NAICS employment available for all counties. (Many of these counties are quite small, and thus subject to data censoring.) As a robustness check we looked for counties with high (more on what we mean by “high” in a moment) mining employment in just those states that have significant oil and gas production. These results were quite similar to what we reported in the blog. We chose an employment share of 6% based on exactly what you reference: since total U.S. Natural Resources and Mining employment was, at its peak in 2014, about 0.6% of employment, we are using those counties with a location quotient of 10. That is, they have ten times the concentration of such workers as the nation as a whole. Of course, this is somewhat arbitrary: any location quotient over 1.0 could be taken to imply some degree of exporting, but we are intentionally focusing on the counties that are really heavily dependent on mining.

In addition to my previous post, I have another question if that’s alright. Is there a particular reason for using the 6% employment cut-off? Would you consider that percentage to be a better indicator than an employment quotient? Finally, how did you arrive at 6% rather than 5% or 7.5%? Thank you for your time. I’ve been visiting your website often and I appreciate your work.

Hello, I’ve been analyzing the performance of auto companies in counties that I have determined as “oil and gas” affected. I did a lot of research into choosing the factors for those counties and was wondering why you chose to use only NAICS 21, even though it includes all natural resource mining? Oil and gas extraction (211) makes up less than half the employment of support activities for mining (213). Also, oil and gas extraction employment is much less volatile than support activities employment. I decided to use NAICS 211, 213, 324 (petroleum and coal products manufacturing), 486 (Pipeline transportation). Although pipeline employment rises over the time period, it only makes up 6% of national oil and gas employment in my data and I felt it important to include in order to better identify potentially affected counties.