« Historical Echoes: The Bank That Never Existed, or You Say ‘Immigrant’ and I Say ‘Emigrant’ | Main | The Need for Very Low Interest Rates in an Era of Subdued Investment Spending » 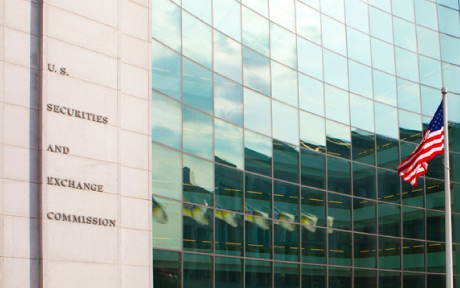 On October 14, 2016, amendments to Securities and Exchange Commission (SEC) rule 2a-7, which governs money market mutual funds (MMFs), went into effect. The changes are designed to reduce MMFs’ susceptibility to destabilizing runs and contain two principal requirements. First, institutional prime and muni funds—but not retail or government funds—must now compute their net asset values (NAVs) using market-based factors, thereby abandoning the fixed NAV that had been a hallmark of the MMF industry. Second, all prime and muni funds must adopt a system of gates and fees on redemptions, which can be imposed under certain stress scenarios. This post studies the effect of the amendments on the size and composition of the MMF industry and, in particular, whether MMF investors shifted their assets from prime and muni funds toward government funds in anticipation of the tighter regulatory regime.


Shift to Government Funds
Using month-end data from public regulatory filings by MMFs from January to November 2016 (the SEC Form N-MFP), we show that the relative size of prime and muni versus government funds has changed dramatically even as overall total net assets (TNA) of the industry have been roughly stable. Indeed, as the chart and table below show, TNA in the prime and muni segment of the MMF industry have fallen by more than half, with TNA declining $1.120 trillion, whereas those in the government segment have increased by $1.032 trillion; as a result, the share of overall TNA invested in government funds has soared in the space of ten months, from 41 percent to 76 percent. 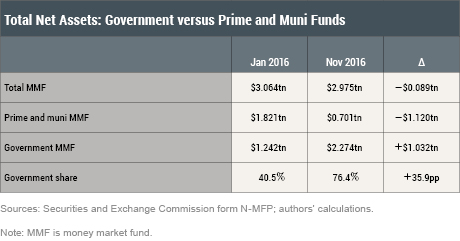 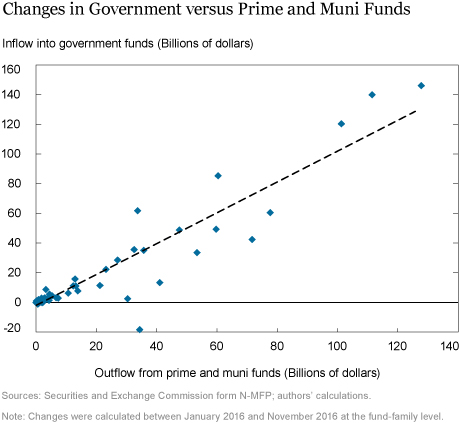 Shifts to Higher-Yield Government Funds
Investors in the prime and muni segment of the MMF industry are likely to have a higher appetite for yield and a higher tolerance for risk than government MMF investors. One may expect that, given their risk preferences, those investors who moved their assets to government funds would concentrate on the segment of the government fund industry that provides a higher yield. The data support this hypothesis.

As the chart and table below show, the Treasury share of the MMF industry has remained roughly flat; in contrast, the share of agency MMFs has increased from 24.4 percent of the overall industry to 55.4 percent. In other words, investors have moved to the segment of the government MMF industry that is closer (in terms of yield) to the prime and muni segment. They have likely done so in order to avoid the potential for liquidity gates and fees, and in the case of institutional investors, to keep the desirable feature of a fixed NAV, while at the same time maximizing the yield from their MMF investment. 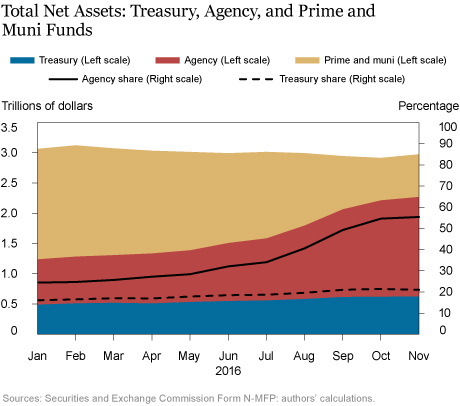 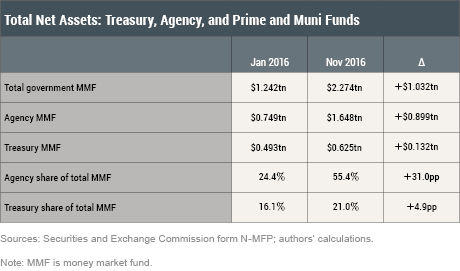 Summing Up
Overall, investors’ shift from prime and muni funds to government—and, in particular, agency—funds means that a large segment of the industry still operates under a stable NAV (and therefore is, in principle, vulnerable to runs). Yet, financial institutions tend to suffer runs when their investments have gone, or are perceived to have gone, sour (as was the case in 2008, after Lehman Brothers’ bankruptcy); indeed, government funds, which invest in safer assets than prime funds, did not experience any run in 2008. Since the new regulations have resulted in a very large shift of assets into relatively safe government funds, the SEC’s reforms have made runs on MMFs less likely and the industry itself more resilient.


Catherine Chen is a former policy and market analysis associate in the Federal Reserve Bank of New York’s Markets Group.

Marco Cipriani is a research officer in the Bank’s Research and Statistics Group.

Philip Mulder is a senior research associate in the Bank’s Research and Statistics Group.

Neha Shah is a policy and market analysis associate in the Bank’s Markets Group.