How the Fed Changes the Size of Its Balance Sheet: The Case of Mortgage-Backed Securities -Liberty Street Economics

How the Fed Changes the Size of Its Balance Sheet: The Case of Mortgage-Backed Securities 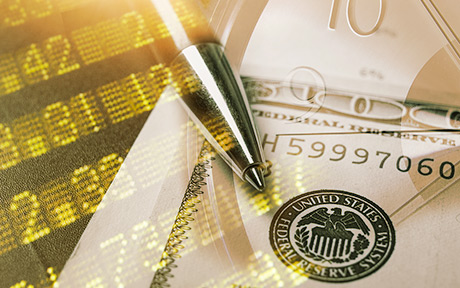 In our previous post, we considered balance sheet mechanics related to the Federal Reserve’s purchase and redemption of Treasury securities. These mechanics are fairly straightforward and help to illustrate the basic relationships among actors in the financial system. Here, we turn to transactions involving agency mortgage-backed securities (MBS), which are somewhat more complicated. We focus particularly on what happens when households pay down their mortgages, either through regular monthly amortizations or a large payment covering some or all of the outstanding balance, as might occur with a refinancing.

As we did in our previous post, we start with a set of simplified balance sheets, shown in the next exhibit. Three of the balance sheets are for the same actors as before: the Fed, the banking sector, and the public.

We replace the balance sheet of the Treasury, which we won’t need to look at, with the balance sheet of an issuer of MBS. The MBS issuer could be one of two government-sponsored enterprises—Fannie Mae and Freddie Mac—or the government corporation Ginnie Mae. All three are agencies that guarantee the MBS into which individual mortgages are pooled. For simplicity, we will refer to these institutions as “MBS issuers” in this post. 
MBS Transactions and the Fed’s Reinvestment Policy
To understand the effects of the Fed’s reinvestment policy in this context, we need to describe the effects of households’ mortgage payments (principal and interest) on the balance sheets of all actors.

We start by considering the case of a principal payment of $1 on a mortgage, assuming the Fed holds the MBS associated with that mortgage. The next exhibit shows the end result of such a sequence of transactions. 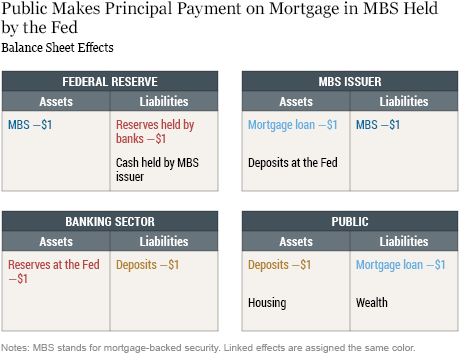 If the Fed did reinvest the proceeds it received from the MBS, its holdings of MBS would go back up and banks’ holdings of reserves would go up as well. Overall, as our previous post showed with respect to the reinvestment of Treasury securities, the Fed’s balance sheet would be unchanged. That said, there could be a lag between the time the Fed receives cash from an MBS paydown and the time it purchases a replacement, owing to the way MBS trade and settle. There could be some temporary ups and downs in the Fed’s balance sheet numbers as a result.

The next exhibit considers a payment from the public of $10 that represents a combination of principal paydown ($1) and payment of interest ($9). 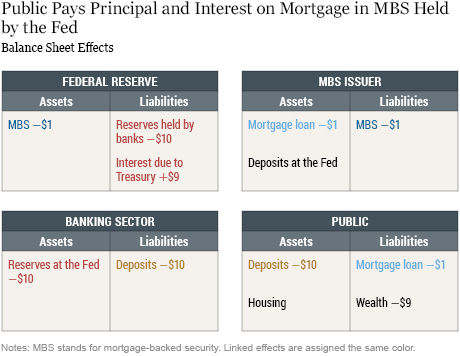 In our previous post, we assumed that whenever the Treasury redeemed a security, it would issue a new security to keep its debt at a constant level. A similar assumption can be made in the case of MBS issuers. While some households pay down their mortgages, other households take out new mortgages. In the next exhibit, we look at what happens in such a case. 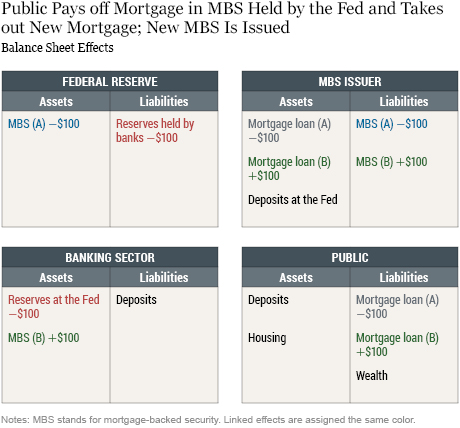 Suppose a family relocates to a new city, selling its house and purchasing a new one. We assume that the original $100 mortgage was part of an MBS held by the Fed and that the new mortgage, also for $100, is put into a new MBS. If the Fed no longer reinvests the proceeds it receives, the new MBS will be purchased by someone else, in this case a bank. For simplicity, we assume that the value of the new MBS is equal to that of the old MBS.

From the perspective of the public, nothing has changed, other than the fact that one loan has been replaced by another of equal value. Similarly, for the MBS issuer, one loan replaces another on the asset side, and one MBS replaces another on the liability side. The banking sector has replaced reserves with the new MBS on the asset side of its balance sheet. Finally, from the Fed’s perspective, the paydown of the MBS is accompanied by a decrease in the amount of reserves as the size of the Fed’s balance sheet decreases.

In this blog post, we have described the mechanics of balance sheets related to purchases and redemptions of agency MBS. Compared to the case of Treasury securities, which we discussed in our previous post, the key difference is related to the fact that the timing of repayment of MBS is not predictable and depends on the behavior of homeowners. Despite these differences, the ultimate effect on the Fed’s balance sheet is very similar for MBS and Treasury securities. When these securities mature or are paid down, the size of the Fed’s balance sheet and the supply of reserves both decrease.

Brett Rose is an assistant vice president of the Bank’s Markets Group.

FOMC ought to be selling $50-100bn per month of MBS given current market conditions. Demand for MBS is high and unlikely to change. Also, the drop in agency issuance since Q4 2016 has caused a precipitous surge in pricing for 1-4 whole loans in the secondary market. Lenders are seeing record low profits selling into the conforming markets for MBS. Large aggregators are bidding very aggressively. If anything, there is a striking shortage of DURATION in the markets.