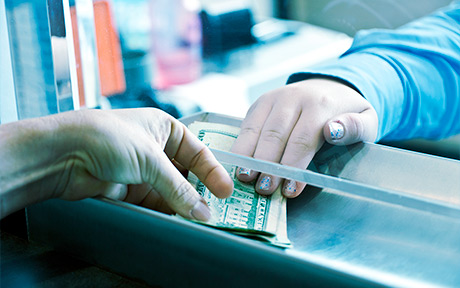 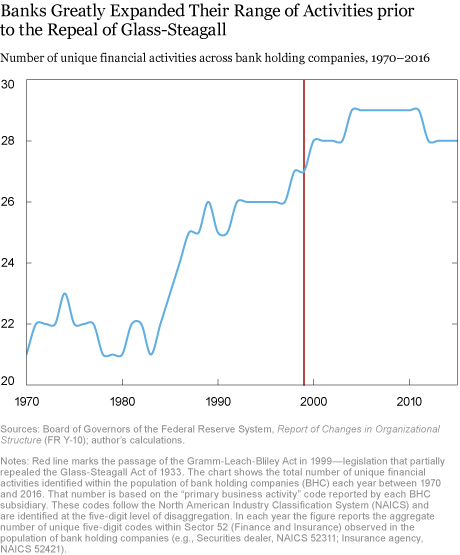 Perhaps instead of looking at BHCs as a whole, we should look specifically at BHCs that converted into financial holding companies (FHCs), the legal charter introduced by the Gramm-Leach-Bliley Act (GLBA) that allowed firms to expand more freely across a broader set of activities. FHCs may have be the ones that actually chose to expand, but their dynamics could be lost within those of the broader population. Out of 5,354 BHCs in existence at the end of 1999, 526 became FHCs between 2000 and 2001. The chart below shows how the scope of financial activities has fluctuated for those FHCs and for all other (non-converting) BHCs, relative to 1999. Somewhat contrary to expectations, it seems that FHCs and BHCs experienced virtually identical dynamics in the post-1999 years, with no upward trend detectable for either group. 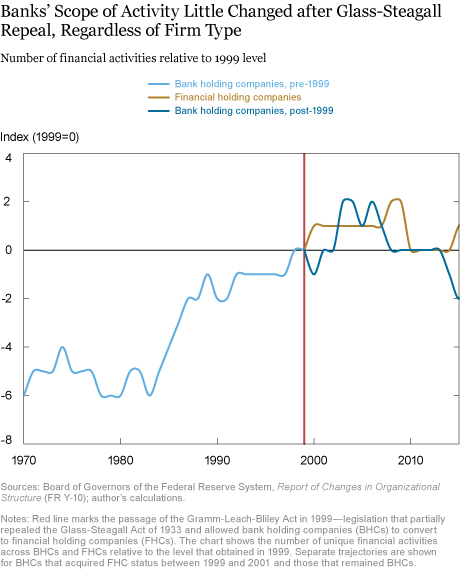 New Activities or More of the Same?

Perhaps the lack of expansion into entirely new activities since 1999 indicates that the passage of GLBA and the repeal of Glass-Steagall were more about lifting limits on activities that banks were already pursuing, since the scope of permissible activities had already been expanded for decades as interpretations of banking laws evolved (see Omarova, pages 1040–55). And so the removal of such limits may have freed banks to finally scale up those nontraditional activities significantly. If that were the case, we should see a marked change in the income-generation process of BHCs in the post-GLBA years: nontraditional activities are more typically associated with fee-based revenues for services rendered, rather than with interest from credit intermediation. Hence, an expansion in nontraditional activities should be reflected in a big increase in the noninterest component of BHCs’ total operating income after 1999. However, this is also not the case. As the chart below shows, BHCs’ noninterest income ratio steadily increased throughout the 1990s but had basically peaked by the time GLBA kicked in. 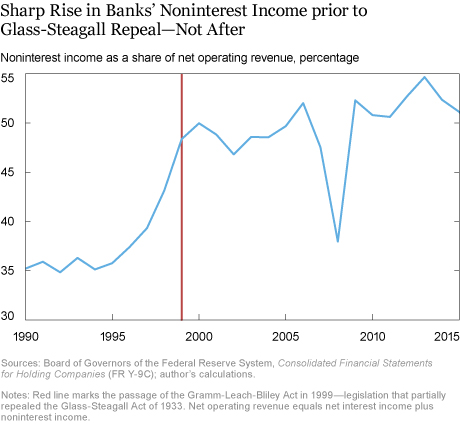 Mark: Thank you for your comment. Even though you are correct that the Krugman article does not explicitly mention Glass-Steagall, it was, as far as I am aware, the article that coined the concept of “boring banking.” In addition, to me, that article refers to Glass-Steagall implicitly when it refers to the evolution of banking following its Great Depression collapse, as in this excerpt: “… The banking industry that emerged from that collapse [The Great Depression] was tightly regulated, far less colorful than it had been before the Depression, and far less lucrative for those who ran it. Banking became boring … “ The Glass Steagall Act of 1933 was the main piece of legislation that imposed that tighter set of activity restrictions on banks. In my follow-up post, published on August 2, I actually suggest that banking really never “became boring”: tighter regulation was put in place and certain entities were restricted by it, but intermediation activities continued, undertaken by entities not subject to those restrictions. Link to follow-up post: http://libertystreeteconomics.newyorkfed.org/2017/08/were-banks-ever-boring.html

Strange choice of article to link in the first paragraph. Krugman never mentions Glass-Steagall in the linked piece, and in fact he dates the relevant period of deregulation (early 80s) to basically the same period you use to refute the “boring bank” hypothesis. There are lots of people who have repeatedly and explicitly advanced the “narrative underlying this [boring bank] argument,” but Krugman has never really been one of those. The reality of what *he* has argued has usually been more complex…(Glass-Steagall is not the only regulation that matters, and a significant portion of the risks to the modern system of banks and shadow banks would be out of scope of G-S in any case)