While the content of the Markets Data Dashboard is not new, the information is aggregated and centralized in a new interface that provides all of the markets data published by the New York Fed. These data are updated as results are released to the public. Users of existing data feeds from the New York Fed should note that the Markets Data Dashboard does not affect delivery of those data feeds.

Let’s walk through the Markets Data Dashboard to explain what users can find there. First, take a look at the new interface: 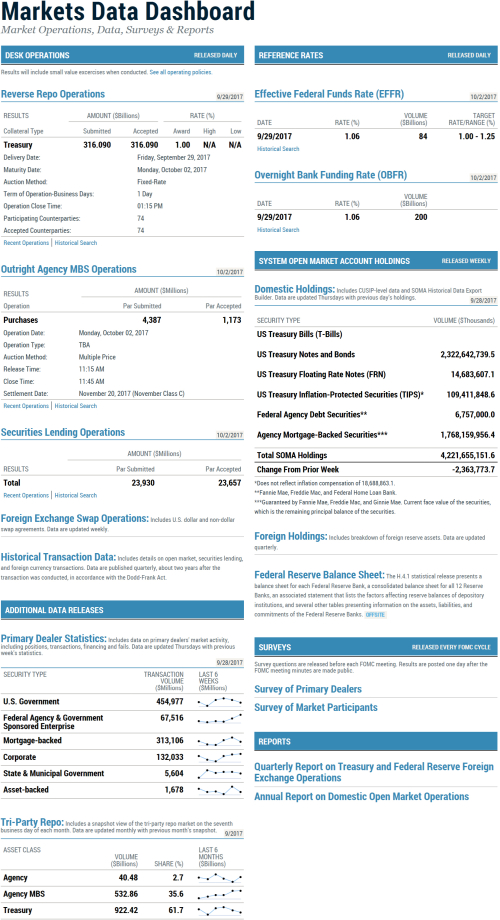 Desk Operations: The Desk Operations section of the Markets Data Dashboard contains the results of all operations conducted by the New York Fed’s Open Market Trading Desk (the Desk). This section includes the results of any small value operations conducted as authorized by the Federal Open Market Committee (FOMC) for operational readiness. From this section, you can also get access to the Desk’s statements and operating policies, and historical transaction data releases, which are published quarterly with a lag of approximately two years.

Reference Rates: The New York Fed publishes two reference rates—the effective federal funds rate (EFFR) and the overnight bank funding rate (OBFR)—daily around 9:00 a.m. Those rates reflect the previous business day’s trading. One of these rates, the EFFR, is used by the FOMC as its operating target for monetary policy implementation. Additional benchmark rates based on overnight repo transactions collateralized by Treasury securities will be published in 2018, and will be incorporated into this section as well.

System Open Market Account Holdings: The System Open Market Account (SOMA) holds dollar-denominated assets acquired through past open market operations, as well as investments of foreign currency acquired through past foreign exchange operations. The weekly release of dollar-denominated SOMA holdings details the total value of the various securities (including Treasury securities and agency mortgage-backed securities) and the total change in value from the prior week. The foreign holdings in the SOMA are released on a quarterly basis. This section of the Markets Data Dashboard also includes a link to the weekly release of the Federal Reserve’s H.4.1–the statistical release that represents the consolidated balance sheet of the Federal Reserve and all twelve Reserve Banks.

Surveys: The New York Fed conducts surveys of market expectations in connection with each of the eight FOMC meetings per year. These surveys query both primary dealers and a broader range of other market participants. The questions in the surveys are posted on the New York Fed’s website simultaneously with their transmission to market participants before each FOMC meeting, and the results are posted one day after the release of the minutes for the corresponding meeting.

Jordan Pollinger is an assistant vice president in the Bank’s Markets Group.