« Price Impact of Trades and Limit Orders in the U.S. Treasury Securities Market | Main | The Impact of Import Tariffs on U.S. Domestic Prices » 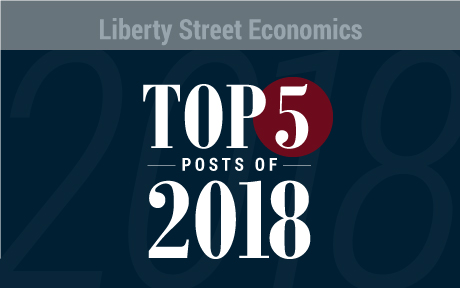 Bitcoin and other cryptocurrencies have been in the headlines throughout 2018, particularly because of their wild gyrations in value. In this Q&A, Michael Lee and Antoine Martin, economists in the New York Fed’s Money and Payment Studies function, offer some insight about how cryptocurrencies are particularly useful in situations where trust is absent. (February 9)

Import tariffs are on the rise in the United States. One of the objectives of these new tariffs is to reduce the U.S. trade deficit. Although more costly imports are likely to reduce the quantity of imports into the United States, our bloggers argue that U.S. exports will also fall. That is not only because of other countries’ retaliatory tariffs on U.S. exports, but also because the costs for U.S. firms producing goods for export will rise. The end result is likely to be lower imports and lower exports, with little or no improvement in the trade deficit. (August 13)

As authorized under the Dodd-Frank Act of 2010, the FDIC developed a “single point of entry” (SPOE) strategy with the goal of ending “too big to fail.” Under SPOE, healthy parent companies bear the losses of their failing subsidiaries. Our bloggers contend that this strategy would have made the parents riskier, relative to their subsidiaries. They find a difference of opinion when examining whether bond raters and investors share their view. (March 5)

The New York City subway system is plagued by delays and frequently fails to deliver riders to their destinations on time. Although these delays are a headache for anyone who depends on the subway, they do not affect all riders in the same way. Our bloggers explain why subway delays disproportionately affect low-income New Yorkers. (June 27)

By Nicole Gorton and Maxim Pinkovskiy

Our bloggers open a series of three posts that explore the forces behind the persistence of historically low interest rates in recent years. They propose an alternative hypothesis that centers on the premium associated with safe and liquid assets, arguing that the increase in this premium since the late 1990s has been a key driver of the decline in the real return on U.S. Treasury securities. (February 5)