« The Perplexing Co-Movement of the Dollar and Oil Prices | Main | How Much Value Was Destroyed by the Lehman Bankruptcy? » 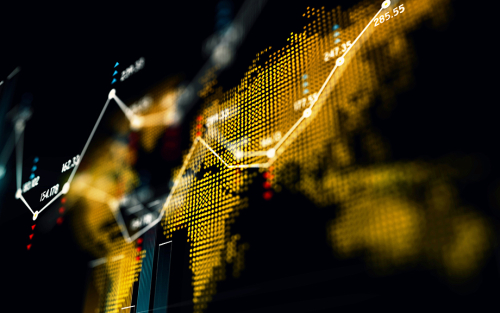 Achieving and maintaining global financial stability has been at the forefront of policy discussions in the decade after the eruption of the global financial crisis. With the purpose of exploring key issues in international finance and macroeconomics from the perspective of what has changed ten years after the crisis, the fourth bi-annual Global Research Forum on International Macroeconomics and Finance, organized by the European Central Bank (ECB), the Federal Reserve Board, and the Federal Reserve Bank of New York, was held at the ECB in Frankfurt am Main on November 29-30, 2018. Participants included a diverse group from academia, international policy institutions, national central banks, and financial markets. Among the topics of discussion: the international roles of the U.S. dollar, the evolution of global financial markets, and the safety of the global financial system.

The International Roles of the U.S. Dollar

While much of the research in the pre-crisis period emphasized the role of the U.S. dollar as the key international currency in trade invoicing and official reserves, the global financial crisis raised the prominence of financial roles of international currencies. The coexistence of a dominant currency in both trade invoicing and in global finance was explored by Gita Gopinath, in “Banking, Trade and the Making of a Dominant Currency” (coauthored with Jeremy Stein). Their main argument is that the use of the U.S. dollar in international trade invoicing, bank funding, corporate borrowing and global foreign exchange reserves can be mutually reinforcing. If firms in emerging markets endogenously take on currency mismatches by borrowing in U.S. dollars, a dominant currency can have negative repercussions on financial stability.

According to Guido Lorenzoni and his coauthor Luigi Bocola in “Financial Crises, Dollarization, and Lending of Last Resort in Open Economies,” fear of financial instability increases demand for foreign currency assets by savers in emerging markets, and dollar denominated deposits are used to provide insurance to savers in the event of financial crises during which domestic currency tends to depreciate. This saver’s insurance motive enables firms to borrow more in dollars due to the lowered cost of dollar funding. According to Lorenzoni, savers do not internalize the financial instability effect of their saving in dollar deposits that can generate multiple equilibria, with the bad equilibrium characterized by excess dollarization and financial instability.

One interesting observation in global financial markets since the crisis has been an apparent breakdown of covered interest parity (CIP). While there is already a quite voluminous literature on this puzzling phenomenon, Alfred Wong and Jiayue Zhang, in “Breakdown of Covered Interest Parity: Mystery or Myth?,” look at the basis for seven currency pairs and conclude that CIP patterns are well explained by the presence of asymmetries in counterparty and liquidity risk in the domestic and foreign money markets, and market participants have become more acutely aware of those since the crisis. The authors tend to dismiss explanations based on limits to arbitrage or regulatory constraints; indeed, they also argue that the basis is not a dollar phenomenon as it is visible even in the single-currency swap market. Saleem Bahaj and his coauthor Ricardo Reis, in their recent paper “Central Bank Swap Lines,” argued that central bank swap lines can put a ceiling on CIP deviations and affect their average size and distribution, closely mimicking discount-window credit from the source central bank to the recipient-country banks using the recipient central bank as the bearer of the credit risk. Lively conference discussion pointed to key institutional features that questioned key findings in the literature on CIP, challenged conclusions about the effects of central bank swap markets, and noted the differential pricing of dollar liquidity to different market participants.

Another theme since the crisis is the existence and importance of the so-called global financial cycle, referring to common fluctuations in financial activity on a global scale, possibly partly driven by U.S. monetary policy. In “Global Financial Cycles and Risk Premiums,” Moritz Schularick and coauthors Òscar Jordà, Alan Taylor, and Felix Ward document equity price synchronization across seventeen advanced economies and find the correlations in equity prices have increased significantly in recent years. Increasing synchronization of risk appetite across global equity markets is argued to be the main driver of this phenomenon, and exchange rates do not perfectly insulate economies from fluctuations in risk appetite across global equity markets. Maurizio Habib and his coauthor F. Venditti, in “The global capital flows cycle: structural drivers and transmission channels,” using monthly data for both advanced and emerging market economies starting in 1990, demonstrate that fluctuations in risk appetite are the main drivers of capital flows cycles. Conference participants debated the drivers and measurement of risk appetite, and the meaning for the global cycle. Many substantive questions persist about how the global financial cycle has evolved and its structural drivers.

One quantitative issue is the extent to which lower financing costs driven by U.S. monetary policy can lead to increases in the credit supply globally. In “International Spillovers and Local Credit Cycles,” Sebnem Kalemli-Özcan and coauthors Yusuf Soner Baskaya, Julian di Giovanni, and Mehmet Fatih Ulu examine data for Turkey. They show that the funding cost differential of a firm borrowing in local currency versus foreign currency diminishes at times of accommodative global financial conditions, especially for those banks with large non-core liabilities, leading to significant domestic credit expansion. The authors, however, do not find reliable evidence that exchange rate changes affect interest rates more for firms with a high share currency mismatch in the balance sheets, which is still a concern in several emerging economies.

The implications of gross capital flows for financial stability and regulation have also been discussed, with the view that these flows can be very important for stability. Although most of the recent research on international capital flows highlights the destabilizing role of foreign capital flight at the time of financial stress, Ricardo Caballero and his coauthor Alp Simsek, in “A Model of Fickle Capital Flows and Retrenchment,” emphasize the important stabilizing role of retrenchments in providing liquidity insurance in country-specific fire sales. Discussion of the presentation centered on open questions regarding the role and drivers of retrenchments, and their broader implications for capital flow management.

Is the Global Financial System Safer Ten Years after Lehman?

Another critical theme discussed at the conference was the role of global banks and their safety ten years after the global financial crisis. Sujit Kapadia and coauthors David Aikman, Andrew Haldane, and Marc Hinterschweiger, in “Rethinking Financial Stability,” provide an extensive overview of the literature on the progress of the regulatory reforms designed to achieve financial stability after the global financial crisis. Friederike Niepmann and Viktors Stebunovs, in their paper “Modeling Your Stress Away,” highlight a potential disadvantage of stress tests that are run by banks by comparing 2014 and 2016 European Banking Authority stress tests. In particular, the authors argue that projected credit losses of banks were smoothed across the tests through systematic model adjustments. Enisse Kharroubi and his coauthor Giovanni Lombardo, in “International Coordination of Monetary and Macro-Prudential policies,” emphasize the importance of international macroprudential policy coordination in an interlinked global financial system.

In the keynote speech, Luc Laeven noted that banks around the world appear safer now, as they are better capitalized, better regulated thanks to well-established macroprudential frameworks, and are better supervised. However, he also noted that more progress has to be made to achieve a safer financial system as a whole. He highlighted, for example, the fact that regulators need to understand the source of booms in order to optimally design macroprudential policies, need to put more emphasis on nonbank sector regulations, and to take a global and systemic perspective to balance the benefits and risks of international banking.

A policy panel, “Is the global financial system safer ten years after Lehman and what are the risks undermining global financial stability going forward?,” presented viewpoints on many of the topics raised through the conference. Moderated by ECB board member Benoît Cœuré, the panel featured former ECB Vice President Vítor Constâncio, Federal Reserve Bank of New York senior vice president Linda Goldberg, IMF director Gian Maria Milesi-Ferretti, BlackRock senior researcher Tara Rice and Bruegel co-founder, and Peterson Institute for International Economics senior fellow Nicolas Véron. Discussion focused on the relative gaps in policies aimed at non-banks, which now have a more important role but generally do not have access to central bank lender of last resort and liquidity facilities; the rise in global debt levels and the re-emergence of securitized financial products; safe asset shortages and gaps in the global financial safety net; the unfinished agenda of European integration as keeping the euro from a greater role internationally; and the potentially important role of global imbalances as a deeper cause of financial stress around the globe. Progress overall has been made toward safety, but there is still considerable room for future improvements.

Roland Beck is a principal economist in the European Central Bank.

Linda Goldberg is a senior vice president in the Federal Reserve Bank of New York’s Re-search and Statistics Group.

Livio Stracca is a deputy director general at the European Central Bank.