How Much Value Was Destroyed by the Lehman Bankruptcy? -Liberty Street Economics 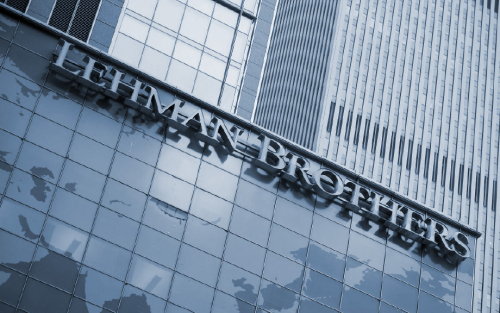 How Is Value Destroyed in Bankruptcy?
In the bankruptcy literature, value destruction is identified with the direct and indirect costs of bankruptcy. The direct costs are the expenses paid to third parties, such as legal and accounting professionals, for services provided during bankruptcy. The indirect costs are opportunity costs of various kinds that impinge on the firm, its creditors, and its stakeholders. Prior to bankruptcy, customers stop buying products and services, lenders demand stricter terms, and managers get distracted, reducing the distressed firm’s profitability. Following a bankruptcy filing, the firm’s customers and clients may not be able to purchase the same services elsewhere, while employees may suffer wage losses if their skills are not transferable to other firms. In addition, creditors may lose the value of assets trapped in lengthy bankruptcy proceedings, either because the assets cannot be located or because of disagreements with the bankruptcy estate.

1. Creditor Recovery in Lehman’s Bankruptcy
In nominal terms, creditors fared better than initially expected, recovering about one-third or more of their claims, compared to an estimate of 10 percent at the beginning of the bankruptcy proceedings. A major reason for the improved recovery was the strong rebound in asset values during the lengthy bankruptcy process. However, as a result of the delays, the present value of recovery for Chapter 11 creditors was appreciably lower, and creditors lost the liquidity value of their assets over the resolution period.

2. Lehman’s Bankruptcy Expenses
The direct costs of Lehman’s bankruptcy include professional and consulting fees to third-party professionals, compensation and benefits to employees involved in administering the bankruptcy, and outsourced service costs. Given its complexity, lawyers involved in the bankruptcy initially expected the fees to be large and, indeed, we find that fees were substantial, amounting to about $6 billion for Chapter 11. These numbers reinforce recent concerns about rising bankruptcy costs as a consequence of the increasing size and complexity of distressed companies’ capital structures.

3. Customer and Employee Losses in Lehman’s Bankruptcy
What were the losses to Lehman’s customers, clients, and employees as a result of its bankruptcy? We find that Lehman’s investment banking customers were generally able to transfer their accounts to solvent broker-dealers, with the exception of some institutional customers who relied on specialized brokerage services. In contrast, Lehman’s equity underwriting clients lost substantial value. Lehman’s employees mostly found jobs at other banks, but some had difficulty finding jobs in the financial industry, whether due to the downturn in the financial sector or a lack of transferable skills.

Total Value Destruction in Lehman’s Chapter 11 Bankruptcy
Our estimate of the value destruction from the Lehman bankruptcy is substantial, although some losses were likely due to economic distress, or represented value transfers to other parties. In particular, we estimate value destruction to be on the order of $46 billion to $63 billion, or between 15 percent and 21 percent of Lehman’s pre-bankruptcy consolidated assets. These estimates exclude fees and expenses from the SIPA proceedings, which are an additional $1.4 billion, and the costs of resolving Lehman’s subsidiaries outside of U.S. legal jurisdictions. 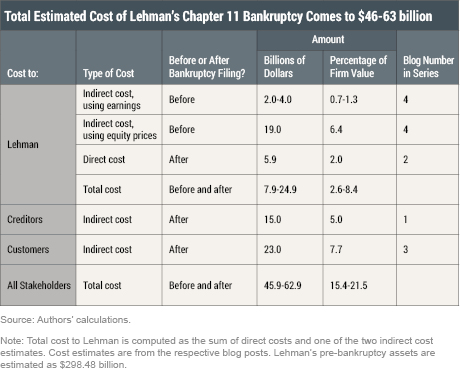 Thank you for your feedback. We agree it’s interesting to think about the alternatives when no formal bankruptcy process, such as chapter 11, exists. One alternative is an out-of-court settlement, such as an exchange offer. Evidence shows that the direct costs can be lower for exchange offers compared to chapter 11. The possibility you suggest -- that creditors seize assets on an individual basis --- would likely result in significant litigation over claim priority, resulting in delays and legal expenses. Moreover, these alternatives may not be feasible for a large, complex firm such as Lehman. In any case, these are complicated issues, and beyond the scope of our current focus.